“There was a palpable silence in the class,” a professor writes, “as I talked about the 620,000 people who died, the 4 million slaves who were liberated, the President (in my opinion, our best President) who gave his life for this cause” (134). He continues:

They were really feeling it now, as was I. My voice nearly cracked. M, L, L, and A were moved almost to tears; M actually had to excuse herself from the room to take a breath in the lobby. As she was leaving, P said, “This makes me so sad that they had to go through this.” Then B added, “But thank God they did.” Silent nodding throughout the room. … After something of a moment of silence, we launched into a discussion of Chesnut’s diary. I was stunned by their reaction: they loved it! … I think Chesnut’s diary satisfied some of the curiosity they had about the ‘other’ perspective on slavery, but still, they were struck by the sympathy she had for the slaves she witnessed at auction … . I was struck, over and over, about how active and imaginative their readings were: seizing on suggestive moments in the text—was she unhappy, depressed, longing for liaisons with other men, antislavery, fully on board with secession?—to offer informed (and sometimes quite provocative) readings of Chestnut’s “inner life.” I was also struck by how much sympathy the women in the class—especially the black women—had for Chesnut” (134–135).

“‘Jack,’ E asked. ‘Are we the best class you ever had?’” The professor’s written response: “They are shaping up to be” (132). His comments are all the more moving because, by this point in Earl Shorris’s The Art of Freedom, you know that the professor is working with a ragtag collection of bright and ambitious, but downtrodden, inner city adults—not clever undergraduates at an elite institution. 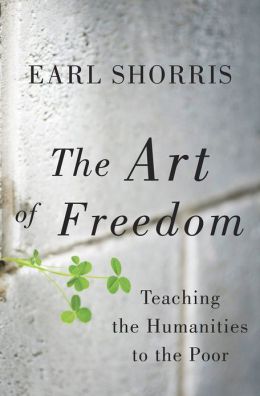 That’s because he’s a professor for the Clemente Course, a program started by Earl Shorris to teach the humanities to the poor. These reports give neither the names of the professors nor their students, presumably to protect their identities. But they are great fun! Given that they teach smart, privileged undergraduates for their day jobs, it’s uplifting to read their assessment of students struggling to pay the rent and read Dante. “I can’t imagine my Tufts students,” a professor comments, “ever having the temerity to ask such a question, to question Dante’s basic architecture of The Inferno” (130).

To his credit, Shorris includes reports that are, shall we say, less rousing. I found these accounts even more enjoyable, as when a teacher recalls her class’s discussion of Augustine’s Confessions: “Augustine tells four conversion stories in these pages, all of them thru books. I tried to get them to think about that, & about the possible fact that his experience mirrors theirs right now, of changing your life thru books. Thud went that idea” (138).

Thud went that idea, indeed. Can you change your life through books? You’d think The Art of Freedom would offer a resounding yes, a barbaric yawp over the ghettos of the world. But this book does not offer a battle cry for freedom. It’s not a bang—though, fortunately, it’s not a whimper, either. In a generous review, the Wall Street Journal embraces Shorris’s account of his efforts to provide quality educational opportunities to the poor. Alexander Nazaryan, in another favorable review, explains why the book was so frustrating for me, but so captivating for him: “I think it is fair to say that you read Shorris—well, I read Shorris—not for the depth of his thought, but the intensity of his convictions.” I tend to think that depth of thought and intensity of convictions are related, but, anyway, Nazaryan’s assessment sounds about about right.

Shorris has interesting stories to tell, occasionally accompanied by fabulous asides. All in all, though, The Art of Freedom has the feel of an aged rock star offering his memoirs to an adoring public. The tour stops are in the poorest parts of town this time, but the booze is still there. Seriously: the book has nine pages that reference beer (36, 37, 90, 95, 97, 98, 148, 221, and 222), but only six that reference Aristotle (37, 39, 67, 91, 105, and 119). To his credit, Shorris is not the only one drinking the beer. Nevertheless, alcohol serves as, shall we say, a leitmotif. I would not have known that a particular area of Alaska is neither wet nor dry but “damp,” that is, you can possess a bottle of beer, but you cannot sell it. I know it now, though, because I have read Earl Shorris’s The Art of Freedom (148).

The result: the book becomes all too predictable. Memories of the tour are consistently breathtaking only if you’re already a fan. If you’re not, or you don’t yet know all the tunes, then the start of the book is wonderful, but the rest of it is simply more of the same. By chapter 13—when Shorris receives a phone call from Sydney—you know in your heart that he’s going to work with aborigines.

And he does. And that’s great. Good for him. I’m glad he did it. But, to use a nice Humanities word, I kept wondering what the telos of the book was supposed to be. At one point, Shorris says that democracy is the telos of the Clemente Course, equating it with freedom, especially political freedom (253). But given that the book is largely anecdotal, it’s hard to say that it makes an empirical case for the course on those grounds. Even worse, his identification of democracy as the telos of the course makes the course sound unnecessary wherever there is democratic government. Fortunately, Shorris’s own practices speak against this unfortunate conclusion.

I thought that perhaps Shorris didn’t make a case for the course in this book because he had done so previously, perhaps in his New American Blues: A Journey through Poverty to Democracy. Apparently not, for that work is criticized by Jo-Ann Mort in “Welfare’s State” as “a piecemeal, insufficient effort to deal seriously with the huge pockets of systemic poverty in the United States.” She complains that it’s “filled with mis-characterizations, some quite gratuitously nasty.”

In The Art of Freedom, Shorris can be blunt and unsympathetic, but perhaps this occasional lack of sympathy is unfairly exaggerated by his overflowing tenderness towards the underprivileged. Viniece Walker, a woman convicted as a conspirator in the murder of her own grandmother, receives a careful, sympathetic portrait (13–14). By contrast, John Marsh, a professor who struggles to implement Shorris’s work, does not. About him, Shorris writes, “I do not know John Marsh, but I think it is best that he no longer teaches a Clemente Course” (68). The sharpness of this assessment surprised me, given the kindness extended to others.

I was unsurprised to learn that John Marsh became a critic of the Clemente Course. In one of his academic articles, available (to their credit) at the Clemente Course website, Marsh critiques Shorris explicitly: “Shorris never stated explicitly how the political life would lead the poor out of poverty. Presumably, the poor were to organize, though against whom or for what Shorris never says. That he arranged for graduates to receive college credit for the course, however, suggests the primary way he imagined the poor would make their way out of poverty—by going to college” (209).

Marsh rejects this view. He writes, “It bears saying, then, even if it risks belaboring the obvious, that the vast majority of the poor and, especially, the working poor are poor not because they are not educated enough, but because they do not work enough (because of either unemployment, disability, or disinclination) or because they are not paid enough for the work that they do” (211). Even worse for Shorris, Marsh suggests that people embrace his approach precisely because it makes them feel better about themselves (211).

I wish that Shorris has considered Marsh’s arguments and responded to them directly. The Art of Freedom, is inspirational and uplifting, and I found myself wanting to teach a Clemente Course. But it’s a surprisingly troubling book, because it suggests that what’s wonderful on the small scale can be replicated throughout the world, without offering a way to do it. It’s hard to imagine finding four or five exceptional professors (19–20) to teach every twenty two students (29) at the cost of $2,000 a student (40).

After considerable thought, I’ve decided that this book can make a case for something. I don’t remember Shorris ever stating it this way, but here it is in a single word: redemption. Redemption is a religious word, but it’s a word taken from the slave market, entirely appropriate for a book titled The Art of Freedom. The Clemente Course offers a kind of secular redemption, and Shorris’s anecdotes show the beauty and grandeur of second chances. People in their late twenties and early thirties who have only recently become ambitious, hardworking, and academically minded do not generally receive second chances. The Clemente Course offers them one. It’s not about democracy; it’s about redemption.

My suggestion is in tension with Shorris’s own beliefs. As he makes clear, he is “a man with little time for religion” (90). There’s a deep and profound irony here, though, because many of the people involved in the work have a connection to religion. Shorris is honest enough to let people speak with their own voices, and it is often a religious one that we hear. While Shorris wants “to spread the gospel of the Clemente Course” (249), many are just as, or even more concerned about, a different gospel, an older one. They understand redemption in a broader, and yes even in a religious, sense.

I don’t see this cooperation with believers as problematic at all. The church offers the language of redemption to justify the work; it can also offer an account of how to do it. The overwhelming cost of expanding the Clemente Course seems more attainable when modeled after, or even connected to, the work of churches throughout the world. Some churches are cathedrals; others are small affairs, taking place in rented spaces or even in the open air. So, too, the name brand Clemente Course will always be an impressive affair, taught by well known professors and offering college credit. But others could be smaller affairs, with people who enjoy Socrates teaching those who have not yet read him, even if the teachers do not have doctoral degrees and the students do not earn college credit. Either kind of course would be a lasting legacy for Earl Shorris, a man who pursued, even at the end of his life, the laudable goal of finding excellent teachers for those who do not have them

The Danger of Constitutionalizing Policy Disputes: A Response to David Upham

Public institutions of supposedly liberal learning, which are increasingly alienating mainstream Americans, have no entitlement to public support.

An Education for This Republic