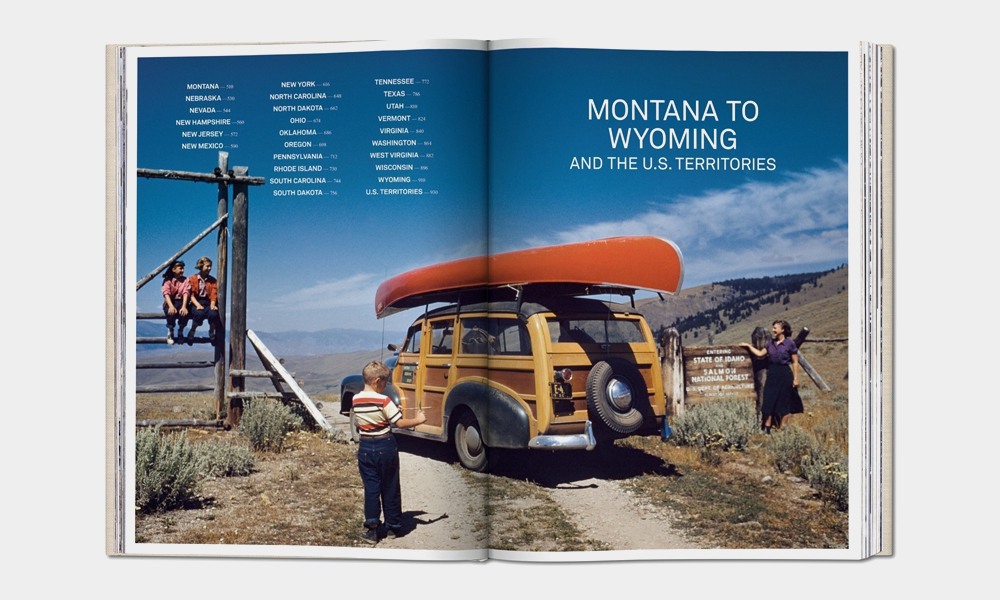 Forget about making America great again—in terms of sheer beauty, the country has always been amazing. And now there’s a book people can buy that is “armchair traveling at its best,” in the words of Reuel Golden.

Golden has edited National Geographic: The United States of America, a massive, gorgeously illustrated book that offers a state-by-state tour of the 50 states and the District of Columbia over the past 100 years. Collecting over 700 images from the archives of the D.C.-based National Geographic and accompanied by narrative captions and prefaces, the doorstopper chronicles American places over the last century from the jazz bars of New Orleans to the ski slopes of Colorado, the Hollywood Hills, the streets of Manhattan, a river baptism in Mississippi, and much more.

Photographs go from early black-and-white and autochrome exposures from the 1920s and 1930s into midcentury Kodachrome, then the harder-edged reportage of the 1970s and 1980s, and finally the digital images of the 1990s up to the present. Many are of people gazing in wonder at some of the country’s splendid vistas: the Grand Canyon, the big sky country of Montana, a massive football stadium in Indianapolis, sculptors on the rocky face of Mount Rushmore in Charles D’Emery’s photo from the 1930s. There are also more intimate moments: a couple walking down the boardwalk in Atlantic City, a woman holding up postcards from the back of a car, a country store in the South. In Norfolk, Virginia, a young sailor gets his first tattoo in a Paul L. Pryor shot from 1939. The caption notes that not too long ago, sailors were the only customers for tattoos.

There are also pictures that indicate the struggles America has gone through, particularly around issues of race. There is a powerful 1988 photograph by Jim Richardson of a boarded up shopfront in Atlanta. The boards are graffitied with statements like “Learn to teach yourself,” and “Respect our history, be black, be proud.” “Messages of positivity grace the streetscape in Sweet Auburn, Georgia, birthplace of Martin Luther King, Jr. and traditional center of Atlanta’s black community,” explains the caption.

Still, even the photos of the depressing aspects of American history can have a deep spiritual beauty to them. The overall effect is to tell a story that has well nigh been forgotten of late: that America is a grand and good place whose people value freedom and believe that their land is blessed. After spending time with The United States of America, one feels proud to be a citizen of this country and willing to make sacrifices for her betterment. With our modern world of digital luxuries, social media, and constant entertainment, it’s easy to forget how miraculous America looked to our ancestors coming here from around the world. Many of them were escaping some of the worst places on earth. That joy of discovery, of the sheer dynamic energy of America, is on every page of this book.

“The photos we chose and curated had to satisfy four criteria,” says Golden. “Firstly be great photographs or visually compelling in some way; secondly they had to tell something about the state; thirdly they had to be true to the spirit of the [National Geographic] and what it represented to its millions of readers. Also they had to be technically strong. What might have worked small in the magazine in 1956 might be less forgiving in a big book in 2016.”

If it seems a bit steep to charge $300 for a book, that’s what many a video gaming console costs, and an argument could be made that immersing oneself in The United States of America and her history is a far more rewarding experience than, say, “Grand Theft Auto.” This is a book that will stay in a family for generations.

“Working on this book reminded me of some of the things that attracted me to this country in the first place,” says Golden, a photojournalist and curator from the United Kingdom. “The beauty, the diversity, the sheer scale of everything, the contrasts between the different states, between the rural and the urban, between the man made and the natural. It’s a big country and arouses big emotions.”

The Politician Addressing a Law School Commencement is a Democrat