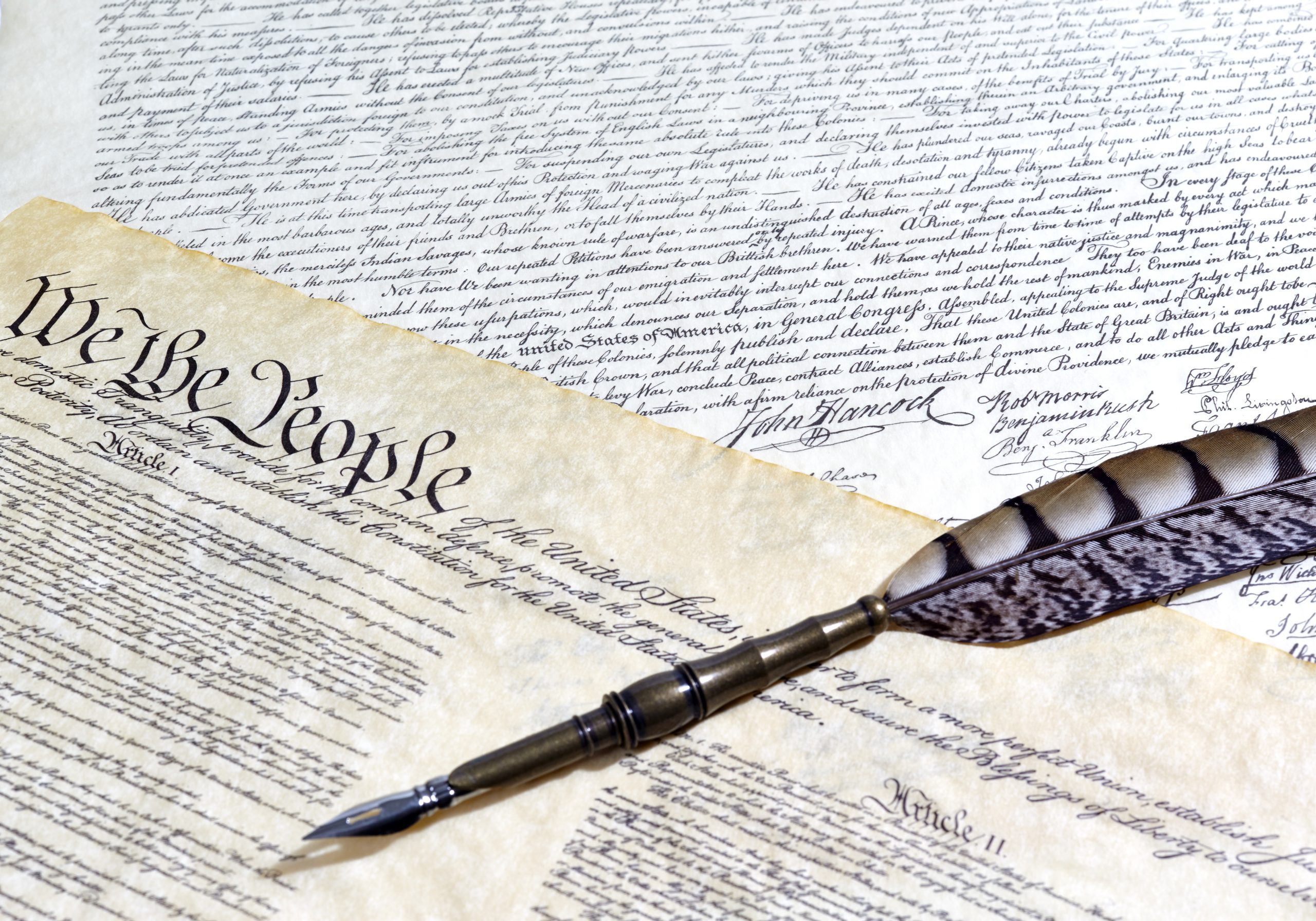 Along with Michael Rappaport, I participated in Michael McConnell’s “Big Fix” conference, held at Stanford Law School this past week. “Should We Amend the Constitution?” was the subtitle of the fun event. You can talk me into that, provided law profs don’t get to vote. A dismaying number of amendment proposals aimed to Europeanize the U.S. Constitution (for example, by importing the European and Canadian courts’ “proportionality” tests into our ConLaw, which I had thought could not get any worse). Others sought to make the republic yet more “democratic”—an endeavor that for n reasons, some ably stated by Brother Rappaport, merits firm resistance and, in the event of success, a bulk purchase of OxyContin.

Mercifully, all but one of the 30 or so proposed amendments went down in an impromptu straw poll. The lone proposal to garner a two-thirds majority was the actual Equal Rights Amendment that cratered back when. (I was among the conferees who voted for it. The ERA has since been enacted by RBG and Company so what difference does it make, at this point?)

In his characteristically gracious closing remarks, Michael McConnell noted the incongruity: for all the present discontent with the state of James Madison’s state there doesn’t seem to be a lot of enthusiasm for any particular amendment. Perhaps (I speculate) that reflects pervasive polarization. If so, ramping up our disagreements to a constitutional debate might only make things worse. Or perhaps (Professor McConnell gently suggested), our discontents flow from something other than the Constitution, and the instrument isn’t as bad as it’s often made out to be. Something like that tends to be my view. The Constitution isn’t perfect; but it’s a lot better than what we have now.

My own proposed amendments appear below. They were defeated (no surprise in a room where the median family income was somewhere north of $400,000—you’ll see). “My own” isn’t exactly right: I purloined the first amendment from the economist James Buchanan and the second from New York’s former Senator James Buckley. And granted, I may have peddled the amendments before on this site. Then again, everything worth saying is worth saying more than once, and the comments following the text of the amendments may contain some additional thoughts.

Section 1. For any Fiscal Year for which the Congressional Budget Office expects federal outlays to exceed revenues, the Secretary of the Treasury shall impose an income tax surcharge in proportion to each individual taxpayer’s Gross Adjusted Income during the closest calendar year, in such an amount and at such a rate as to cover the budget deficit for that Fiscal Year.

Section 2. The Congress shall have power to suspend the operation of this Amendment for any Fiscal Year by a vote of two-thirds of the members of each House.

Section 1. Federal transfer payments to state and local governments, including private entities established or directed by such governments, shall not exceed three percent of the federal budget for any Fiscal Year.

Section 2. This amendment shall take effect five years after its adoption.

First, they should be structurally compatible with the Constitution. They ought to treat the existing, hardwired structure (bicameralism, the separation of powers, federalism) as a given; they should ordain and establish decision rules, not distribution rules; and they should be politically neutral, in the sense of leaving substantive political decisions—prominently, decisions over the size of government—to the operation of the ordinary political process.

Second, they should have a long-term, veil-of-ignorance quality: you would choose this rule regardless to your expected position in society (now or going forward), and you should believe, with good reason, that the rule will hold up well under the various crises of human affairs and a vast range of political and economic circumstances.

Third, the proposed amendment(s) should fix a problem that cannot be fixed through ordinary political means. The two amendments I proposed satisfy these conditions; more in a sec.

The amendments belong together, for both have to do with fiscal matters: the practice of routine, peacetime debt finance; the increasing fiscal imbalance between the feds and the states, and the attendant consequences. Both seek to respond to a common set of problems, stemming from the same sources.

In 1960, neither amendment would have made the slightest sense. From the Founding up to that time, American fiscal policy rested on a firm consensus, namely that we run up debt in wartime and pay it back it peacetime. The idea of financing peacetime consumption with debt had never occurred to anyone. Likewise, federal transfers to states were very limited, and overwhelmingly dedicated to infrastructure investment (like the highway program, then winding down)—not to consumption.

Five years later, we entered a different world. The Great Society programs embodied a commitment to routine debt finance and to massive, consumption-based transfer programs to fund Medicaid, education, and more. A decade later, those programs began to eat away at the country’s fiscal health. They also created massive, deeply entrenched political constituencies. Another decade later, they proved to be irreversible. Three decades later, they are still irreversible, except much more so.

No plausible economic theory supports this practice. At the time, neo-Keynesians argued that debt finance would smooth out business cycles. It has since turned out that the cycles come and go, and debt finance lives through boom and bust. “Fiscal federalism” theorists defended transfers as a countercyclical policy; as a way of equalizing (locational) advantages; and as a way of harmonizing national objectives and local control. In five decades, not one of those theorists has found a single program that does any of those things. What most experts have found instead, and consistently, is that the programs drive fiscal excess at all levels of government; produce moral hazard and bailout expectations; create impenetrable intergovernmental bureaucracies; and divert 40, 50, 60, 70 percent of funds away from the nominal beneficiaries and into the pockets of entrenched provider groups.

The national debt—including unfunded obligations, as one should—approaches $100 trillion. Federal funding approaches a third of many states’ budgets, and we are one economic downturn away from outright state insolvencies. If you think the national debt is not a problem (because we will grow out of it, or because we will pay the Chinese back in peso equivalents), okay. If you think the fiscal imbalance is not a problem (because fiscal federalism in Argentina and Brazil works just fine, or because we can always treat Illinois like Puerto Rico), fine.

If you do worry, you’ll share my further worry that there’s nothing we can do about any of this, for two reasons.

First: The twin commitments to debt finance and fiscal transfers rest on an overwhelming, unassailable social consensus, with three parts:

Second: Even if one could challenge this consensus in ordinary politics, the political system could not conceivably recommit to the constitutional, fiscal, federalism consensus of 1960. Fiscal credibility really is like virginity. That’s why it’s a fitting subject for constitutional treatment. Constitutions are commitment devices.

The proposed amendments are recommitment devices, necessitated by the demise of some of the unstated presuppositions that underpinned the Constitution. They do not enshrine any particular policy (any more than did the original Constitution). The Buchanan Amendment is consistent with any level of government spending, provided it’s paid for. The Buckley Amendment is consistent with any level of transfer payments, provided those payments are made to people, not to politicians.

I am not wedded to any of the details. For example, one could tie Jim Buchanan’s “deficit tax” to a gas tax, or a value-added tax. (Buchanan himself wanted the tax to be raised in the most inefficient, oppressive way possible, to teach voters a lesson.) I have tied it to the income tax because that tax cannot go away, and because the deficit tax mimics a collective judgment about progressivity that we have already made. But I’m open to other suggestions. Similarly, the sainted Jim Buckley would permit zero fiscal transfers; I have plugged in three percent to obviate any yammering to the effect that Stanford could still get research grants but Berkeley couldn’t. I realize that the ceiling would become a floor. I am willing to pay that price but I may be wrong.

Of this much I am entirely confident: In a constitutional moment of reflection and choice, no sentient human would choose our existing regime of unrestrained debt finance, uninhibited fiscal transfers, and institutionally entrenched self-deception. I have managed to persuade myself that people just might choose the Buchanan and Buckley amendments.

If you are wondering what reaction they prompted at the conference, after I made my presentation, Amy Wax (Penn) got up and said, “I’m with you but you are way too sanguine.” Whereupon Randy Barnett—seated, for the umpteenth time over the years, next to me on the panel—blurted out: “This is my first conference ever where someone has been even more despondent than Mike Greve.” Like I said, a fun event.

Did Richard Thaler Really Shift the Paradigm in Economics?

Nancy MacLean’s Democracy in Chains: The Deep History of the Radical Right’s Stealth Plan for America, a scurrilous attack on James M. Buchanan.

Up With Federalism? A Case for Cautious Optimism

The natural intuition is to think that federalism works in normal times and then gets in the way of prompt, effective responses to crises.