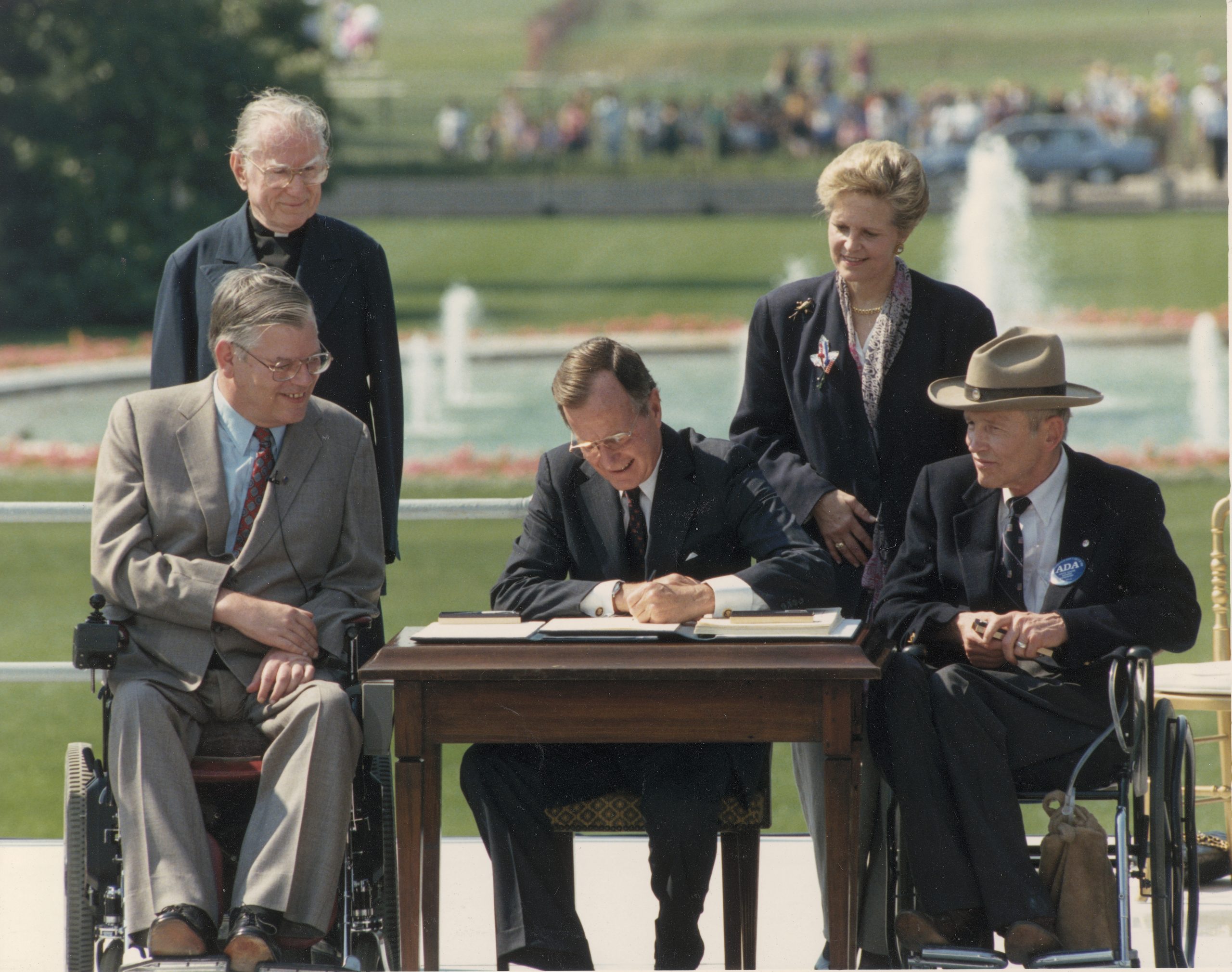 Looking back at the Americans with Disabilities Act, passed by Congress in 1990[1], one has to be struck by the extent to which the ADA’s lofty sentiments have been overwhelmed by its adverse results. If it’s true that the road to hell is paved with good intentions, then the ADA is a veritable Autobahn of wishful thinking gone awry. Yet no one seems inclined to reroute the ill-fated traffic; some states are even widening the highway with additional lanes.

As I explained in a recent article for City Journal (“The ADA Litigation Monster,” Spring 2017), the statute has produced—and continues to produce—many unintended consequences. In the area of employment (covered by its Title I), the ADA has spawned a large and growing caseload of “discrimination charges” at the Equal Employment Opportunity Commission. Each and every year, more than 26,000 disability complaints are filed with the EEOC, accounting for about 30 percent of its entire administrative caseload. Disability complaints are now as common as sex-discrimination claims, with over 400,000 having been filed with the EEOC since 1990—the vast majority of which the commission has determined to be meritless.

But this doesn’t deter the filing of Title I lawsuits in federal court. Most are unmeritorious, but all are expensive to defend, difficult to dispose of before trial, and governed by vague and often nonsensical definitions of what constitutes a “disability” and what “accommodation” is required.  Due to these factors, and especially because of the ADA’s one-sided award of attorneys’ fees (plaintiffs recover them if they prevail but employers do not), most Title I cases settle out of court.

Employers pay to make them go away. It is not a pretty picture. In 1997, Walter Olson wrote an outstanding book on the subject, The Excuse Factory: How Employment Law is Paralyzing the American Workplace. Here’s a policy tip: Always make the recovery of attorneys’ fees reciprocal, meaning that whoever loses foots the bill.

It is hard to believe, but the physical “accessibility” provisions of the ADA, set forth in Title III, and applicable to virtually every business and public entity in America, are even worse. Title I at least has a 15-employee threshold. Title III has none, hence by some estimates, six million privately-owned businesses—most of them small businesses—are covered. Under Title I, a EEOC charge has to be filed as a prerequisite for litigation. Not so with Title III. Title I applies to employment, and in the employment context, an ADA plaintiff has to have been an employee who requested but was denied accommodation. Under Title III, anyone can file an accessibility lawsuit. Title III plaintiffs are not required to make any prior demand or notice to a business before filing suit. Indeed, a Title III plaintiff doesn’t even have to have been a customer or patron of the business being sued.

Another truism comes to mind here, from the movie Field of Dreams: “If you build it, they will come.” In enacting Title III, Congress apparently felt that abusive litigation wouldn’t be a problem, because damages are not recoverable in accessibility lawsuits. But “costs” and “attorneys’ fees” are. Lawyers respond to monetary incentives with the alacrity of sharks smelling blood in the water. Because Title III is a “strict liability” law—if the business is noncompliant, the plaintiff wins regardless of the defendant’s intent or even knowledge—accessibility lawyers can file (or threaten to file) “cookie cutter” lawsuits against small businesses that are not in total compliance with the ADA’s voluminous regulations, called the “Technical Assistance Manual.” Imagine a building code or design standards drafted by the Internal Revenue Service. Few small businesses—especially mom and pop businesses—are in full compliance, making them sitting ducks for extortionate lawsuits by enterprising plaintiffs’ lawyers.

A small number of lawyers account for the bulk of Title III litigation, sometimes filing thousands of lawsuits apiece. They are not the most savory characters you will ever meet, falling somewhere between urban “squeegee boys” and patent trolls in the hustlers’ hierarchy. Some of the most prolific litigants have been disbarred, deported, or banned from filing further lawsuits, but as soon as one disappears, another lawsuit “mill” pops up to take his place, in Whack-A-Mole fashion. Even though the recovery from each lawsuit is only a few thousand dollars, predatory “drive-by” litigation can be lucrative if done on a volume basis. And the volume of this cottage industry has doubled in the past six years.

Title III litigation is concentrated in states—such as California, Florida, and New York—that allow recovery of monetary damages for ADA violations in addition to costs and attorneys’ fees. For example, California’s Unruh Act provides for the trebling of actual damages, with a minimum recovery of $4,000 (reduced to $1,000 in certain cases under reforms passed in 2012). As one might expect, the volume of ADA litigation is heavier in California than any other state, accounting by some estimates for 42 percent of all such lawsuits nationwide. Here’s another policy tip: Don’t make a bad law worse by incentivizing predatory litigation.

Lawsuit abuse under Title III has been widely reported in local and national media, and is universally criticized, but Congress has taken no action to reform the ADA. The “disability lobby” is too powerful. Not only that, the plaintiffs’ bar has an amazing ability to adapt to technological change. Tired of trolling strip malls for noncompliant parking lots and restrooms, lawsuit mills have targeted the digital economy. Twenty-seven years after passage of the ADA, websites and cyber-commerce are the new frontier of disability litigation, which is ironic because the ADA doesn’t even mention websites, and was enacted before they existed. Now, the disabled who use computers contend that websites fail to accommodate them by neglecting to provide adequate “assistive technology.” (I discussed this phenomenon recently in the L.A. Times).

Supposedly if a company’s “brick and mortar” operations open to the public are subject to the ADA, its website should be, too. There are a few problems with this logic. Some businesses operate only through a website and have no “brick and mortar” counterpart that could fairly be deemed a “public accommodation.” In some cases, judges have said, “Tough luck. If you do business with the public in any fashion, you are covered by the ADA.”

The overriding problem is that, unlike the U.S. Department of Justice’s detailed accessibility standards for physical establishments, there are no official standards for what makes a website sufficiently accessible. No matter—courts are entertaining lawsuits despite the lack of any formal rules for determining a violation. Even mobile applications are subject to the risk of litigation.

Web-access litigation, usually brought by visually impaired or deaf consumers, is gaining speed.  Many cases have been filed (or threatened) and settled, but apparently only one has actually gone to trial, in Miami, Florida against the supermarket chain Winn-Dixie. The company lost. The court rejected its claim that failure to provide screen-reader software so that blind customers could use its website was not a violation because the plaintiff was not denied physical access to the stores. Winn-Dixie reportedly plans to appeal.

Granted, there are informal industry guidelines for web access (really “best practices”), but they are not definitive and have not been adopted by the federal government. “Accessibility” can be very expensive—upwards of $50,000 to make a website compliant under the informal standards. The Department of Justice is not expected to issue web-access regulations until 2018.  In the meantime, millions of commercial websites face the potential for litigation without clear regulatory guidance—the worst of both worlds. Cyber commerce represents a huge segment of the U.S. economy. Exposing businesses to potentially ruinous litigation in the absence of specific rules is an affront to the rule of law.

This essay is adapted from a speech delivered on July 20, 2017 to the American Legislative Exchange Council’s Civil Justice Task Force at ALEC’s national meeting in Denver, Colorado.

We’re the Government. Trust Us.