In H.G. Wells’ story “War of the Worlds,” predatory invaders from Mars take over the earth, only to die suddenly from common infections. Americans are tempted to view China in the same light. China has challenged the United States strategically in the South China Sea and technologically through its leading position in next-generation broadband. Will the 2019-nCoV strain of coronavirus cripple the Chinese economy, or topple China’s Communist regime? In the absence of real data no scenario can be ruled out, but it would be unwise to count on an Act of God to undermine America’s biggest strategic competitor.

A disturbing sort of Schadenfreude characterizes some conservative commentary on China’s present health crisis. President Trump is a notable exception, offering encouragement to China’s efforts to contain the epidemic in a February 7th Tweet. We should be careful what we wish for; a virus potent enough to devastate China almost certainly would spread globally and cause inestimable harm to Americans as well.

Here is what we do not know about the epidemic: 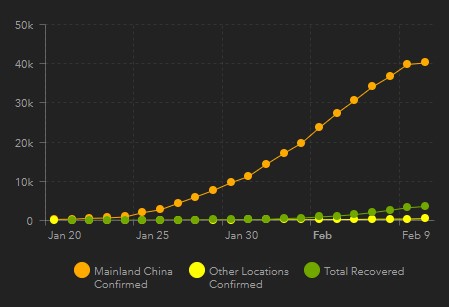 Modeling by academics in Hong Kong suggests that, as of January 25th, tens of thousands of people have already been infected and that the epidemic will peak in a few months’ time. If so, the virus is more widespread than thought, and hence will be harder to contain within China. But it will also prove less lethal, because the number of deaths should be measured against a much larger base of infections. As with flu, a lot of people could die nonetheless. In 2017-18 a bad flu season saw symptoms in 45m Americans, and 61,000 deaths.

In recent days we have seen some concerning instances of onward [coronavirus] transmission from people with no travel history to China, like the cases reported in France yesterday and the UK today. The detection of this small number of [coronavirus] cases could be the spark that becomes a bigger fire. But for now, it’s only a spark. Our objective remains containment. We call on all countries to use the window of opportunity we have to prevent a bigger fire.

There are, to be sure, limits on the extent to which any state can suppress information about a large-scale epidemic. The World Health Organization did not report the new coronavirus until January 9th, but private consulting firms monitoring news and social media knew something was afoot in late December. One was BlueDot, whose 40 employees used “natural-language processing and machine learning techniques to sift through news reports in 65 languages, along with airline data and reports of animal disease outbreaks.” The case of physician Li Wenliang who was reprimanded by police for WeChat posts about a new respiratory virus before dying from the disease February 7th has provoked outrage on Chinese social media, as well as a promise by the National Supervisory Commission, the country’s anti-corruption agency, “to investigate the local police.” The Wuhan local government belatedly adopted Dr. Li as a hero. The salient fact is that the Chinese authorities allowed popular anger to spill over into social media rather than censor it. Any interference with social media would be a sign of panic on Beijing’s part.

Despite the unknowns, it is reasonable to infer that the Beijing government has used the crisis to stage a show of force. A number of Western epidemiologists interviewed on background by my colleagues at Asia Times doubted the medical efficacy of the unprecedented quarantine, which froze more than 50 million Chinese in place. It seems likely that the quarantine of Wuhan and fifteen other Chinese cities was intended to display the power of the Chinese state, whatever its medical justification. It also undertook some high profile gestures, including the construction of two new coronavirus hospitals in Wuhan in only a week. Apparently the Beijing regime anticipated popular discontent over the epidemic and acted preemptively to squelch it.

A February 5th dispatch from Bloomberg News bore the headline, “China Sacrifices a Province to Save the World From Coronavirus.” For Wuhan, Bloomberg reported, “the quarantine restrictions coupled with an already overwhelmed city infrastructure meant that supplies of essential medical equipment including masks, protective suits and high-grade disinfectant were slow to get to Wuhan’s hospitals… Wuhan is paying the price, with the mortality rate for coronavirus patients there 3.1%, versus 0.16% for the rest of China.” The former director general of China’s Center for Disease Control and Prevention told Bloomberg, “The quarantine brought a lot of hardship to Hubei and Wuhan, but it was the right thing to do.”

Whether it was the right thing to do is questionable, according to Western medical experts. But it is China’s way of doing things. For millennia China has found it expedient to sacrifice larger numbers of individuals in the interests of the greater good, as defined by its rulers. It is impossible to separate the political gesture from the public policy objective.

Speaking on background, an adviser to China’s leadership told me that bureaucratic blunders delayed the government’s response to the crisis by at least two weeks. Local officials feared passing bad news up the chain of command. As noted, Western consulting firms knew an epidemic was underway before the Chinese government announced it. That is a blow to the credibility of the Communist Party, whose claim to power rests on the assertion that an authoritarian system can respond faster than slow-moving democracies. That puts pressure on Xi Jinping to display the full power of the Chinese state, including public punishment of officials accused of incompetent responses.

Once the full power of the Communist State has been summoned, some Chinese observers fear, it will be hard for Xi to put the genie back in the bottle. China agreed to some key reforms as part of the trade truce with the Trump Administration, including opening its financial markets to American financial institutions. The reform camp inside China’s government now worries that the crisis might derail these reforms. If that happens, China’s economic growth will slow as private entrepreneurs keep their heads down.

The coronavirus epidemic is a shock to China’s political system, but—unless the death toll spirals out of control—it probably is a shock that China’s system can absorb. But if China veers away from market reforms and relies on the brute power of the Communist apparatus, its economic momentum will weaken.

China’s sad history is dotted with natural disasters. It has had 1,828 famines at the province level between 108 B.C.E to 1911 C.E., or almost one every year. Tens of millions died in the famines of 1810-1811 and 1846-1849, weakening the Qing Dynasty just before the British began the two Opium Wars. Famine and plague during the Taiping Rebellion of 1850-1873 killed perhaps 30 million; the famines of 1907 and 1911 in East and Central China killed 25 million; and the artificial famine brought about by Mao’s blundering Great Leap Forward killed perhaps 50 million. Natural disasters brought on popular revolts and, frequently, foreign invasions. That is how China’s dynasties fell in the past. Unless the present epidemic reaches proportions at the extreme fringe of available predictions, the present Communist dynasty will survive it.

The coronavirus epidemic is a shock to China’s political system, but—unless the death toll spirals out of control—it is probably one China can absorb.

Why the Left Is Losing

America could never sustain indefinitely its tremendous commercial and military power achieved in the 1950s.

As the emergency wanes, it's well past time for legislatures to take Covid policy back from the bureaucrats.

Will advances in missile technology give China a strategic advantage?