The hit CBS show, “How I Met Your Mother,” is the story of Ted Mosby’s eight-year search for a wife. Now in its ninth and final season, Ted’s search is almost over. And as the series comes to an end, we find that the show’s major characters – Ted, Marshall, Lily, Robin, and Barney – are all drawn to marriage and children. A show that began with five, single, twenty-somethings is now set to end with three happily married couples. But married life comes only when every other alternative path to happiness is exhausted, including career, money, and casual sex. In the end, therefore, “HIMYM” is about the inescapable futility of the pursuit of happiness under the modern, progressive way of life. 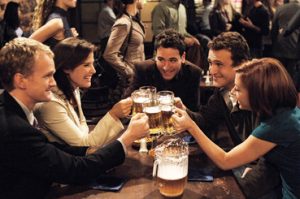 In the year 2030, Ted Mosby tells his teenage daughter and son the story of how he met their mother. The road is a long and bumpy one as Ted is constantly distracted by his career as a struggling architect and his pursuit of various sexual exploits (“God, I love being single!”). He later enjoys being a professor at Columbia University (“All that stupid crap they tell you about how fulfilling teaching is, it’s all true.”) and contributing a building of his own design to the New York City skyline (his “dream”). But he’s not happy.

What he really wants is what his best friend, Marshall Eriksen, and his wife, Lily, have. He wants to be married and have children (“a boy and a girl, Luke and Leia”). Marshall and Lily provide the example of the married life and the happiness it brings. They have a young son and a list of everyone they’ve slept with: “It’s called [our] marriage license.” But during their engagement, Lily once dumped Marshall and left for San Francisco to “find herself” and pursue her dream of becoming an artist. And even though Marshall eventually achieves his dream of working at an environmental firm, he soon resolves to apply for a judgeship instead. What both of them discover, therefore, is that family is the only source of real, lasting happiness.

While Marshall and Lily provide Ted with the example of married life and the happiness it brings, his friends Barney and Robin, on the other hand, exemplify the complete lack of happiness in the single, childless life. Barney is a former hippie turned businessman who brags that he’s slept with over 250 women. His life is “Legendary,” or so he claims, and he celebrates a holiday that he invented – “Not a Father’s Day.” Robin (who Ted once thought of as “The One”) never cared for kids until she grew to love Lily and Marshall’s son, and is secretly devastated to learn that she can never have children naturally. But even though Barney and Robin were once vehemently anti-marriage and anti-children, they are now engaged to be married to each other, and it’s suspected that they’ll want to adopt. In other words, the poster stars for the single, childless life eventually find happiness only in the possibility of marriage and kids.

Now, we know very little about Ted’s future wife. We don’t even have a name yet, but know that she plays bass in a band, is an avid reader, and doesn’t spend “all her time in a bar” like Ted and his friends. She’s also a college student studying economics. So, even though we know very little about her, what we do know tells us that she’s much more serious than the rest of the group. She’s also much younger. Right out of college, she marries Ted and has two children. The title character of the show, therefore, proves that the fastest, best route to true happiness is to get married and have children early. She already knows what took the rest of the cast years to discover.

“How I Met Your Mother” is a show about the pursuit of happiness. The lesson of the past eight years is that happiness is impossible without marriage and children. While marriage and children are obviously not without their problems, they satisfy an essential longing in the human soul that career, money, casual sex, etc. can never hope to fulfill. The series ends, therefore, only when every major character finally understands that truth.