So I’ve been deep in the bowels of the Georgia Historical Society archives the past week laying the groundwork for a new project on slavery and the law. Of course, as far as bowels go, the Georgia Historical Society is mighty fine, located in wonderful Savannah and adjacent to beautiful Forsyth Park. Repeated trips to Elizabeth’s restore the soul and the body after a long day with the super efficient archivists who continually fed me pamphlets and speeches on slavery and the Constitution, and the Bible, and science, and the progress of civilization.

Of interest to me, although by no means core to my project, is the civilizational confidence both Northern and Southern speakers evinced about their political, social, and cultural orders. It is a confidence, I think, almost absent from any state in the West today. Contrary to this observation is Pierre Manent’s argument that America is a standout from the nations of his impotent Europe because it was still willing, indeed eager, to put troops in the field in Iraq. This is evidence of a striking belief in the purpose of our statehood. Also cited by Manent on this point is our use of the death penalty. We are not those who are afraid to kill for the continued existence of law and order. You be the judge. However, our ventures in Iraq seem to me that of dissipation, of dispersing strength and capital rather than husbanding it for the proper time and maximum lethal deployment. Failures at war never go unpunished, and our bill even now continues to grow.

Southern voices, regardless of who is speaking, be it clergy, statesmen, scholars, planters, all four in one, want it all, six ways from Sunday. Their Christian civilization is in accord with science and the progress of civilization, and commercial plenty. They are gifted and have not buried their talents but put them to great use. The mission given them is to continue their work that avoids wage slavery and the mediocrity and materialism of Northern capitalism. Okay, but there is the human bondage problem. When not justifying their ownership of slaves, they point out what they believe are the hypocrisies of industrial capitalism.

Northerners, alternatively, do not typically resort to a full-throated defense of capitalism, but of human freedom as it comes to man from God. To be sure, one finds the same kind of histrionics and poly-genesis type theorizing about man, race, and progress, but the voices that, to my still learning mind, are most captivating are those that find a divine spark within human conscience. It follows that men are equal and can’t be ruled by another. However, the point of comparison is that neither civilization finds it necessary, despite its confidence in science, commerce, and progress, to remove its arguments for the goodness and continued existence of its order from the divine ground of being. Southern arguments are here difficult to understand, attempting as they do to reconcile slavery and ordered liberty, but the point remains: Being is good, we are good, our way of life is good and worthy of a defense, do you now stand in our way? Ditto for many of the Northern speeches I read, who find disunion and its threat of impotence on the continent impossible to accept. The mission of a constitutional republic must go forward.

Surprisingly, or maybe not so surprisingly, a Frenchman, Rémi Brague, a professor of philosophy at the Sorbonne, has cast light for me on these observations with his provocative essay from a few years back entitled “Are Non-Theocratic Regimes Possible?” Brague reminds us that “Western democracy—at least as we have known it—turns out itself, to be a kind of theocracy, too.” Certainly the divine law has not absent from the Western tradition, given that it is “emphatically present . . . in Athens no less than Jerusalem, in Sophocles, Plato, Cicero, and many others . . .” Divine law, which Aquinas sums as the legal content of the Old and New Covenants dropped from discussion with John Austin’s 1832 lectures on jurisprudence, according to Brague. But so too, it seems, did Aquinas’ notion of natural law. He located that law in man’s “ratio, i.e., in reason and freedom. Natural law is rational law.” It was also “a share of eternal law in rational creatures.” Natural law, per Aquinas, is a type of divine law where man finds the measure of his freedom.

So we no longer do the natural law stuff, we’re just not into that sort of thing anymore. However, we do have the conscience notion, writ large. But what is the weight of our current understanding and practice of the dignity of conscience? Conscience for most of the Western tradition meant the presence in man of the divine. Christians didn’t discover this notion, as it is found among pagan philosophers as well as Church Fathers and Scholastic theologians. 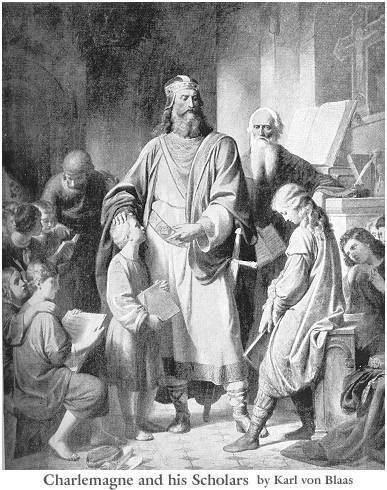 Brague also notes that our democratic notions of the rule of law and election ultimately depend on these theological accounts of law and conscience. Election itself, as Harold Berman also notes, at least the modern practice of it, originated in the cloisters. Monks elected their abbot, a practice which then extended throughout other religious orders. Brague asks: “In the midst of a feudal society characterized by hierarchy, deference, and the hereditary principle, whatever could have been the ultimate ground of this trust in the vote?” It is only understandable by the appreciation of “the principle of moral choice in man, i.e., conscience,  . . . considered to partake in a divine quality.”

But what of Vox populi, vox Dei or “one man, one vote”? The Latin formula, Brague notes, itself originated with Alcuin, the English monk in charge of education at the court of Charlemagne in the early ninth century. Of course, we’ve obviously secularized conscience. And we may not even really believe in it anymore, it being a superstitious holdover. We prefer explaining ourselves through neuroscience and/or as intelligent chimps. I think Brague is right that when we do acknowledge conscience it means “whatever the individual decides according to his or her whim.”

The real point of Brague’s piece is to scrutinize the easy claim of the “secularized status of our democracies” assumed to be above any real argument. What do we lose with this argument? What can we still defend with it? That is, if the social contract is the sole source of our governing norms, excluding whatever might claim “an extra-human origin” why do we continue going as a people? Reason can only scrutinize, it cannot offer existential justification of a people. No one, Brague says, “has a right to be begotten.” This would obviously include the Society we are born into.

Society has to decide to go on living and this “brings us to the limit of the contract: such a contract, precisely because it has no external point of reference, cannot possibly decide whether the very existence on this earth of the species homo sapiens is a good thing, or not.” Self interest alone may get you a measure of peace, but can it get you from generation to generation? This last argument of Brague, more than anything else, might best explain the refusal of Western democracies to even be willing to replace themselves.

Abolitionists, Lincolnians, Southern defenders of a displaced plantation society within modernity, are both strange, wonderful, and odious to us, but they never doubted their continued existence as a people.

American Democracy Is Not Endangered by Trump

Why is it that the English-speaking peoples historically combined a deep love of liberty with a passionate devotion to their political duties? Can it last?