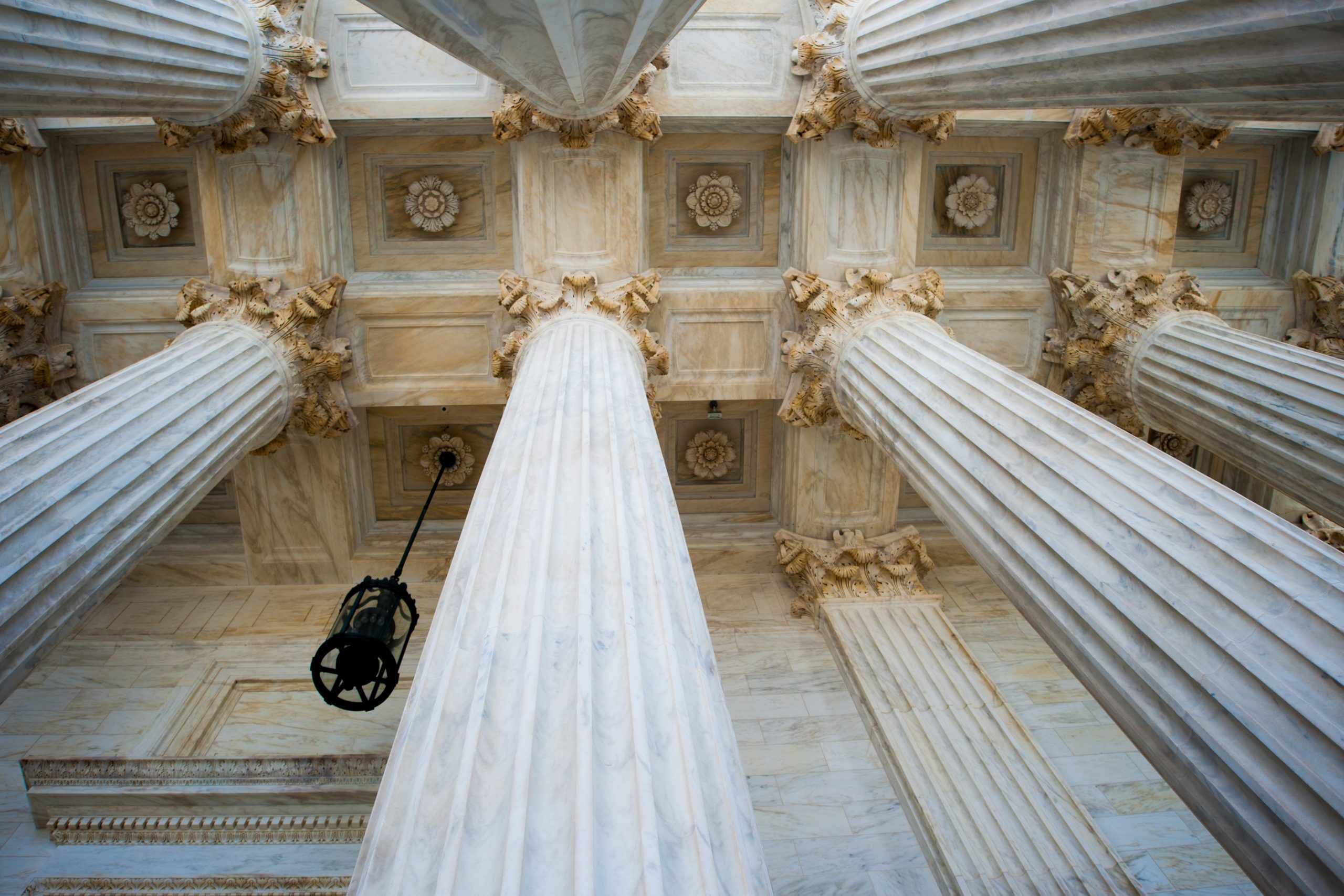 Is the U.S. Supreme Court a court? On the one hand, the answer seems obvious. It says so right in there in the name. Plus, the justices wear those funny robes. Strong evidence, I admit. On the other hand, see every Supreme Court decision involving constitutional law over the past century and a half. I could rest my case there, but I haven’t gotten to the point yet. If the Supreme Court is a court, it is a weird one, and that often creates a great deal of confusion about how the Court does or should operate.

Generally speaking, we might think that a key characteristic of a court is that it resolves disputes in accord with some pre-established set of legal rules. It is not clear that the Supreme Court actually does that. The justices have relatively little interest in resolving disputes, and they have little concern for pre-established legal rules.

Let’s unpack that a bit.

The modern Supreme Court’s job is to take “hard cases.” Hard cases, in this sense, are those in which there are no clear legal answers. And they are inevitable. There will always be some legal questions for which the answers are unclear, and some difficult legal disputes that push the boundaries of established legal understandings. Some legal theorists think that judges effectively depart from their usual role of interpreters of the law in such circumstances and simply exercise discretion. The legal philosopher Ronald Dworkin famously argued that even in those hard cases, there was a right answer that could be determined by properly investigating the content and implications of the principles embedded in the law.

What is striking about the Supreme Court is that it specializes in hard cases. This is why political scientists love the Supreme Court. Given a steady diet of hard cases, the justices display lots of behavior that looks like the exercise of policy-driven discretion. (Of course, the justices also benefit from occupying the court of last resort in the United States, which means that even apparently easy cases can be made hard by rendering the established legal rules no longer operative.)

But does the Court have to specialize in hard cases? Maybe it doesn’t. It once exercised a largely mandatory jurisdiction, hearing appeals from the lower courts in which there was a plausible claim that the lower court had made a legal error. The Court was, to a significant degree, understood to be an error-correcting institution. But that’s boring, and time-consuming. Early in the 20th century, Chief Justice William Howard Taft persuaded Congress to pass the “Judges’ Bill,” which gave the Supreme Court a largely discretionary docket. Because of the Judiciary Act of 1925, the justices now get to pick and choose which cases it wants to hear.

Given that freedom, the justices spurn the easy cases, including those wrongly decided by the lower courts. Now they prefer to spend their time on the hard cases, where there are no clear legal answers. In those cases, the justices get to create legal answers. As Princeton Politics graduate student Benjamin Johnson is showing in his research, many of the justices often use their discretion over which cases to hear to construct a docket that serves their policy agenda. Cases are chosen not because they involve legal errors that need to be corrected, but because they are useful vehicles by which the justices can make new law.

Beyond how it chooses the cases it hears, the Court also treats them in a manner that emphasizes its role as a policy-maker rather than a dispute-resolver. The British practice inherited by the early American judiciary dictated that each judge on the bench hearing a case would issue an individual opinion explaining how he reached his judgment of how the case should be resolved. This practice was known as issuing opinions in seriatim.

John Marshall, the fourth Chief Justice of the Supreme Court, resolved to end that practice in America. Instead, the justices began to issue a single collective opinion “for the Court,” often written by Marshall himself. Late in his life, Thomas Jefferson confided to Justice William Johnson, whom Jefferson had placed on the Court, his “uneasiness” with this “habitual mode of making up and delivering the opinions of the supreme court of the U.S.” Jefferson objected in part because a single opinion for the Court tended to hide the degree to which there was dissent among the justices.

If the dissenters kept their objections private, as was often the case on the Supreme Court until the early 20th century, the public would not know how much weight and credit they should give to the Court’s opinion. If a single opinion was handed down by the “Oracles of the court,” in Jefferson’s words, then the observer could not know whether the justices “were really unanimous” or whether the winning side was “prevailing by the preponderance of one voice only.” Moreover, in a republic, Jefferson thought it essential that each justice take responsibility for his own work, so that he could be held to account by the public if it were sloppy or dangerously overreaching, by impeachment if necessary.

From Jefferson’s perspective, the work of the Court was too important to allow the justices to operate “in the dark.” They needed to work in the light, and to boldly sign their names to the reasoning that guided their actions.

No doubt, Chief Justice Marshall hoped to increase the power and authority of the Court by having the justices present a united front. But as the 20th century advanced, the Court’s members  were increasingly eager to issue their own opinions. Not only did they publicize their dissents  when they thought the Court was heading in the wrong direction, but they increasingly felt the need to write concurring opinions when they thought the majority had reached the correct conclusion but for the wrong reasons. Occasionally, the delivery of such opinions can provide a bit of drama, as when Justice James McReynolds went off-script in one New Deal case to exclaim that “the Constitution is gone.”

Chief Justice John Roberts does not like this proliferation of individual opinions. Soon after joining the Court, he expressed a desire to see the justices return to the practice of issuing a single opinion for the Court. He thought, in part, that coming together to sign a single opinion would force the justices to limit their ambitions and issue rulings decided on the “narrowest possible grounds.”

It is no surprise that Roberts has not been successful in persuading his fellow justices to change their ways. The Court’s current members do not want to decide cases on the narrowest possible grounds, nor do they want the judgment in the case to largely speak for itself. They want to write an opinion, one that paints the law with sweeping strokes. Indeed, the whole point of accepting cases for the modern Court is to generate opportunities for the justices to issue these individual opinions.

James Madison, like Jefferson, complained about the Marshall Court, telling a sympathetic Virginia judge that “I have always supposed that the meaning of a law, and for a like reason, of a Constitution, so far as it depends on judicial interpretation, was to result from a course of particular decisions, and not these from a previous and abstract comment on the subject.” Madison suspected that Marshall was too inclined to seek out opportunities to wade into constitutional disputes and announce his views on them, with the legal problems of the parties appearing before the bench a mere backdrop to Marshall’s performance. Madison thought Marshall was acting like a so-called judge.

This gives a new spin to Marshall’s famous pronouncement that it is the “province and duty of the judicial department to say what the law is.” On a modest reading, the chief justice simply meant that the courts needed to resolve legal uncertainties and conflicts within the law in order to dispose of the cases that came before them. On a less modest reading—one that the modern Court has since embraced—it is the job of the Supreme Court to announce new law. The law does not truly exist until the justices say what it is. The Court does not engage in the judicial task of resolving disputes in accord with some pre-existing set of legal rules; it engages in a somewhat different task of issuing legal pronouncements that other courts will then use to resolve disputes. There are other bodies within our political system that perform that task as well.  They are called legislatures.

The Supreme Court has embraced pluralism over militant secularism.

A Course on Ronald Dworkin