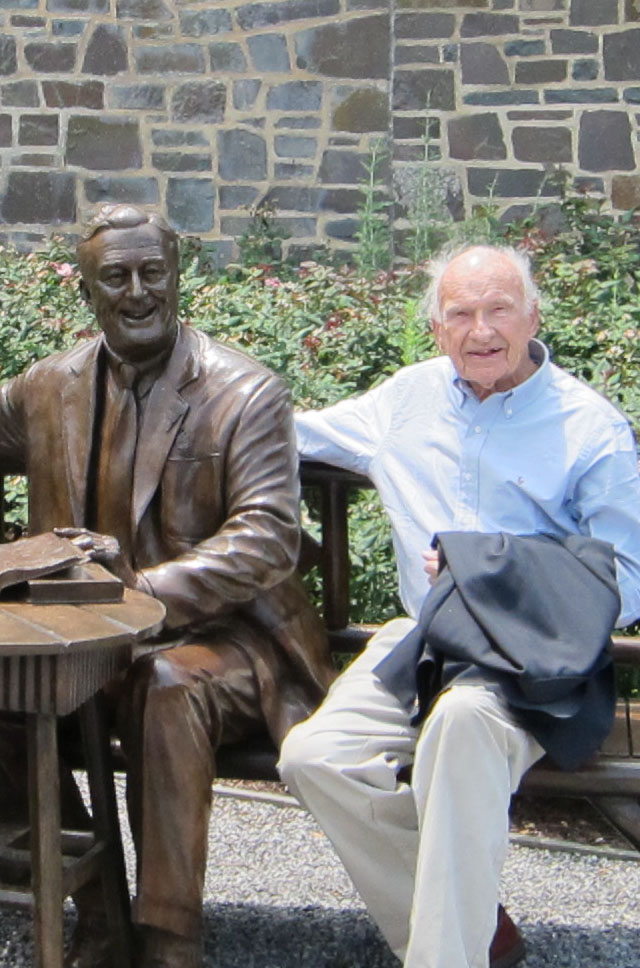 Virtually everything that James MacGregor Burns—who died on Tuesday at the age of 95 and who is rightly being honored as one of the greatest political scientists of his time—wrote about the Constitution was wonderfully provocative, incisively argued and totally wrong. He was perhaps the leading Constitutional critic of his era, a vital service, even if Burns sometimes performed it, as in his critiques of separation of powers, in demonstrable error. He was a Progressive, both a student and an advocate of what he called “transforming leadership” and a critic of institutional mechanisms that inhibited it.

Perhaps best known among students of American political thought for his critique of separation of powers in 1963’s The Deadlock of Democracy, Burns—then frustrated by the Senate’s obstruction of civil rights legislation he thought to have been publicly endorsed in the 1960 presidential election—believed he had caught James Madison in a mistake. That is hard to do, and Burns’ effort, while innovative, stumbled.

The attempt was this: If Madison, as he claimed, solved the problem of the abusive majority in Federalist 10—and this without relying on institutional blocking mechanisms—why did he need the added security of the separation of powers, which, to the extent it was unnecessary, was also gratuitously undemocratic? Fifteen years later, George W. Carey decisively answered that Madison was not trying to solve the problem of an abusive majority through the separation of powers, he was trying to solve the problem of a tyrannical government—something the Founder explicitly stated in Federalist 51 that he regarded to be a different problem.

Burns—who elsewhere argued, among other things, for a Senate based on population (as Madison had), for term limits for Supreme Court justices and against them for Presidents—stood in a line of Progressive assaults on the Constitution admirable since J. Allen Smith for their frankness. Political disputes had theretofore been sublimated into mutual praise but dueling interpretations of the founding document; the Progressives had the honesty to conduct a frontal assault.

Their consistent error, and Burns’, was a misapprehension of the requirements of majority rule, any impediment to which was to them a sign of latent if not explicit aristocracy. The Framers’ republican regime, by contrast, seasoned majorities to assure their reasonableness.

Burns, too, believed in mechanisms to give shape to otherwise unformed majority will. But rather than the steadily percolating mechanism of legislation, he believed in the revolutionary stewardship of the great leader who oriented the people toward permanent transformation: “Transforming leadership … occurs when one or more persons engage with others in such a way that leaders and followers raise one another to higher levels of motivation and morality.” He opposed this to “transactional” leadership that merely bargained away differences.

Another word for “transaction” is “governance,” and it is what both prudence and circumstance often demand. In certain hands, Great Man history—Burns seems to have resisted that term even though it is difficult to distinguish transforming leadership from it—often leaves insufficient room for prudence. Progressive history’s insistent need is precisely what its name suggests—progress—its relentless assumption being that the status quo—no matter what it may be—must always strive upward for some better state. Our Congress-centric Constitution, by contrast, gives gradual and therefore moderating shape to majority will. It is, as Carey used to say, nomocratic—focused on rules—rather than teleocratic, unfolding toward an end.

To be sure, the wrinkle—and it is more than that, perhaps a deep crease—that Burns added to a politics centered around heroic individuals was an amalgamation of the Great Man with social history: The transforming leader and the transformed follower, locked in a historical dance, impart strength to one another. For him, the leader as opposed to the tyrant is oriented toward the follower’s hopes. But even here Burns corrupts a noble if flawed concept—heroism—with the alloy of unmeasured populism.

The Philadelphia Constitution, too, seeks to blend leadership and republicanism. Its strategy, in the words of Federalist 10, is to “refine and enlarge the public views, by passing them through the medium of a chosen body of citizens, whose wisdom may best discern the true interest of their country, and whose patriotism and love of justice will be least likely to sacrifice it to temporary or partial considerations.” This use of constitutionally structured legislative government, which imbeds prudence and moderating delay at the heart of the regime, accomplishes Burns’ ends without Burns’ baggage: the transforming leader, fired by moral energies, untethered from constitutional restraints.

It is much the baggage the last two Administrations have carried, and therein lies its problem: The bare concept of leadership is neutral with respect to the nature of its use. One who accepts that transformation is an unvarnished good or, better put, an uninterrupted need necessarily empowers leaders of opposite views to transform in opposite directions, which explains why momentous change tends to be more attractive when an executive of one’s own persuasion is in power and more offensive when one is on the outs. Consistency in either advocacy or critique, by contrast, is hard to come by: Those seeking to sue President Obama for executive abuses today were silent during the Bush Administration, and those who cried foul during the 2000s have gone quiet now.

Of course, voters change their minds, and it may be the job of the transforming leader merely to facilitate transformation in the direction of momentary will. Thus the essential contrast: For the Framers, the purpose of a Constitution was to channel, structure and season majority views. For Burns, as for the distinguished line of Progressive Constitutional critics at whose end he may have stood, it was to unleash them. They were bound not to get along. But the tension between them productively illuminated the value of the regime that, correctly understood, we have.

Saved By the Bar?

Administrative Law Judges and the Constitution

Administrative law judges threaten the separation of powers, yet the alternatives available for changing the law are fraught with dangers.