My wife was in her family house in Corsica when the Tour de France passed by about 25 miles from where it had set out. First, though, came the enormous cavalcade of sponsors, revealing the real raison d’être of the whole affair (as cynics might say who think that the real meaning of everything is the least creditable that is possible). Cars and vans emblazoned with the names of consumer products passed by, from some of which samples of wares were tossed to the spectators by the side of the road as aristocrats once tossed small coins to the impoverished multitudes, thereby obtaining a reputation for feeling and generosity – handy when the next revolt broke out.

Not by coincidence, perhaps, Le Monde published that day an interview with Lance Armstrong, seven times winner of the Tour. I am not quite sure whether I should put quotation marks around the word winner because, of course, Armstrong has since had his titles taken away. It is a sign of his dialectical cunning, which one cannot help but admire slightly, that in the course of the interview he should have pointed out that the Tour is a race, and since he has been declared not the winner of it, someone else must have won it; but so far no such winners have been named. 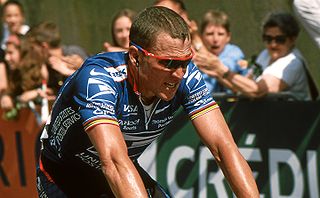 No doubt Armstrong agreed to the interview, having previously refused to talk to a journal that he had previously referred to in no very flattering terms, precisely because of its timing, just right to cast aspersions on the whole event. If he could not be a sporting hero, then no one else could be either: his mot controversial assertion during the interview being that no one could win the Tour without doping himself up on something.

There are no prizes for guessing what the reader was supposed to conclude from this assertion: that, since everyone else did what Armstrong had done, he was not as bad as he had been made to look, at least no worse than anyone else. In fact, he was almost a scapegoat, virtually a victim. Indeed, he might almost be considered a martyr, willingly sacrificing himself, by his unpopular revelations, on the altar of truth in sport. For of course, cycling is no different in respect of doping from any other sport.

There is, alas, plausibility in all this. Armstrong is certainly not the first cyclist in the history of the Tour to have taken drugs and even if his assertion that everyone does it, including the losers who aspire to win, goes beyond the truth or the evidence, he will not be the last. Certainly in most professional sports the participants seem to have physiques that suggest chemical assistance rather than training alone (though perhaps it should be remembered that such biological characteristics as height and age of puberty have changed under the influence of nutrition and social conditions). Drugging is normal, then, at least in the statistical sense; and so there are no real sporting heroes.

For me, there haven’t been any for many years, not because of the drugging, but simply because (in my own biased opinion) I have grown up and excellence in sport is not the kind of excellence that I much admire. I see the skill, the determination, and sometimes even the grace: but yet I cannot escape the thought that if something is not worth doing, it is not worth doing well: certainly not at the expense of almost everything else in life. I recognize that this is an idiosyncratic view that is not shared by most people; that I am alone in thinking that golf was invented to reconcile middle-aged men to the approaching oblivion of death; and that my own pleasures would seem as pointless to many a fan of sports as throwing the javelin, or putting the shot seems to me. We must just reconcile ourselves to the fact that, as the Germans say, every little animal has its little pleasure. The most that we can hope for is that other people’s tastes – always so needlessly bad – do not obtrude too much upon our peace and quiet (the taste for peace and quiet being among the harder and more expensive tastes to satisfy).

As it happens, I was on a train in France sitting next to an American lady as I read the interview. I asked her whether the name Lance Armstrong meant anything to her and she said that it did: he had been a hero of hers, having recovered from cancer and gone on to win several more of the grueling races. (Recovering from cancer is, of course, the nearest thing we have to sainthood in our post-religious world.) She was sadly disappointed by the revelation that he was not a good or attractive man; and though I did not share her disappointment, I sympathized with her. No one likes to have his judgment proved wrong; and fear of appearing naïve is one of the principle motives of cynicism. I was impressed that this lady was prepared to admit that she had ever been taken in by Armstrong; it required a kind of bravery to do so.

Armstrong cheated his way to a fortune, lying either implicitly or explicitly to the sporting authorities, to the general public and to his commercial sponsors. By all accounts he was a bully towards anyone within his power. None of this is pleasant or excusable, but they are the crimes and misdemeanors appropriate to an age of hypercelebrity and to a culture in which people are supposedly influenced in their purchases by the patently mercenary endorsements of people no more qualified than themselves to pronounce upon the quality of products for purchase. The use of sportsmen as human advertisements is obviously dishonest and is an appeal to human stupidity, or at least gullibility. Being part of this fatuous but extremely lucrative circus, Armstrong (an intelligent man) could have formed no very high estimate of the honesty of the upper echelons of the world or the intelligence of the general public. Sonia Cole, writing of forgers more than fifty years ago, said:

The actual technique of forgery has an irresistible fascination

for certain kinds of mind. Often the art is regarded not as a

crime against society, but as a battle of wits against the expert.

Forgery is a successful way of overcoming frustration and a

means of  expression; it proves to the author that he is a match

for any man and bolsters up any man.

Armstrong might well have argued to himself that either the authorities knew that he (and others) were doping and were complaisant in it, in which case they were corrupt, or they did not know that he (and others) were doping, in which case they were stupid or negligent to a degree that rendered them unfit to exercise any authority. On either hypothesis, he owed them no loyalty or honesty; as for the general public, if it really thought that such and such a product was worth buying because its manufacturers sponsored a sportsman or a sporting event (my wife noticed a manufacturer of charcuterie among the sponsors), then it was owed no truth.

On this philosophy, one bad turn deserves another, especially where the bad turn serves our pecuniary interests; and, much as we might deplore it, the tu quoque argument is deeply ingrained in human psychology. Which of us, accused rightly of wrongdoing, has never resorted to it as our first line of defense?

Many people will try to recover money from Armstrong on the grounds that he deceived them, albeit that they lost nothing by his deceit. Thus it is likely that the real winners of the seven Tours de France of whose title Armstrong has been stripped will prove to be the lawyers. It is the winning attorney who should have the yellow jersey.