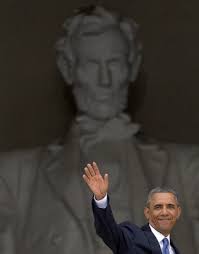 Much of President Obama’s speech commemorating the 1963 civil rights March on Washington deserves praise–or at least admiration. Speaking from the Lincoln Memorial, he began by reciting the most famous lines from the Declaration of Independence. He reminded his cynical audience that the cause of civil rights comes from the heart of our national existence. And he reinforced that principle by later quoting Lincoln, in his brief speech on the meaning of the Declaration, that “the weights should be lifted from the shoulders of all men, and that all should have an equal chance.”

By referring to Frederick Douglass early on, he calls to mind Douglass’s brilliant eulogy of Abraham Lincoln before a similarly tough crowd. Obama’s examples honoring people of all races elevated the meaning of the day. Concluding his speech with lines from the Pledge of Allegiance, he saved civil rights from the Trayvon Martin-hailing, partisan speeches of Saturday’s and the day’s rallies. (Was Hadiya Pendleton mentioned?)

In fact, at one point, he approached John McWhorter in his frankness on the real problem

And then, if we’re honest with ourselves, we’ll admit that during the course of 50 years, there were times when some of us claiming to push for change lost our way. The anguish of assassinations set off self-defeating riots. Legitimate grievances against police brutality tipped into excuse-making for criminal behavior. Racial politics could cut both ways, as the transformative message of unity and brotherhood was drowned out by the language of recrimination. And what had once been a call for equality of opportunity, the chance for all Americans to work hard and get ahead was too often framed as a mere desire for government support — as if we had no agency in our own liberation, as if poverty was an excuse for not raising your child, and the bigotry of others was reason to give up on yourself.

But Obama undercut the good he did in reaffirming his audience’s American citizenship: He stressed that the 1963 March was for not just civil rights but also for jobs.

For what does it profit a man, Dr. King would ask, to sit at an integrated lunch counter if he can’t afford the meal? This idea — that one’s liberty is linked to one’s livelihood; that the pursuit of happiness requires the dignity of work, the skills to find work, decent pay, some measure of material security — this idea was not new. Lincoln himself understood the Declaration of Independence in such terms — as a promise that in due time, “the weights should be lifted from the shoulders of all men, and that all should have an equal chance.”

The obvious response is that the Obama Administration has been a job-destroying disaster, with Obamacare a principal culprit. This is the malign Obama, who taunts the Supreme Court and local cops and juries and abuses executive power, domestic and foreign.

And once again we see the partisan trope, intended to disguise his own extremism:

Since 1963, the economy has changed.… And our politics has suffered. Entrenched interests, those who benefit from an unjust status quo, resisted any government efforts to give working families a fair deal — marshaling an army of lobbyists and opinion makers to argue that minimum wage increases or stronger labor laws or taxes on the wealthy who could afford it just to fund crumbling schools, that all these things violated sound economic principles. We’d be told that growing inequality was a price for a growing economy, a measure of this free market; that greed was good and compassion ineffective, and those without jobs or health care had only themselves to blame.

And then, there were those elected officials who found it useful to practice the old politics of division, doing their best to convince middle-class Americans of a great untruth — that government was somehow itself to blame for their growing economic insecurity; that distant bureaucrats were taking their hard-earned dollars to benefit the welfare cheat or the illegal immigrant.

Maneuvering between the extreme positions he set up, he goes into his typical closing flourish, seizing “the mantle of citizenship”—see his Second Inaugural—and marching.

We might not face the same dangers of 1963, but the fierce urgency of now remains. We may never duplicate the swelling crowds and dazzling procession of that day so long ago — no one can match King’s brilliance — but the same flame that lit the heart of all who are willing to take a first step for justice, I know that flame remains.

That tireless teacher who gets to class early and stays late and dips into her own pocket to buy supplies because she believes that every child is her charge — she’s marching.

That successful businessman who doesn’t have to but pays his workers a fair wage and then offers a shot to a man, maybe an ex-con who is down on his luck — he’s marching….

And Obama marched away from the Trayvon Martin mess he forced himself into.

“Originalism,” of a sort, enabled him to do this. Obama’s use of the Declaration is partisan, to be sure, but its words constitute one of the few civic commonalities remaining. I would venture that Obama’s relatively high approval rating is due to his deft use of patriotic symbols, including the Declaration. Do Republicans draw on it? The link between the Constitution and equality of natural rights/natural law should be the starting-point of our jurisprudence. As our sometime blogging colleague David Upham has noted, “Perhaps not coincidentally, the rejection of originalism happened roughly contemporaneously with the American academy’s nearly unanimous repudiation of natural law.”  After all, to recapitulate the thinking of Frederick Douglass, without anchoring constitutionalism in natural law, the Constitution we have may well be a pro-slavery document. And, even amended, that is not assurance for liberty.

A Return to Constitutionalism

The Challenge of Naming the Modern Originalist Movement

Why is it so hard to define intellectual movements in terms of what unites rather than divides them?