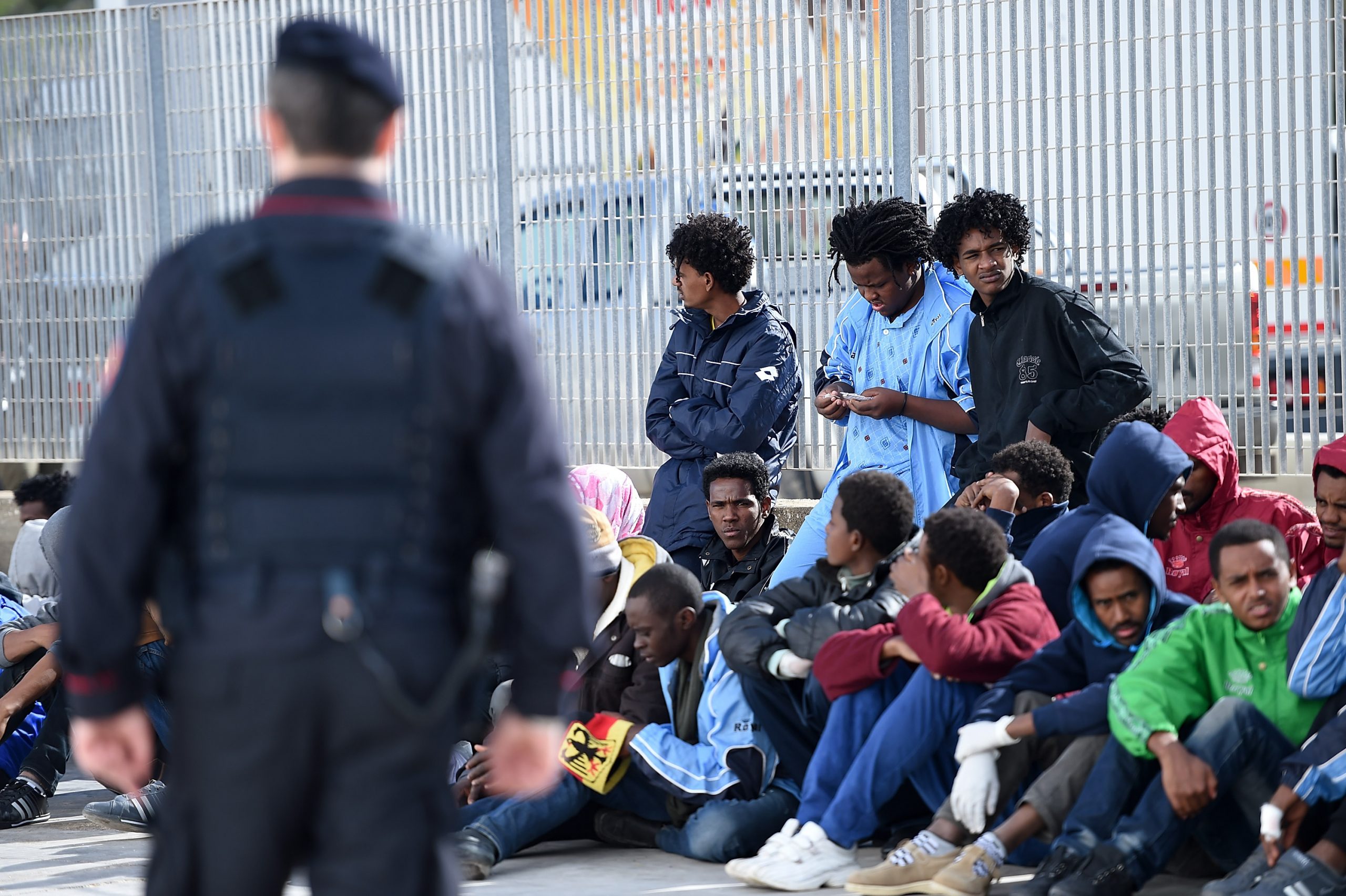 Immigrants wait to board a ship on February 18, 2015 in Lampedusa, Italy. (Photo by Tullio M. Puglia/Getty Images)

The relationship between personal experience and public policy is not at all straightforward, and of no aspect of public policy is this more true than that of illegal immigration. In Europe, the question is daily put before us by newspapers, magazines, blogs, radio, and television, with dramatic pictures of desperate illegal immigrants trying to reach our shores across the Mediterranean, many of them drowning en route. Even without such media coverage, however, the change in the ethnic and cultural origins of the inhabitants of our towns and cities is so obvious that no one could possibly miss it. Some glory in the change, some detest it; it is difficult to be neutral, or even merely objective, about it.

Although Europe is mired, for the moment, in economic stagnation (how long for is a matter of speculation), it is vastly rich, prosperous and stable compared to the countries from which the immigrants generally come. Even Greece seems a promised land to them, though mainly as a jumping-off point from which to reach a richer country yet.

On the subject of illegal immigrants, and the wider one of the change in the ethic and cultural composition of our societies, I confess that my thoughts and feelings are inconsistent and contradictory. I am myself the son of a refugee, and in my work as a doctor in a hospital in an area that came to be inhabited by, if not exactly to welcome, many refugees and illegal immigrants I came to almost always to sympathize with, and often to admire, them as individuals.

The difference between political refugees and economic migrants did not seem to me as important as it seemed to our authorities, for even the economic migrants were fleeing conditions that were unimaginably hard. The people I came to know were brave and enterprising, and had no desire to sponge on the state, but rather to work and improve their lives. Although they had no legal right to anything but emergency medical care, I ended up being primary care physician to them because they had no one else to turn to.

Perhaps it helped that I had been to most of the countries from which they came: the Congo, Iran, Somalia, and so forth. For a native Briton to speak to them who knew even a little of their country must have come as some slight relief to them in a sea of strangeness, incomprehension, hostility, or indifference. I too enjoyed talking to them. It allowed me to feel benevolent at no great cost to myself.

It does seem to be the case that we need people to come to us from impoverished lands, and this is so despite the fact that we have a substantial fund of unemployed people. Why this should be I leave to labor economists to decide; I suspect it has something to do with the rent-seeking behavior of a very large percentage of our population (including me). But let me just describe the case of my mother-in-law living in Paris, now so infirm that she needs the assistance of three people working in shifts to allow her to remain at home.

These three are women who come from Cabo Verde, Mauritius, and Haiti. Whether they were ever illegal immigrants I do not know; but they are now legal residents of France and are paid in regular fashion, taxed normally and with all the rights of those who work in the official economy.

All three of them do far more for my mother-in-law than they are paid to do, not because of any attempt on our part to exploit them, but because they are extremely good people, whose warmth, kindness, humanity and mannerliness were obvious on first acquaintance. Indeed, these qualities induce a slight feeling of shame in belonging to a culture in which these qualities should seem exceptional rather than normal. It is we, not they, who are so often crude.

It so happened that when I first met the Haitian lady I had just been to an exhibition of Haitian art whose catalogue I showed her; moreover, my wife and I had been to Haiti (in my case more than once) and so were able to talk to her of Haitian history and literature. We discovered what is too easily overlooked in immigrants from poor countries, namely that she was a refined and educated person, though one who felt no shame in her work as caregiver to an old lady. Having made our acquaintance, she immediately brought us a present of a bottle of Haitian rum which, by the way, is by far the best that I know; its cost represented two and a half hours of her labor. She delights to cook Haitian dishes for us, doing this for the pleasure that our thanks give her. She is a woman who laughs at hardship, whose generosity of spirit is obvious.

The other two caregivers have different virtues, but are just as virtuous. And without the help of these women, we should either have to put my mother-in-law in a home or look after her ourselves, disrupting—not to say dominating—our lives entirely.

Having conveyed my personal experience, I musn’t shy from the question: is one’s personal experience sufficient to fashion a proper attitude or policy towards immigration, legal or illegal? I am not so unprejudiced a person that I view with delight the disappearance of the culture in which I grew up, which is being absorbed into a kind of cultural minestrone of no particular savor. Nor do I think that to know another culture is simply a matter of patronizing a restaurant of its cuisine from time to time. It is, rather, the work of years if not of a lifetime. Consider that multiculturalism therefore condemns us to be strangers to one another; and, while all cultures have their charms, they may not all be compatible in their conceptions.

The economic effects of mass immigration into European countries are disputed. Some claim that it leads to economic growth, but this is not the answer to the real economic question, which is whether it leads to age-adjusted per capita economic growth.

Even if this question could be answered affirmatively and beyond all doubt or debate, there would still remain the question of whether, for other reasons, it would be undesirable. The fact is that most people who support mass immigration are personally less keen on taking the social consequences of it. In France, for example, someone not long ago contacted more than 40 media personalities who publicly supported immigration and asked them whether they could assist personally with lodging an immigrant. Though each was rich, none said he could do so for more than a day or two, each finding a good excuse for his inability.

The Sharing Economy versus the Centralized State

Libertarians Can Believe in Borders

One can easily imagine a place with immigration limits that would at the same time uphold relatively libertarian principles.