Frederick Gedicks, who holds the Guy Anderson Chair at Brigham Young University Law School, recently argued in the Washington Post that to permit Hobby Lobby and Conestoga Wood, the two companies challenging the contraception mandate on religious liberty grounds, to receive an exemption from its strictures would be a violation of the Establishment Clause. Gedicks argues that granting the exemption would, in effect, make employees of these companies pay the costs of their employers practicing their religion:

These cases indeed pose a grave threat to religious liberty, but not to that of the owners of these businesses. Exempting ordinary, nonreligious, profit-seeking businesses from a general law because of the religious beliefs of their owners would be extraordinary, especially when doing so would shift the costs of observing those beliefs to those of other faiths or no faith. The threat to religious liberty, then, comes from the prospect that the court might permit a for-profit business to impose the costs of its owners’ anti-contraception beliefs on employees who do not share them — by forcing employees to pay hundreds of dollars or more out of pocket each year for what should be covered under the law. 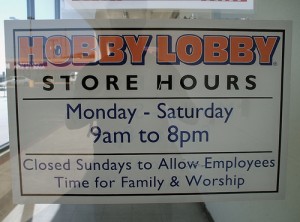 To this we might say, my, my administrative state how you have grown and given cause for your friends to twist essential rights in your service. So if a religious liberty exemption requires cost-shifting in the manner of employees having to purchase—let’s be clear for Hobby Lobby and Conestoga Wood, the objection is to emergency contraceptives like Plan B, Ella, and also IUDs, and not the pill—their own emergency contraceptives, then we have an impermissible establishment of religion. As Eugene Volokh has argued, were the exemption to be granted the employees of Hobby Lobby or Conestoga Wood would return to the status quo before the mandate came down and one that many employees of companies exempt from Obamacare for various reasons will stay in. That is, if they want emergency contraceptives, well, then, they’ll pay for them with their salaries. I know, I know, the voices of Humanitarianism cry out against such reasoning.

Wait a minute, though. Marc DeGirolami’s response to this argument, as made by Nelson Tebbe and Micah Schwartzman, notes that every religious exemption cost-shifts in some way. Isn’t that the deal? What kind of religious exemptions would be left under such reasoning? Gedicks assures us that such exemptions as parents not wanting to send their children to public schools so that they can be home-schooled or sent to private religious schools would be permissible under his reasoning. Boy, that’s a relief, I mean, for a minute there. Moreover, does RFRA remain good law, or RLUIPA under the regime Gedicks et al. want to construct?

After all, these statutes require religious exemptions when (1) a law places a substantial burden on an individual’s religious beliefs, (2) the law is not crafted in the least restrictive means available, and (3) the government cannot demonstrate a compelling state interest in favor of the law. In short, cost-shifting is baked-in, but in that process the statute contemplates the type of balancing between religious liberty and secular interests that the Gedicks gang points to, even if they’ve rigged the scales so far in the secularist direction that the analysis is over before its begun. DeGirolami notes that the reason why these arguments haven’t been made in government briefs supporting the mandate is because

RFRA incorporates certain limits to accommodation. That is, it would be a very rare RFRA (or RLUIPA) accommodation indeed which was constitutionally problematic under Thornton, because all RFRA (and RLUIPA) accommodations need to satisfy the substantial burden, compelling interest, least-restrictive-means threshold. The law at issue in Thornton, according to the Court required an accommodation “no matter what burden or inconvenience this imposes” on third parties. But the standard for RFRA accommodations is not, “you must grant the accommodation no matter what burden or inconvenience this imposes.” Accommodations must pass the government compelling interest threshold. If they do, they seem very much not to be violations of the Establishment Clause rule laid out in Thornton. In fact, many of the arguments about third party harms that T&S [Nelson Tebbe and Micah Schwartzman] make have already been briefed by mandate advocates as part of the RFRA calculus. So they haven’t been ignored. They just haven’t been analyzed under the Thornton Establishment Clause framework, because Congress already saw to that in the statutes.

The Gedicks’ argument primarily relies on one case, Estate of Thornton v. Caldor, for their claim, which involved a law that exempted employees from work on their Sabbath day. A Presbyterian sued his former employer for firing him because he refused to work on Sunday. In holding the statute in violation of the Establishment Clause, the Court noted its “unyielding weighting in favor of Sabbath observers.” The holding found that no balancing process was present in the law between the inevitable conflicting interests of the employers and religious employees. But RFRA contemplates the type of interests-weighing the Court found absent in Thornton.

While stating forthrightly that this is an argument without a huckleberry, DeGirolami, with charity, takes the gang up on its proposed argument that the mandate should be upheld on Establishment Clause grounds, apart from feeding it through RFRA. He concludes that Thornton’s context, the “unyielding weighting” the Court cited, precludes it from being decisive in the Hobby Lobby and Conestoga cases for reasons previously stated, i.e., the specific objection to the contraceptive products made by Hobby Lobby makes for a narrow burden on employees requiring only that they pony up for their goods.

Apart from DeGirolami’s impressive dismantling of the argument here, maybe there is something more fundamentally important—the need for a statement of core constitutional morality. At the heart of all this might be the claim made by Tebbe and Schwartzman to the effect:

At root, the constitutional conviction is that it is unfair and unconstitutional for the government to impose any substantial costs of a religious exemption on a focused and identifiable class of third parties.

So, finally, we get to it. I think what’s really going on, indeed, you have to work hard to ignore it, is that religious liberty is being relegated to a backwater of constitutional protections. The Establishment Clause has never been read in such stark terms as is proposed above. But that raises the basic question I want to address, that is, what’s true about the First Amendment religion clauses? They clearly contemplate that religion is a good and is favored by the constitutional regime, as amended. So why stack the deck against them or set them against one another?

Wanted: A Sound Money Congress to Discipline an Inflationary Fed

Will the Court Finally Kill the Lemon Test Ghoul?

Rather than continuing to apply the Lemon Test the Court should rely on an accurate account of the founders’ understanding of the Establishment Clause.