In The Fractured Republic, Yuval Levin writes of the deconsolidation of both social and economic life in post-WWII America. By this he means the deregulation of social life and economic life relative to earlier periods. Deregulation in both spheres moved in tandem according to Levin:

In very broad terms, the first half of the twentieth century (and the final decades of the nineteenth) can be seen as an age of growing consolidation and cohesion in American life . . . .  The second half of the twentieth century and the opening years of the twenty-first have instead been marked by growing deconsolidation and decentralization. The culture has become increasingly variegated, the economy has diversified and become more deregulated …

A connection on the theoretical level between social and economic liberalization is entirely plausible. Libertarian political principles have long championed a unified justification for liberalization in both spheres. Yet libertarians have not been in control of government during this period.

As legal and policy matters, the empirical evidence does not show that economic liberalization over the last fifty years parallels the dramatic social liberalization during that period. Indeed, aside from discrete instances of deregulation in airlines, finance, and a few other industries, evidence suggests little overall change in the amount of economic regulation during this period—at least if you ignore the very recent deregulatory inclinations of the Trump Administration.

Consider first a variety of changes in the legal domain. Economic substantive due process, the doctrine judges once used to justify heighted standards of scrutiny when reviewing economic policies, was gasping for breath by the end of the 1930s. The last nails were pounded in its coffin, at least among Federal courts, by the 1950s. Scarcely a decade later, however, the courts discovered a privacy right in the Fourteenth Amendment. While initially skittish to admit the rebirth of the doctrine as applied to social legislation, judges soon admitted that’s what they were applying. Yet while reborn in application to social legislation, judges did not renovate the doctrine in application to economic legislation.

The trend over the last fifty years is clear in social life, both legally and culturally. Judicial decisions struck down laws limiting or prohibiting birth control (Griswold), abortion (Roe), homosexual sex (Lawrence) and homosexual marriage (Obergefell), and narrowing the definition of legally-proscribable obscenity (Roth, although cf., Miller). (The latter of course evolved on First Amendment grounds.)

Policy and cultural deregulation of social behavior evolved in parallel fashion during the same time period. No-fault divorce and its increased social acceptance, decriminalization of and increased social acceptance of sex outside of (heterosexual) marriage, of birth control and abortion, and of obscenity and pornography. Similar liberalization for marijuana use more recently, etc.

The data regarding behavior follow the legal, policy, and cultural liberalization: Increased use of birth control relative to the 1950s, increased sex outside of marriage, increased divorce, and so on.

The evidence indicates significant liberalization in the social realm over the last half century. In contrast, outside of a handful of discrete policy domains (airlines, telephones, finance, etc.) the data do not show similarly broad deregulation of economic behavior during the same time period.

To be sure, it’s not easy to measure regulations or regulatory burdens. A single broadly-written regulation can stymie more productive economic activity than hundreds of minor, easily-satisfied regulations. Scholars need to rely on proxies for regulatory activity. Different proxies can generate dramatically different descriptions. Susan E. Dudley, director of the George Washington University Regulatory Studies Center, and Melinda Warren, Director of the Weidenbaum Center Forum at Washington University in St. Louis report on one set of seemingly reasonable proxies. They report data on budgetary costs of Federal regulation and staffing in Federal regulatory agencies from Eisenhower through Obama’s administrations. 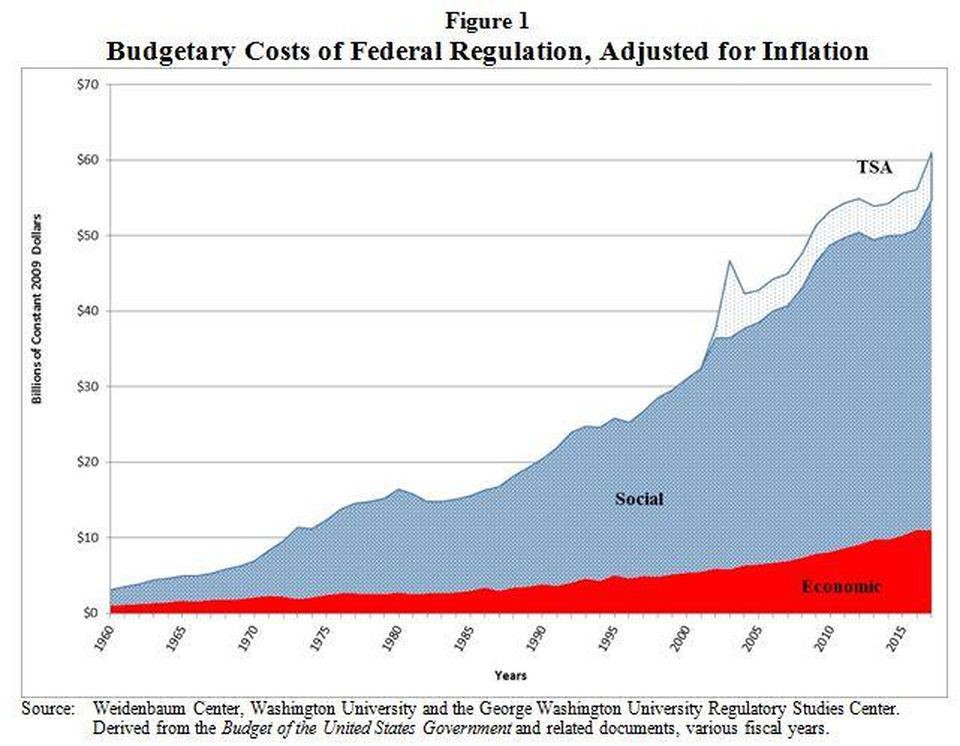 Important to note when reading these figures, Dudley and Warren use the term “social” regulation differently than I do above. For them, social regulation relates to the environment and safety and health. Economic regulation refers to price and quality controls, and regulations of market entry and exit. Both relate to economic behavior rather than to personal behavior. So we can add both their measures together to get some leverage on changes in overall economic regulation during the post-war period. 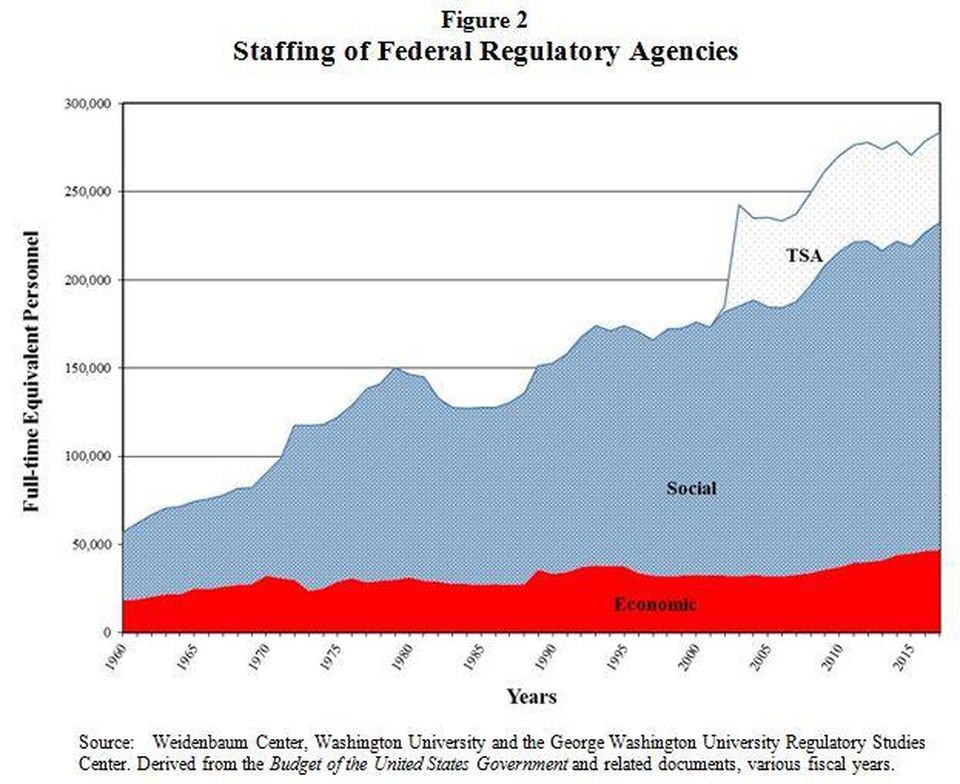 People frequently assume social and economic liberalization goes hand in hand, but the links aren't as tight as we often assume.

What would the potential overturning of Roe portend for other substantive due process cases?