Truth is universal but error is international. Living as I do between Britain and France, I am often surprised to see the same mistakes being made on both sides of the Channel with the same results, without any awareness on the part of either country of the other’s experience; the same bad arguments are made, the same false conclusions drawn.

I was on my way a few days ago to France via the Eurostar, the train that goes from the center of London to the center of Paris via the Channel Tunnel, and bought Le Figaro, the French newspaper of conservative posture, to read on the way. Its lead story was about the plans of the French Minister of Justice, Christiane Taubira, to suppress short prison sentences in favor of such penalties as probation, community service and the wearing of electronic bracelets, to release substantial numbers of prisoners before their prison sentences were completed, to give future prisoners the automatic right of release after serving two thirds of their prison sentences, and to remove certain crimes (unspecified) from the penal code. My heart sank; we’ve tried all that in Britain, with results that only an intellectual with years of training to prevent him from being able to see what is in front of his nose would or could find surprising.

Not only does the French government take no notice of the British experience, it takes no notice of the French either (just as the British government takes notice neither of the French nor even of British experience). For example, in Britain studies have repeatedly shown that the monitoring of criminals sentenced to wear electronic bracelets is so lax as to be perfectly useless from the point of view of crime prevention and that no attempts to improve it have ever proved effective. And a recent study in France, whose results are quoted in Le Figaro, showed that of more than 7000 criminals with electronic bracelets ordered by the court, fewer than 1 per cent could be localized at any one time. And yet the French government, as the British, proposes to extend their use rather than imprison criminals. I shall later tentatively propose an explanation for this initially puzzling fact. 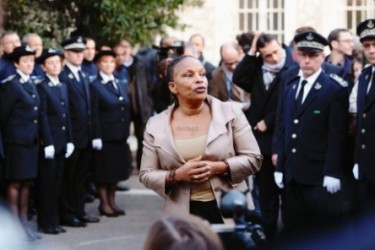 The arguments advanced by Madame Taubira and a close adviser of hers were immediately familiar to me, in all their sophistry and superficiality. They were and are precisely the arguments against which I have argued (in vain) in Britain.

First a tiny bit of context. Burglary in France has risen between 20 and 25 per cent in the last two years, and though it has yet to reach the dizzy heights of British criminal endeavor it may yet reach them. This is therefore not the moment to experiment with leniency.

The minister’s arguments, or perhaps I should say her assertions, are as follows (and I quote):

Dissuasion by prison does not work. It is known with certainty that community sentences (i.e., those not served in prison) are less conducive to recidivism than prison sentences. Severity of punishment does not reduce recidivism.

With regard to the latter statement, it is almost certainly false. The rate of recidivism actually declines with length of prison sentence. Again this could surprise only those with many years of a certain kind of education. A caveat is nevertheless in order: it is difficult to ensure that such statistical comparisons are valid.

With regard to the former statement, it is not known with certainty that prison sentences are more conducive to recidivism than community sentences. In fact, it is rather difficult to decide the question because like has to be compared with like. A comparison of the raw rate of recidivism after various kinds of punishment is not valid. Those who are sentenced to prison have either committed more serious crimes in the first place, or have already been through the community sentence mill and failed to reform. It would be necessary to compare those sentenced randomly to either imprisonment or community punishments, and who had the same criminal record and other relevant characteristics at the time of sentencing, to decide it. There would be serious ethical objections to experiments carried out along these lines; the only experiment of this type of which I am aware, in which people who were convicted for the first time of relatively minor offenses were randomly allocated to punishment by imprisonment or probation, indicated the advantage (as far as the rate of recidivism was concerned) of imprisonment. I personally do not find this in the least surprising.

But in any case the rate of recidivism is usually quite the wrong measure. The law-abiding public is interested not in the rate of recidivism, but in the numbers of crimes committed within a given length of his sentence by the criminal. It is customary (and indeed necessary for obvious reasons) to measure the recidivism rate of former prisoners after their release; but the recidivism rate of prisoners sentenced to community punishments is measured from the time of sentence. To compare the two is therefore inherently bogus.

In fact the comparison is even worse in reality, because the recidivism rate is worked out in binary fashion: either the sentenced criminal is re-convicted or he is not. But those reconvicted may be, and often are, reconvicted more than once, and for multiple crimes; but as far as the rate of recidivism is concerned 100 convictions counts as one. When one adds to this the fact that the reconviction rate is very much smaller than the re-offending rate, because the perpetrators of only a minority of crimes are ever apprehended, it is likely that the re-offending rate is many times the recidivism rate as published. Indeed, I know this is so from conversations with hundreds of convicted criminals who all admitted in medical confidence to numerous crimes for which they were never caught. A year in prison thus prevents criminals from committing many crimes; but, more optimistically, it seems from British figures of the age at which criminals are received into prison that criminality ceases spontaneously (or at least detection of criminality ceases) by the age of 39.

When one puts all the above together, it forms an argument for much longer prison sentences than are at present given in Britain and France alike. Of course, justice requires that there should be a proportionality in sentencing, that mitigating circumstances be taken into account, that severity should not be self-defeatingly draconian or involve outright cruelty, and so forth. But there is, to put it mildly, plenty of room in the British and French systems for more severity before they become draconian.

Christiane Taubira is a member of a socialist government, and socialists (especially when they are of the rent-seeking middle class variety) are ideologically opposed to the suppression of crime, supposedly out of sympathy for the criminal who usually emerges from an unfavorable social background. They see the criminal as the victim, of not quite of his own actions, at least of his own circumstances.

This disregards the fact that not all people in the same circumstances are criminal; but even more importantly that the victims of criminals are overwhelmingly not its richest members in society but the poorest. And since the class of perpetrators is much smaller than the class of victims, many criminals victimizing many people, it follows that willful failure to incapacitate criminals (by, for example, use of electronic bracelets known in advance not to work) is in effect willfully to create victims, principally among the poor.

In the current situation in Britain and France there is another imperative at work other than the ideological drive towards lenience: namely budgetary. The French government is committed, at least in its declarations, to cutting its deficit to 3 per cent of the GDP. It is therefore in search of cheaper forms of punishment.

This in itself is quite revealing: for it reveals that the government regards keeping law and order as only one of its tasks among many others, and not even, perhaps, the most important. It is certainly not the main reason for its existence. The maintenance of law and order so that citizens may go about their business is therefore not so much a cardinal task as a secondary task, equivalent perhaps to legislating the length of holidays due to workers or the national curriculum in schools, but certainly no more important than they. If cuts in expenditure there must be, then, spending on law and order must share in them.

Given the identity of the victims of crime, however, leniency of the type advocated by the French minister is the means by which the costs of crime remain exactly where they arise: namely among the relatively poor. It is the taxpayer who much bear the costs of the proper suppression of the crime from which they are the least likely to suffer. Thus ideology and political interest act in synergy, because it is the middle class, particularly the intellectual wing of the middle class, who make the most noise; and thus the self-proclaimed friends of the poor turn into their most dangerous and vindictive enemies.

A Country for Compromising Men

The Guilty and the Oppressed

Diversity, Public Safety, and the Criminal Law: A London Tale