Never having read a textbook of economics in my life, I am at the mercy of newspapers for my knowledge of the dismal science. And by means of the intellectual equivalent of the Chinese water torture, I have come to the conclusion over many years that fiat money brings with it enormous psychological problems, not to say moral corruption. My conclusions are unoriginal, of course; I could have reached them in a few hours if only I had read a few texts. No doubt re-inventing the wheel is wasteful of time and effort, but it brings with it a certain pleasure not to be had from merely reading what others have invented before. 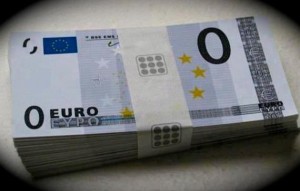 Moreover, while I can quite see the evils of fiat money, I am less good at imagining the harms of abandoning it, an important deficiency because life is usually the choice between different imperfections rather than between perfection and catastrophe. With some people it is otherwise: one could even propose a political typology composed of a two-dimensional grid, with the propensity vividly to perceive present good or evil along one axis, and that to perceive future good and evil along the other. Thus Pollyannas would vividly perceive both present and future goods; conservatives present goods but future evils; revolutionaries present evils but future goods; and nihilists both present and future evils. Temperamentally, I veer between conservatism and nihilism; but on the matter of fiat money, I am inclined to revolutionism.

Recently, for example, I read an article in the Financial Times which reported that the European Court of Justice had supported Spaniards with mortgaged homes in their conflict with the Spanish banks and government on the matter of repossessions. In 2007, a man called Mohamed Aziz took out a mortgage of Euros 138,000 (about $180,000) with the Catalunyacaixa, a lender that was later nationalized because it had got into what we have come to think are the usual difficulties. Mr Aziz was evicted from his home by the bank which repossessed it; and Mr Aziz went to the European Court arguing that he should not have been evicted because the terms of the original mortgage were ‘unfair,’ namely that the mortgager could be evicted after defaulting on only one month’s repayment, or could be subjected to an 18.75 per cent rate of interest on defaulted payments. Spanish law does not currently provide any protection against either eviction or such interest rates, and the European Court found for Mr Aziz, judging that Spanish law provided ‘incomplete and insufficient’ protection for mortgagers, especially where the property mortgaged was a family home.

The ruling has been greeted as a generous or humane one, but it is generous and humane only where there is fiat money. Otherwise, it would be extremely derogatory of ordinary adult human beings, treating them, in effect, as incompetent or mentally deficient minors.

Before I go further, let me just point out the strangeness of the term ‘incomplete protection.’ If you criticize the law on mortgagee repossessions on the grounds that it offers ‘incomplete protection’ to mortgagers, then in effect you are saying that the protection offered by the law ought to be complete. And the only way of making it complete is by depriving mortgagers of any responsibility whatsoever of repaying what they have borrowed, which is of course to undermine, not to say abrogate completely, property rights. Why, if ‘complete protection’ were offered to a mortgager, anyone would agree to be a mortgager is a profound mystery; and repayment by mortgagers would come to seem like an act of Quixotic folly. The judges, then, could not possibly have meant what they are reported by the Financial Times to have said; and if they did say it, they should all be summarily dismissed and indeed made to repay all their past salaries; for if judges are not going to use language with the precision both possible and appropriate, their corrupting influence will be of enormous proportions.

But let it pass. Let us examine, rather, the notion that the Catalunyacaixa’s terms were ‘unfair.’ Why were they unfair? Did they force Mr Aziz to sign the contract? Did they fail to reveal to him the terms of the contract? Mr Aziz was obliged neither to buy a house nor to mortgage it with Catalunyacaixa, and this is so even if no other lender would offer him better terms. Perhaps it will be alleged that Mr Aziz was incapable of understanding the terms under which he borrowed, perhaps because he was of deficient intelligence; but this is unlikely, given that he brought a case in the European Court. If he could understand enough to bring such a case, he could have sufficiently understood the original contract. In short, he made an unlucky or foolish choice and now wants to be protected from the consequences of it. (I will not consider the prudential aspects of the Catalunyacaixa’s repossession: whether, in fact, owning a lot of repossessed but untenanted houses is a good economic decision for it.)

The reason is, of course, that the Catalunyacaixa has itself been bailed out by the government: that is to say, the taxpayers, of whom Mr Aziz is presumably one. So while he is expected to pay for the bad decisions of others, he has hitherto been expected to assume the consequences of his own bad decisions. And this is patently unfair and unjust. If the Catalunyacaixa can be bailed out because failing to bail it out would have terrible consequences, why should Mr Aziz not be bailed out because failure to bail him out would have terrible consequences?

No chain of reasoning ever comes to an end, and so we may ask ourselves why the Catalunyacaixa needed bailing out? It needed bailing out because of its habit of conjuring money out of nothing, which is possible only under a fiat money regime.

In doing so (in concert with the whole financial system), it undermined Mr Aziz’s sense of financial probity, along with that of practically everyone else in the western world. Mr Aziz doesn’t really think of himself as dishonest, because he thinks everyone else is dishonest. And where everyone is dishonest, no one is. When, therefore, he runs to the European Court for protection, he does not see himself as infantilized thereby, as a man incapable of taking, or unqualified to take, his own decisions and stand by the consequences, as all men of honor do; he sees himself as a man protecting what he thinks of as his ‘rights.’ He runs to the court as a sneak in school informs on another child to the teacher.

For the true moral of the story we must turn to Hilaire Belloc, whose Cautionary Tales for Children contains the story of “Jim, Who ran away from his Nurse and was eaten by a Lion” contains the most profound lesson of political economy in all poetry. Jim, you remember, was a spoiled little boy who was taken by his Nurse to the zoo under strict instructions not to run away. He disobeyed and was promptly seized and eaten by a lion.

When Nurse informed his Parents, they

Were more concerned than I can say: –

His Mother, as she dried her eyes,

Said, ‘Well – it gives me no surprise,

He would not do as he was told!’

His Father, who was self-controlled,

Bade all the children round attend

And always keep a-hold of Nurse

For fear of finding something worse.

A Republic Worthy of Ronald Dworkin

Bitcoin's market power will grow as it is traded in futures markets.

Litigating on Behalf of Humanity

The scale of the ECJ's judicial activism makes the court the ruler of Europe.

Fiat Money and the Promise of Cryptocurrency

Since the creation of Federal Reserve, the value of the dollar has fallen by more than 90 percent, and that is not a surprise.