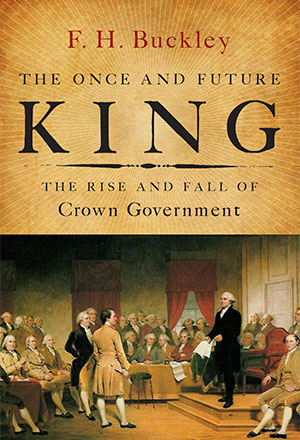 Are there any limits to the president’s discretion not to enforce a law? Conservative scholars think so. I say they’re wrong, and that we are witnessing the rise of what I call crown government in The Once and Future King. Where conservatives see a constitutional crisis, I see the inevitable working out of the pathological logic of presidential government.

Under his legislative powers, a president may effectively make laws by decree. That’s rather like the royal prerogative to which the Framers objected, with the difference that presidents are largely immunized from accountability, unlike modern prime ministers.

Presidents can also unmake laws by vetoing them or, more controversially, by refusing to enforce them. They have always had the power to veto a bill, subject to a two-thirds override by both houses of Congress. In recent years, however, they have enjoyed an expanded, non-reviewable veto power: without vetoing a bill and risking a Congressional override, they might simply decide not to enforce it.

On average, few presidential vetoes are overridden by Congress, but it does happen. Congress successfully overcame a third of George W. Bush’s vetoes (4 out of 12), and Andrew Johnson and Franklin Pierce had the dubious distinction of having more than half of their vetoes undone in this way. A president will thus be tempted to avoid the embarrassment of an override through the simple expedient of declining to enforce laws with which he disagrees, and this can be seen as a non-reviewable veto power. The practice came to a head over the last ten years with “signing statements” in which a president, without vetoing a bill, states that he does not consider himself bound by it.

Signing statements became controversial when issued by George W. Bush. Other presidents had issued them before him, and Obama did so after him. In principle, a president’s refusal to enforce an unconstitutional act is not a shocking exercise of executive power. Were Congress to pass a law abridging the right to practice one’s religion, for example, no one would expect the president to enforce it while waiting for the Supreme Court to strike it down. What made Bush’s signing statements controversial was that the laws he challenged included bans on torture and restrictions on other counterterrorism measures. Bush had asserted broad powers to conduct war as he saw fit, powers which the Supreme Court subsequently curtailed.

The Obama administration has declined to enforce laws that were thought constitutionally valid when enacted in the past but which the administration now thinks constitutionally suspect. The 1996 Defense of Marriage Act (DOMA), which defined “marriage” and “spouse” for purposes of provisions of federal law, was passed by large majorities in both house of Congress and signed into law by Clinton. In 2011, however, Obama’s Department of Justice announced that it regarded DOMA to be unconstitutional and would no longer defend it in court. The Supreme Court backed him up—but then he didn’t need their cover.

Without asserting a constitutional basis for doing so, the administration has also refused to enforce certain laws as a matter of prosecutorial discretion. Congress refused to pass Obama’s Dream Act, which would have given conditional permanent residency to some “illegal” immigrants, and so he issued an executive order that they not be deported. The new program provides a formalized Citizenship and Immigration Services procedure, called the Deferred Action for Childhood Arrivals, which would allow an estimated 1.7 million young undocumented immigrants to live and work in the United States. Obama had done more than decline to enforce the old law: by executive fiat he had replaced it with a new law. One of the Dream Act sponsors enthused that “this is the single largest opportunity we’ve had since [the amnesty program of] 1986 to bring people out of the shadows and into documented status.” The executive obviously possesses a degree of discretion in the manner in which it enforces the law, but if this permits a president to disregard broadly written laws in the face of Congressional opposition, and replace them with new laws of his own making, one might reasonably ask whether any limits can be set to his expanded veto powers.

I think I know the answer.

There is, of course, the theoretical possibility that someone might somehow persuade a court that he has standing to object to the non-enforcement power. I think that unlikely, and it is more unlikely still that the Supreme Court would want to wade into what they would regard as a political question, a turf war between a president and a complacent Congress.

That leaves the voters. But then I haven’t noticed any great expressions of republican sentiment from them of late. There is a natural inclination to kingly government, observed Benjamin Franklin in 1787, and wasn’t he prescient?

Grading on a “Change Agent” Curve

The idea that leaders should be willing to curb their appetites for greatness when circumstances do not require it comes from Abraham Lincoln.

No People? No Constitution!

Preserving good government depends upon a people’s ability to demonstrate the character appropriate to the task—and ours is in question.

Juries Judge the Law As Well

No doubt that it is the duty of judges to say what they believe the law is, but that does not mean they are the only ones - juries have their role to play.