There is a certain kind of person, usually intellectual and fundamentally well-meaning, who believes that he is courageous when he attacks what no one will defend, or when he becomes more-strenuous-than-thou in proposing the means by which to suppress an acknowledge evil.

The Church of England, which was once known as the Tory Party at prayer, has changed its political and social allegiance in the last few decades: it has become instead the social worker at prayer, with an ever-decreasing element of prayer into the bargain. And the social reforms it promotes, generally after a decent delay, are those now deemed uncontroversial by the metropolitan liberal elites. It succeeds thereby in alienating the conservatives while gaining no adherents among the liberals. It is in the process of a long-drawn out suicide, like the person with cirrhosis who continues to drink.

It was a relief, then, when the deeply embarrassing last incumbent of the archbishopric of Canterbury stepped down. He looked more like a Druid than an Anglican, and one would not have been at all surprised to see him in ecstasy at Stonehenge during the summer solstice, dressed in a white robe. His most famous, or infamous, pronouncement, in so far as head or tail could be made of anything he said (his incomprehensibility gave him a reputation for intellect among the gullible) was the inevitability of the institution of sharia law in Great Britain. 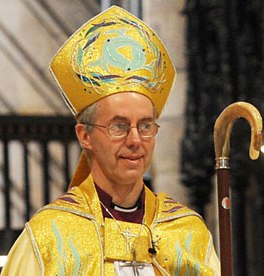 The new archbishop, the Most Reverend Justin Welby, was by contrast a man with a firm grasp, if not of reality tout court (for which of us can claim that?), at least of important aspects of reality: for before his ecclesiastical career he had been a successful and highly-paid oil trader. Evidently he came to the conclusion that getting and spending ought not to be the main focus of a man’s life, and he went into the Church; and although by no means averse myself to money, I think this speaks well of him.

Courageous as he has been in his life, he recently chose as a public target what very few people would defend: loan sharks who take advantage of people who have difficulties making ends meet at the end of the month, and who lend them money at exorbitant rates of interest.

No doubt there are some who will defend loan-sharking on the grounds that the contracts are freely entered-into on both sides, the lender and the borrower, that loan sharks must take into account the high likelihood of default, and that the borrowers would be even worse off if the sharks did not exist. These arguments notwithstanding, I doubt that anyone would be pleased if, on being asked, his child said that he wanted to be a loan shark when he grew up. Loan-sharking may not be illegal, but one would hardly call it the work of a good man either.

Thus the Archbishop chose an easy target: for who will speak up for the poor loan-shark? Unfortunately for the Archbishop, it was soon discovered by our intrusive press out that one of the largest investors in one of the largest loan-sharking companies, which went by the less than elegant name of Wonga, was none other than – yes, you may have guessed it already, the Church of England.

To his great credit, if such a word may be used in this context, the Archbishop did not deny the facts or dodge the issue; he ordered disinvestment from that hideously-named company. And – again to his great credit – the Archbishop did not call on the government to forbid loan-sharking. Instead, he proposed that the Church should open the doors of its 16,000 premises to credit unions, the means by which poor people can raise, lend and borrow money for themselves in a not-for-profit way. The Church, he said, would compete Wonga, and other loan sharks, out of business.

Good for the church, say I: if it cannot attract people by means of what Gibbon called the evident truth of the doctrine itself, why not by cheap credit? That is better than some other means of conversion that I could name; and I am not one of those angry unbelievers who believe that religion serves no good purpose. And there are few religions more benign, at least in its modern incarnation, than Anglicanism (I read recently that 90 per cent of its communicants engage on voluntary service).

In his second choice of target, however, the new Archbishop seemed to me less happy. All too aware, I feel sure, of the scandal in the Catholic Church about sexual abuse, he decided that prevention was better than cure: he wanted no such scandal in the Anglican Church. Actually, it is not true that prevention is always better than cure; but the Archbishop, acceding to the cliché, decreed that henceforward all church wardens, bell ringers, organists, flower-arrangers and the like should undergo a check by the Criminal Records Bureau (the organization that keeps all British criminal records), failing agreement to which they will not be permitted any longer to perform their voluntary duties.

It is timely, then, to ask the really important question: did the Archbishop himself have a CRB check before he was elevated to Canterbury, and if not, why not?

After all there is no reason to suppose that archbishops are less prone to paedophilic tendencies than flower-arrangers, indeed rather the opposite, in so far as flower-arrangers tend to be women and archbishops, even nowadays, tend to be men. And let us not forget that the Archbishop is a former oil trader, and therefore suspect ex officio as it were.

A CRB check is surely not enough; for, as the old medical saw has it regarding the diagnosis of hidden diseases, absence of evidence is not evidence of absence. Just because a man has no record of guilt does not mean that he is innocent; and in any case, it is never too late to start a criminal career. Sometimes, indeed, sexual disinhibition is an early symptom of frontal lobe dementia, and archbishops tend to be old. As an insurance against future misdemeanors on his part, therefore, I think the Archbishop’s DNA ought also to be taken, to help the police with their inquiries if any should become necessary. What objection could the Archbishop have, after all, if he is innocent? As Jesus would have put it today if he were alive, ‘Let him who is without sin give the first DNA.’ And Mrs Mary Baker Eddy, if she were founding a church in our time, would no doubt call it The First Church of Christ, Forensic Scientist.

It is not enough, however, that the hierarchy of the church should be thus checked as well as church volunteers. For even if the concentration of paedophiles and other criminal types among them is higher than in the general population as a whole (though no one knows this is actually so), statistically speaking most paedophiles in the church, even with today’s small congregations, must be among the congregants.

Therefore I suggest in all modesty that no one be allowed to attend a Church of England service without a CRB certificate; and by analogy with the situation prevailing with National Health Service doctors, who must supply a different CRB certificate for each employment agency with which they register (costing $60 a throw), I also suggest that the CRB certificates for would-be congregants be valid only for one specific church, so that they need one for St Andrew’s, one for St Dunstan’s, and so forth.

Of course, it has to be admitted that mistakes will be made. The Archbishop is comparatively fortunate, for according to the telephone directory there are only eight Justin Welbys living in Britain, at least who have fixed-line telephones, thus reducing the chances that the CRB will get the wrong one. But as for a poor sexton called John Smith, or a flower-arranger called Margaret Davies, the chances of CRB error are probably considerably greater than the chances of their being criminals in the first place. This, of course, is another reason for routine DNA tests of all clergy, volunteers and congregants. With such tests, identification is almost fool-proof except for identical twins (who ought therefore be excluded from public services or any function whatsoever within the church).

I have also noticed a sad lack of CCTV cameras in churches (as against, for example, notices warning people of the danger of falling tombstones in churchyards, and in one case of the presence of adders). No one could possibly object to CCTV cameras in church, and especially in Sunday schools, because practically all the rest of everyone’s life in public in Britain is recorded by such cameras anyway. As the Archbishop so charitably implies, only the guilty have something to fear.

It is a relief to witness the moral revival of the Church of England, tackling head-on at last one of the burning problems and threats of our times, namely paedophilia among tea-ladies and bell-ringers, thus killing two birds with one stone by ensuring continued employment for the poor bureaucrats of the CRB. Blessed are the poor in spirit, for they shall have CRB checks.

Robert Nisbet on Libertarians and Conservatives

Ornery Lion of the Law