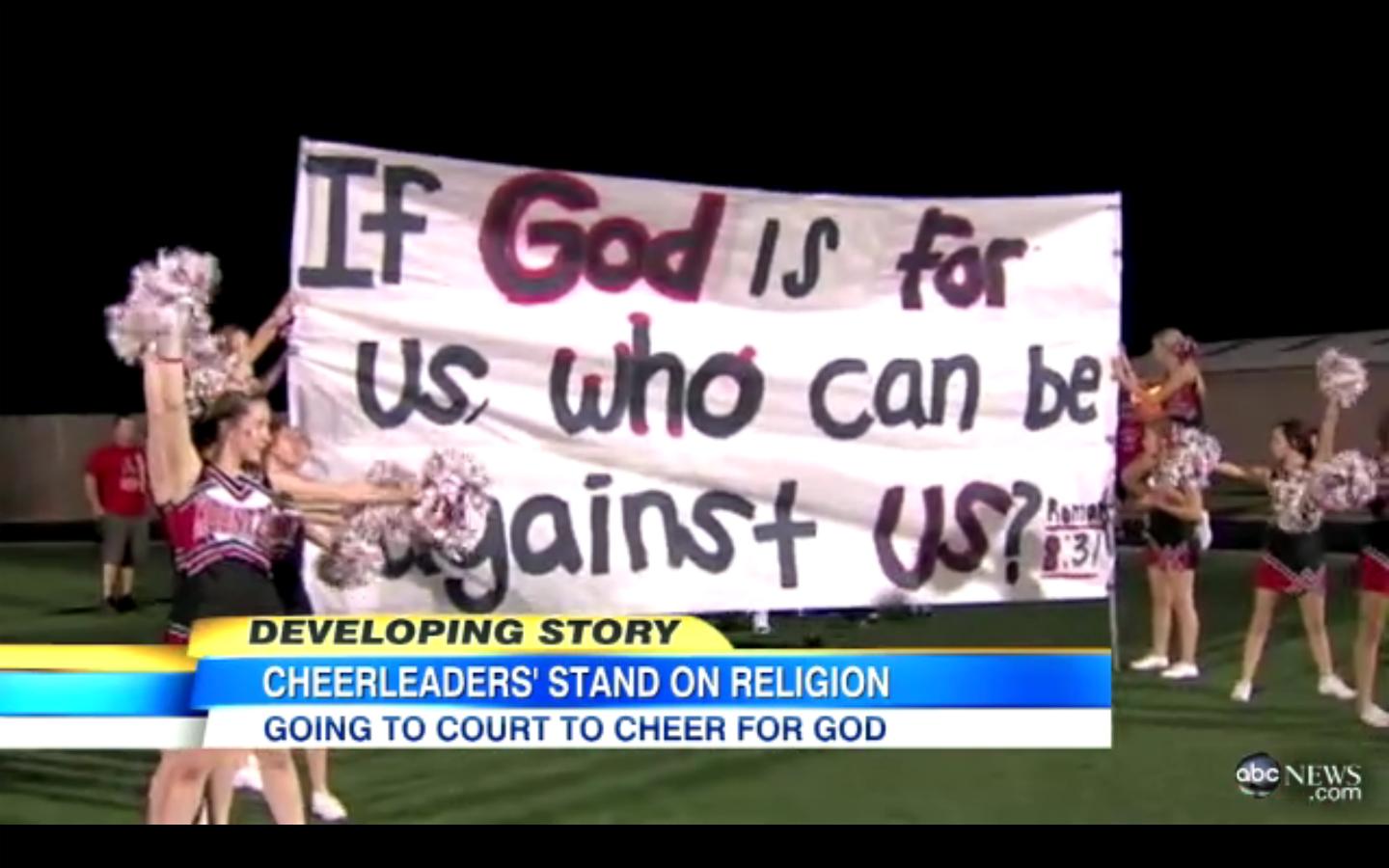 The cheerleaders at Kountze High School, 95 miles northeast of Houston, may deploy Christian-themed banners at school sporting events, a State District judge ruled.  Some photos of the banners (with cheerleaders) may be seen here.

In Texas, religious free exercise cuts a wide swath, as its State Supreme Court displayed in Pleasant Glade Assembly of God v. Schubert (2008).  A member of the church, a suffering Laura Schubert, had hands (lots of them) laid on her, as her faith calls for, and came out of the experience with physical injuries and psychological trauma.  The Court concluded that

The Free Exercise Clause prohibits courts from deciding issues of religious doctrine. Here, the psychological effect of church belief in demons and the appropriateness of its belief in “laying hands” are at issue. Because providing a remedy for the very real, but religiously motivated emotional distress in this case would require us to take sides in what is essentially a religious controversy, we cannot resolve that dispute. Accordingly, we reverse the court of appeals’ judgment and dismiss the case.

No violation of Employment Division v. Smith, 494 U.S. 872 by Laura’s co-religionists. (She should have sued individuals, not the church). No establishment issues in the Texas cheerleaders’ spiritedness.

The real question behind these cases call to mind what Leo Strauss named the theologico-political issue, on our duties to God and country and how they form the exercise and defense of philosophy.  Some of his lectures on this theme have recently been posted on the Leo Strauss Center site.

Kountze High football unites God and country (or at least Texas), but how does philosophy come in? In fact philosophy contemplates what makes sports and religion remarkable.

Sports and religion drive men beyond the ordinary and everyday. The miraculous shot/pass/catch defies the laws of nature, as does prayer. We anticipate miracles, not just in the World Series and in saints, but in the exertions of ordinary men and women and their separation, however modest, from others, athletically or in prayer. Like art, sports and religion are practiced principally for their own sake. While they may have all manner of good effects, at bottom they are useless.

And they are of a moment, an attempt to be immortal, while aware of the limits of the clock or season, or a mere lifetime, a three score and ten, versus eternity. Sports is tragic, salvific religion comic. They need each other. And philosophy seeks to understand what they desire.

The Theologico-Political Question (Part II): A Review of “42”

“Our First, Most Cherished Liberty” and the State

Why Did Harry Jaffa Change His Mind?

To preserve both the country and political philosophy, Jaffa returned to the beginning.