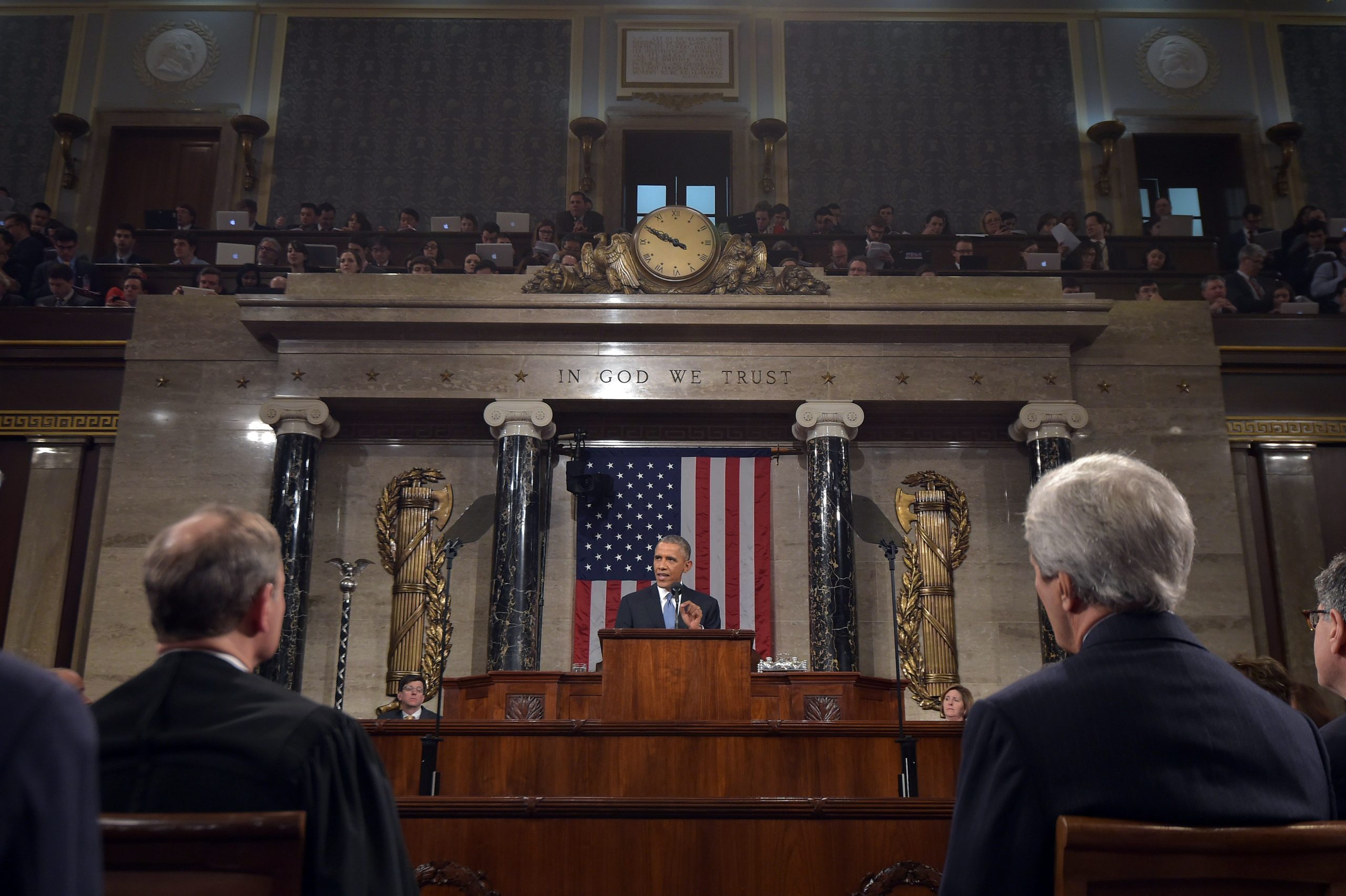 President Obama’s State of the Union Address makes blogging colleague Greg Weiner’s suggestion to abolish it look pretty good. Of the constitutional clause requiring that he address Congress, Greg observes:  “If anything, modern Presidents ought to view its opening phrase—‘from time to time’—as a limit rather than a license.”  I am even more drawn to Frank Buckley’s devastating critique of contemporary presidential government, The Once and Future King: The Rise of Crown Government in America.

I would have thought that Paul Ryan (R-Wis.) of all pols would not have conceded victory to Obama when he attacked Obama’s “class warfare” proposals—which is exactly the way Obama wants them viewed. Or that the congressman characterized the speech as not as extreme as he feared it would be.

Evidently no one heard Obama declare,  “My only agenda for the next two years is the same as the one I’ve had since the day I swore an oath on the steps of this Capitol ­­­— to do what I believe is best for America.” No, he swore an oath to “faithfully execute the Office of President of the United States, and will to the best of my Ability, preserve, protect and defend the Constitution of the United States.” What he feels “is best for America” may well differ from faithful execution of his office and guardianship of the Constitution. So Obama admits he is a law unto himself.

One suspects that he described his “agenda” in this way in order to encourage a vote on impeachment or, better, to further humiliate those who wish to impeach him but decline that duty. But what a bizarre conception of the presidency: calculating how one might draw impeachment charges.

The State of the Union spectacle justified the worst of the Antifederalist fears of a royal court. All that up-and-down gymnastics and applauding must, following Aristotle on virtue-as-habituation, erode any feeling of independence in the legislators, when in fact their duty demands suspicion of the other branches.

The presidency on view last night is certainly the rhetorical presidency of Theodore Roosevelt and Woodrow Wilson, in which Congress is belittled and the public’s passions are aroused. It channels the partisan, centralizing presidency of Franklin Roosevelt, who compared conservative Republicans to Nazis in a State of the Union Address 71 years ago.

Obama deployed his typical rhetorical motif of despising partisanship and espousing reason. He boldly claimed a flabbergasting “breakthrough year for America,” flattered various constituencies, issued veto threats, and praised the vital role of government in “middle class economics”—all in “a budget filled with ideas that are practical, not partisan.”

The President urged that “we need to set our sights higher than just making sure government doesn’t screw things up; that government doesn’t halt the progress we’re making. We need to do more than just do no harm.” This echoes his Second Inaugural chiding that “We must act, knowing that our work will be imperfect.” Activity is all, whether it benefits or not, whether it is principled or not. Politics is about creating spectacles, as Machiavelli taught and as “cash for clunkers”—a golden oldie from six years ago—demonstrated.

Obama has flown directly from his Second Inaugural to this State of the Union Address, a Faust overleaping the political wreckage of 2014’s midterm election. But where is he headed? And where does he want to take us? The direction has always been clear: to be a transformative leftist, far beyond an ordinary liberal (such as Clinton). To do so, he had to purify the Democratic Party. (Thus, he is a mystery to most political analysts, even one as astute as Bill Galston, who thinks Obama still wants significant legislation passed.)

Just by his election, Obama achieved a major part of his goal. His is the first winning ticket in Democratic Party history that did not have a Southerner. His race replaced the need for a white Southerner. Thus, the Democrats could loosen their ties to the conservative South, perhaps beyond his presidency. Other than FDR he is the only Democrat since antebellum times to be elected to two terms while winning a majority of the popular vote. (That his majority shrank points to a weakness, true, but overlooks his lasting achievement.)

He knew that Obamacare would cost him at least the House in 2010. One of the most revealing speeches of his presidency was to House Democrats on the eve of their vote on the Affordable Care Act. He urged, “Don’t do it for me.  Don’t do it for the Democratic Party.  Do it for the American people.” He added: “But what did Lincoln say? ‘I am not bound to win, but I am bound to be true.’” He shamed them into voting to lose and used their idealism to produce the most lopsided Republican majority in the House since 1929.

The other side of purifying his party is demonizing the Republicans. In 1932 FDR, as the Democratic nominee, compared obstinate Republicans to “Tories,” that is, un-American traitors. In his acceptance speech four years later he warned:

It was natural and perhaps human that the privileged princes of these new economic dynasties, thirsting for power, reached out for control over Government itself. They created a new despotism and wrapped it in the robes of legal sanction. In its service new mercenaries sought to regiment the people, their labor, and their property. And as a result the average man once more confronts the problem that faced the Minute Man.

So the Nazi comparison, in the throes of World War II, made perfect sense to Roosevelt.

Obama does not hurl such obvious demagoguery against Republicans. He is much more clever than that, for he has political allies who will do this. The conclusion of his speech last night, like the one he gave to the House Democrats, shows his cleverness—and his condescension:

In other words, Obama seeks a politics without political rancor, an apolitical politics perfect for the administrative state. And what will such a politics look like?

And question-begging arguments are routine for him, on the otherwise contentious issues of abortion, immigration, voting rights, and Ferguson. Last night, on abortion, he used the inarguable formulation “that every woman should have access to the health care that she needs.” Or, following his cloying gloss, “but surely we can agree that the right to vote is sacred,” he tossed in that “it’s being denied to too many.”

Obama calls this kind of performance “a better politics.” He is not incorrect to conclude that “That’s what the American people want. And that’s what they deserve.” It is the way sophists operate: they always give people what they want.

More on Bias in the Implementation of Sexual Assault Laws

Crusading Against Collectivism: A Lost Memoir by Herbert Hoover is Published