Fifty years ago today, Lyndon Johnson, delivering his 1964 State of the Union Address, fired the first shot in the War on Poverty. Within weeks, his young assistant secretary of Labor, Daniel Patrick Moynihan, knew the battle would be lost—but not for the reasons often supposed. There was, he believed, insufficient ammunition in the armories—and the battle plan he helped develop for a frontal assault on the problem gave way to a preference for guerrilla warfare. Therein lie lessons conservatives would do well to heed as new plans to deal with the persistence of poverty are considered. 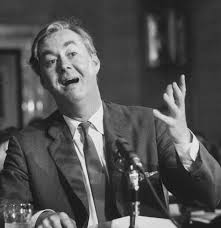 The now largely accepted narrative of the War on Poverty, especially among conservatives, holds that the generosity of Great Society programs induced dependence and other social pathologies among the poor. Moynihan, a critic of the Great Society’s approach to poverty who first alerted the nation to the crisis of welfare dependency in his radioactive yet prophetic The Negro Family: The Case for National Action—and who crusaded for welfare reform throughout his Senate career—has often been linked with that conclusion. In fact, he rejected it.

Far from objecting to its generosity, Moynihan actually argued that the War on Poverty was doomed from the beginning because it did not spend enough on the poor. At a Cabinet meeting in March 1964, the team of which he was a member presented its anti-poverty proposal, a jobs program financed by a tobacco tax. “The President heard us this far,” he later recalled, “pronounced that the administration was cutting taxes not raising them, and reaching for the telephone attached to the underside of the cabinet table, turned sideways and got through to some hapless committee chairman or whomever, leaving the cabinet to understand that the discussion of poverty had concluded.” [1]

Yet despite refusing to commit the resources, the Great Society set ambitious goals. Moynihan, a New Deal liberal, believed in alleviating poverty by channeling public money directly to the poor. The Great Society became obsessed with eliminating poverty instead.[2] The result was a “services” strategy rather than an “income” strategy. The problem with the former, Moynihan argued, was that it actually redistributed income upward, taxing the poor to pay the salaries of middle-class social workers, teachers and other professionals who ministered to them. Once, accosted by Harvard students over cuts in education spending pushed by the Nixon Administration in which he was then serving, Moynihan replied that they, future teachers doubtless among them, were “defending a class interest.”[3]

The War on Poverty later took a disastrous turn from employment and toward empowerment with the legal requirement that funds be disbursed with the “maximum feasible participation” of affected communities. Moynihan lacerated this approach in his book Maximum Feasible Misunderstanding as 1960s chic: It sought to give people power and voice and self-satisfaction, and that not terribly effectively, when what they really needed was money. The government got into the business of financing “community action” agencies that “reeked of the notion of the proletariat.” [4]

Yet for all his criticism, Moynihan never accepted President Reagan’s folksy witticism that “in the war on poverty, poverty won.” On the contrary, to the extent the government had actually spent money on the problem—as it had on the elderly poor—poverty had been vanquished. The claim that the Great Society somehow caused welfare dependency or family dissolution beggared common sense: the Moynihan Report had documented these trends in 1965 based on data ending in 1964, before the War on Poverty began. Families were dissolving and single motherhood was rising in all nations of the Atlantic world, regardless of their welfare policies. (This is not to say Moynihan was closed to the idea that welfare programs contributed to these problems. “We owe it to one another,” he said, to be honest and open on this point.”[5] But he was not willing to accept a correlation as proof of causation.)

Indeed, Moynihan, who understood poverty at root to be a problem of material deprivation, believed spending more on welfare might help stabilize families. He thus waged a career-long fight to “get more money directly into the hands of the poor.” He sought a guaranteed income—an approach some libertarians have recently taken up as a simple alternative to a micromanagerial approach to poverty. The advantage of the guaranteed income as Moynihan proposed it in the Nixon Administration was threefold. One was that it went to families based on the number of children. As opposed to AFDC, which Moynihan characterized as a family allowance but only for “broken families,” it was designed to encourage family cohesion. Second, because the benefit was reduced but not eliminated based on income, it encouraged work.[6] Third, it was a simple transfer of income. Moynihan once invoked statistics indicating that if one-third of the money spent on the War on Poverty had been “given directly to the poor, there would no longer be any poverty in the United States. . . .”[7]

Moynihan, a deep believer in the Catholic doctrine of subsidiarity, according to which a social problem should be addressed by the closest competent social institution to it, argued that families and not individuals should be the relevant unit of analysis in social policy. He was thus concerned that the Great Society seemed to be transferring resources to middle-class professionals to minister to the poor when those funds might have gone directly to strengthen the families of the poor instead. He wrote, for example:

Project Headstart, a program in the war on poverty, is one of the most imaginative and promising efforts to bring hope to slum children that we have seen in this generation. Even so, it must be stated that we are paying women—well-qualified, professional women to be sure—up to $9.20 an hour to look after the children of men who can’t make $1.50. If the working class fathers of the city earned a steady $3.00 or $4.00 an hour, would we need a Project Headstart?[8]

Today, it is widely assumed that the 1996 welfare reform that Moynihan opposed has succeeded. It is true that welfare rolls are smaller; eliminating benefits will do that. The question is what terms of analysis are to be used in evaluating the law. For Moynihan, a child of Hell’s Kitchen, poverty was, again, in its essence an experience of deprivation. In this sense, it persists. The child poverty rate continues to be stuck above 20 percent. Meanwhile, the fact that rates of single motherhood have continued to climb despite the withdrawal of economic incentives for them belies the simple assumption that the poor, apparently not understanding arithmetic, have children for the sole purpose of marginally augmenting welfare benefits.

What lessons emerge from Moynihan’s experience with the War on Poverty? One is to beware the dogma that the Great Society caused social pathologies. Another, as Moynihan emphasized, is that ministering to the poor is a middle-class occupation; transferring resources to them is not. It is unsurprising that interests accrete around the former but not the latter, but it is the latter that might hold more promise. Finally is the primacy of family rather than individuals.

Moynihan—who wrote the 1988 bill that cleared the way for the wave of state-level experimentation with welfare policy that led to the 1996 reform he opposed—believed in federalism. But he also believed in a national commitment to the poor. Michael Gerson and Peter Wehner, in a searching essay in National Affairs, recently quoted Arthur Brooks of the American Enterprise Institute: The “government social safety net for the truly indigent is one of the greatest achievements of our society…. We have to declare peace on the safety net.” Conservatives, coming to terms with—indeed, embracing—a role for government in caring for the indigent, could do worse than to learn from Moynihan’s particular strain of liberalism.

[2] Theodore J. Lowi develops the distinction between “alleviating” and “eliminating” in The End of Liberalism.

[3] The story is told in Godfrey Hodgson’s excellent The Gentleman from New York.

[6] Moynihan later abandoned the guaranteed income based on research suggesting it might encourage family breakup, after which he pushed consistently to protect welfare benefits, especially for children.

[7] Moynihan, Coping: Essays on the Practice of Government, 361 (“except, of course,” he continued parenthetically, “that the poverty level would immediately be reestimated up”).

Why is Originalism Appealing?

Classical Liberalism in 2017: The Best and Worst of Times?

Key Trump policies advanced classical liberalism, but his association with them may damage them in the long run.