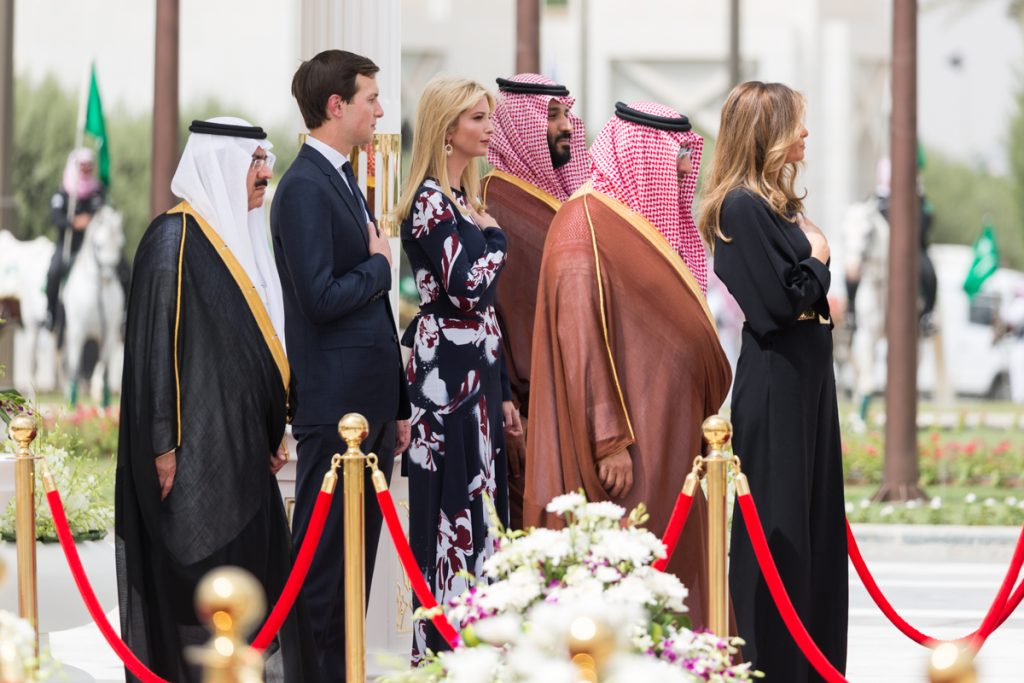 While the House of Saud’s grip on political power in Saudi Arabia may appear as firm as ever, the Saudi royal family in fact walks a narrow tightrope, facing threats to their hold on power from both within and without. Indeed, many of the threats “within” interact with threats “without.” Understanding its attempt to maintain power amidst these many threats helps to understand Al Saud’s actions in Yemen, in the oil market, and its recent actions against Qatar.

The start of Al Saud’s power, and still its centerpiece, was an 18th Century politico-religious bargain between Muhammad bin Saud and a reforming religious leader by the name of Muhammad ibn Abd al-Wahhab. Ibn Abd al-Wahhab taught the need to return to an original, purer form of Islam. Al Saud’s power today still relies in large measure on the continuation of this bargain between Wahhabi religious leaders in Saudi Arabia and the House of Saud.

Americans typically see conservative or “fundamentalist” Islam as a homogeneous entity. But much as fundamentalist Christianity in the U.S. is fractured among a welter of different sects that have divided and redivided from one another, fundamentalist Islam has numerous divisions as well. Many of these variants detest other variants of fundamentalist Islam as much as they detest non-Muslims. (Indeed, they often consider other Muslims to be non-Muslims.) Here I’m not yet talking about the division between Sunni and Shia Islam, although that’s important to understand current Saudi politics, I’m talking only about divisions among Sunni Muslims.

Despite the reputation of Saudi Arabia, Wahhabism is doctrinally a pietistic form of Islam, meaning that it’s politically quiescent toward governance in Saudi Arabia. This was part of the original bargain. Different streams of revivalist Islam, particularly in recent decades, have criticized Saudi rule as insufficiently Islamic and/or as corrupt and decadent. Indeed, Saudi Arabia itself has seen significant amounts of domestic terrorism since at least 1979 with the Grand Mosque seizure. While there was an eschatological part to the seizure (one of the leaders claimed the Mahdi, who in Islamic belief comes before the final judgment), the attackers also objected to what they perceived as the modernizing, or liberalizing, inclination of the House of Saud.

Of note, despite the House of Saud’s reputation for supporting Islamic fundamentalism, its biggest internal threat to its hold on power comes from the right, from Muslims who believe Al Saud is too accommodating toward modernity.

It is at this point that a part of the explanation for Saudi Arabia partnering up with Egypt against Qatar arises: Egypt’s Muslim Brotherhood started in the 1920s as a revivalist movement in Islam. Although it can be understood to share with Wahhabism a fundamentally “conservative” theological orientation, among its many distinctives is opposition to modernizing and Western influences in Islamic countries. It also is critical of corruption in Arab governments. The Muslim Brothers’ broad social agenda distinguishes it from Wahhabism’s more pietistic focus. Many members of the Muslim Brotherhood were given sanctuary, and allowed to teach, in Saudi Arabia early on in response to persecution in secular Arab countries. But the differences between Wahhabism and the orientation of the Brotherhood began to tell. One influence of the Muslim Brotherhood in Saudi Arabia was the development of a revivalist critique of the Saudi monarchy. What started with affinity ended with enmity. This, among other causes, accounts for the common cause of Egypt and Saudi Arabia against Qatar’s support of the Muslim Brotherhood. (Qatar’s support for the Muslim Brotherhood in Egypt, both politically and journalistically through Al Jazeera, needs of course to be placed in the context of the Arab Spring, the removal of President Mubarak from office, the subsequent election of Mohamed Morsi, and the military coup that removed him from power.)

The legacy of the Muslim Brotherhood, however, lived on in Saudi Arabia. The criticism saw opposition to the Saudi government, including some violent attacks. An even broader rupture is rooted in this legacy, however, with the first Gulf War. Saudi Arabia allowed the U.S. to base troops in the country in the run up to the attack on Iraqi forces in Kuwait. The presence of foreign troops in Saudi Arabia wasn’t merely an imposition on nationalistic pride, it is a religious offense, a sign of unfaithfulness, to many Muslims for an Islamic country to need or accept military assistance from non-believers. This precipitated Osama bin Laden’s definitive break with the government of his homeland, and precipitated the declaration of jihad by Bin Laden against the U.S. This lead to attacks on U.S. targets in Kenya and Tanzania, the USS Cole, and then of course to the attacks on September 11.

Despite seemingly sharing a conservative orientation toward Islam with Saudi Wahhabism, the international revivalist movement in Islam became violently opposed to the Saudi regime. Hence numerous terrorist attacks by Islamists with in Saudi Arabia. Hence, more recently, the House of Saud’s recognition that ISIS, and the declaration of a Caliphate, represented an existential threat to its claims to be appropriate caretakers of Muslim holy sites in Saudi Arabia. It is because ISIS tapped into similar theological sentiments as Wahhabism does that it constituted such a threat to the Saudi monarchy. It is again notable that a significant threat to the House of Saud comes from its right, from Muslims who do not think that the House of Saud governs sufficiently Islamically. The nearing elimination of ISIS as an active military threat in the region does not eliminate its views as a continuing theological threat, as do the teachings of international revivalist movement more generally.

Up to this point I’ve focused only on movements within Sunni Islam. While Saudi Arabia is predominately Sunni as a whole, it has pockets of Shia-majority regions. Most notably, its oil-rich eastern province has a predominately Shia population, and one that has proven occasionally restive to the rule of the Sunni House of Saud. (Bahrain’s population is predominately Shia as well, although its rulers are Sunni.)

Theological differences aside (and they do count as well), Shia Iran, newly assertive after the Arab Spring, with the ending of international sanctions, and in the face of continuing difficulties in Iraq and recent trouble in Yemen, is positioned to cause a lot of mischief to Saudi interests and influence in the Gulf region. This belief that it needed to respond to Iranian mischief, and a nascent Shia threat on its border, almost certainly prompted Saudi Arabia to get directly involved in military action along its southern border in Yemen. Saudi Arabia accuses Iran of supporting the predominately Shia Houthi insurgency.

WIth Saudi Arabia fighting a Shia foe in Yemen, with a restive Shia population in its Eastern Province, and Shia Iran just across the Gulf, this adds to the internal crosswinds that threaten to unbalance the House of Saud’s political tightrope. Hence the sensitivity Saudi Arabia shows to Qatar when it appears not to be as hostile to Iran as Saudi Arabia wants it to be. Qatar is a members of the Gulf Cooperation Council, along with the other Arab countries in the Gulf. Saudi aspirations can be seen in its occasional proposals to the GCC to take an additional step to create a real federal system out of the council, much like the European Union.

Finally, then, there is the lower price of oil, a result both of fracking in the U.S. and the need of several OPEC and non-OPEC members to generate oil revenues by opening up the pumps.

This, again, constitutes a more direct threat to the House of Saud than it may at first seem. Because of its vast oil resources, despite its large size, Saudi Arabia is a rentier state. The government uses oil revenues provide massive public benefits to the Saudi population. This is an important part of the implicit bargain between the population and Al Saud that deters both religious and liberal dissent from boiling over in the country. (A massive security apparatus helps as well, of course.) The government was able to avoid any significant trouble during the Arab Spring in large part because of the terms of this bargain with its population.

Saudi Arabia has a lot of wealth stored up, and the cost of oil production is very low. It can still make money on oil when other countries cannot. Nonetheless, it has a population of over 30 million people. Aramco is not simply an oil company, not even just a state-owned oil company, it exists first and foremost to implement the perquisites of a rentier state, it exists to transfer oil rents to Saudi citizens.

To see Al Saud’s doubts as to its ability to maintain the current bargain in the long run we need look no further than plans to start selling shares of Aramco. Saudi steps toward selling shares in Aramco aren’t a product of any immediate economic need, rather it results from political calculation regarding its role in the rentier society Aramco supports.

With the seeming shift in the structure of the international oil market, along with a quickly growing population, the current politico-business model for Aramco cannot be sustained. The House of Saud needs to start putting distance between itself and Aramco. The House of Saud needs some plausible deniability when Aramco is no longer able to deliver the rentier goods it currently delivers. Starting the privatization of Aramco now will only help with that when the crunch comes.

These are only a few of the issues that Al Saud faces in Saudi Arabia. There’s a lot more going on. The upshot, however, is that the House of Saud faces increasing pressures on its rule from within the country, from other countries, and from the international economy. Despite the seeming removal of ISIS as a military threat in the region, and as a threat to the religious basis for Saudi rule, it is difficult to sketch a trajectory where the power and influence of the House of Saud, and of Saudi Arabia, goes anywhere but down. The House of Saud already walks an extremely narrow tightrope. And it’s only getting narrower.

Law and Norms: The Case of Kevin Durant and the NBA

The Sounds of Allied Evasion

Who Are ISIS’s Useful Idiots – Supporters or Opponents of the Police Prioritizing of Hate-Crime?

The case of Kujtim Fejzulai shows just how easily those who devote their whole professional lives to the “assessment” of such people may be deceived.