A while ago, I commented on Jim Ceaser’s “Four Heads and One Heart.” Ceaser believes that the four competing intellectual traditions (the heads) that comprise the modern American conservative movement are united by a common loathing of liberalism (the heart). That piece still shapes my thinking, and I still recommend it. But I want to add to Ceaser’s theory by proposing that there’s an intellectual attitude that all four heads share; there’s something on which they all agree.

There’s a common intellectual commitment: a deep suspicion of what I’ll call long-term extrapolation. By long-term extrapolation I mean taking discrete, finite data points and extending them either logically, in the here and now, or chronologically, into the past or the present. Progressivism has, I think, a great fondness for long-term extrapolation. Even the name of the movement suggests that there’s a progress to be achieved, based on what we know now, and can know about the future. Conservatism, by contrast, is more skeptical about the experts peering into their crystal balls and telling us what is going to take place in the future, took place in the past, or should occur now. Don’t buy it? Let’s look at three examples.

But first let me offer an explanation for why I think this analysis is important. Conservatives, libertarians, et al. regularly dismiss what the experts have to say, but it’s rhetorically difficult to challenge the experts. After all, how can a politician confront the scientists, or a businessman the economists? Even worse, it may be all too easy for the casual observer to conclude that the conservative coalition is largely anti-intellectual, concerned not so much about the truth as they are concerned to defend their dogma, either secular or religious. In fact, some conservatives support this view by their blatant anti-intellectual rhetoric or by rhetoric that could be taken as such.

The four heads ought to offer a unanimous response to this challenge: conservatives aren’t anti-intellectual. They just don’t want the country to be hornswoggled by someone who claims to know something but does not actually know anything at all. The controversy isn’t a question about particular, commonly accepted facts but is instead about whether the further claims are justified by the data. What’s often in question is whether or not we can conclude something in addition to the comparatively small amount of information that we actually have. Progressives are more optimistic about our abilities to do so; conservatives are more skeptical. Skepticism by itself isn’t anti-intellectual; caution and care over what we believe is surely a hallmark of an educated mind, not evidence against it.

Now to the three examples. 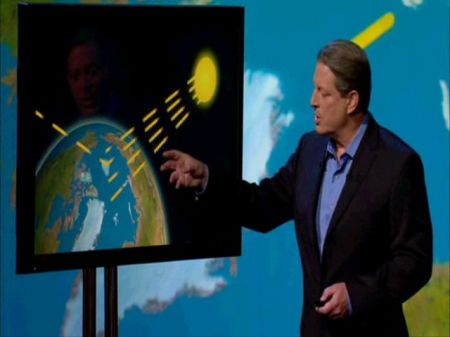 Future: Climate change. First, there’s long-term extrapolation about the future. The debate over global warming or climate change is regularly framed as a competition between the nonscientific neanderthals and their wunderkind scientific competitors. Even the title of Vice President Al Gore’s movie, An Inconvenient Truth, speaks to the progressive narrative on climate change: there are things happening that some people (the conservatives) happen not to like, but they should realize that the (long term extrapolations of particular scientists which therefore must be the) truth isn’t always agreeable to their lifestyles. But that’s not the point. There are truths that are inconvenient. Certainly. The question, though, is whether or not the so-called “truth” is, in fact, true. Is there not room for skepticism here? Conservatives may chuckle at this month’s news that the polar ice cap has grown dramatically, and it’s hard not to chuckle at this nugget:

Only six years ago, the BBC reported that the Arctic would be ice-free in summer by 2013, citing a scientist in the US who claimed this was a ‘conservative’ forecast. Perhaps it was their confidence that led more than 20 yachts to try to sail the Northwest Passage from the Atlantic to the Pacific this summer. As of last week, all these vessels were stuck in the ice, some at the eastern end of the passage in Prince Regent Inlet, others further west at Cape Bathurst.

But the point here isn’t whether or not global warming is true or false. After all, a believer in long-term extrapolation will just as easily panic over the coming Ice Age, and the firm believer in government action will call for whatever it could possibly take to prevent it. Conservatives, by contrast, will be just as skeptical about the coming Ice Age as some of them have been about the former vice president’s Inconvenient Truth. That’s the point: the question isn’t the current data; we can all see the satellite imagery. The question is whether the handful of data points that we have is sufficient to tell us what will happen in the future.

Present: Economics. Next, let’s talk markets. Here we’re not talking about long-term extrapolation into the future but about a working assumption that, somehow, we can take a series of data points, put them into our financial models, and discover by them what things ought to cost. Progressives are confident, or at least hopeful, that financial models will yield positive results in the form of new information that is the result of complex, mathematical manipulations of a given data set.

Libertarians have a different way of getting to this information: the market. “One reason why economists are increasingly apt to forget about the constant small changes which make up the whole economic picture is probably their growing preoccupation with statistical aggregates, which show a very much greater stability than the movements of the detail”—that’s Hayek in “The Use of Knowledge in Society.” His point, lest there be any doubt, is not to encourage economists to forget about the constant small changes; on the contrary, he wants us to avoid central planning and its reliance on a bird’s eye view of human life.

The four heads of the conservative coalition are generally skeptical about people claiming to know something that’s not per se investigable, especially when those people cannot actually see it, either, but claim to know it on the basis of a careful analysis of a comparatively small number of data points.

Past: Evolution. Some members of the conservative coalition are famously (or infamously) skeptical about macroevolution, and most especially about claims that macroevolution explains the development of all biological life, including man. They are not alone in the U.S., with only 21% of Americans in a recent poll saying that humans evolved without divine guidance. Religious beliefs obviously play a role, but I think skepticism about long-term extrapolation plays a role, too—it’s just that this time it’s about extrapolation into the past.

Take the following example. (I know that anecdotes aren’t surveys, but that doesn’t mean they’re entirely useless!) Virginia Heffernan, a former New York Times writer now with Yahoo News, achieved no small amount of notoriety by saying that she is a creationist. In “Virginia Heffernan’s Shameful Confession,” Laura Helmuth takes Heffernan to task, as does Hamilton Nolan in “Yes Virginia, There is a Darwin.” Nolan summarizes Heffernan’s confession in a sentence: “Virginia Heffernan is a science-phobic angel-believing climate change skeptic.”

If the above analysis is correct, she may also be a libertarian. She’s already evidenced a skepticism about long-term extrapolation for the future (climate change) and for the past (evolution). If she shows skepticism about these two, then it’s not farfetched to assume that she’s skeptical about central planning in the present. (And if she’s not yet a member of the conservative coalition, then she is by destination.)

Regardless, she’s learning the hard way that “it is almost heresy to suggest that scientific knowledge is not the sum of all knowledge.”

In case you’re wondering, that’s not a quote from William Jennings Bryan’s closing argument at the Scopes trial. It is, instead, another quote from Hayek’s “The Use of Knowledge in Society.”

What if the world we live in truly is as unpredictable and contingent as the “noise” that surrounds us suggests?

Pope Benedict XVI was a dominant force in the intellectual debate over the problems of progressive liberalism and our need for tradition.