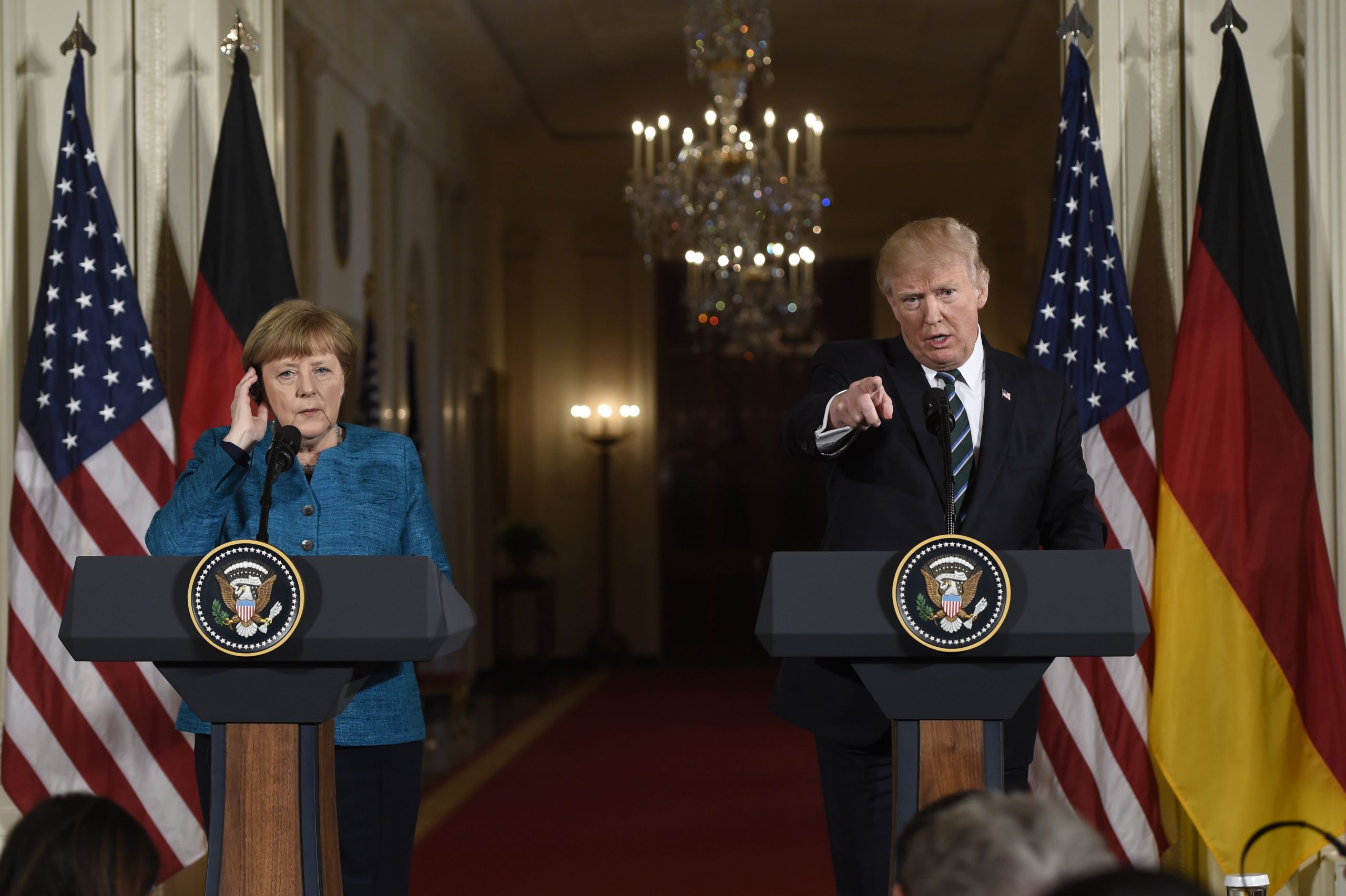 Since Donald Trump unexpectedly won the presidency in November, his foreign policy pronouncements have received considerable scrutiny from those anxious to elicit from them how potentially detrimental his presidency is liable to be to the so-called liberal international order. By this expression is meant that web of alliances and international arrangements and organizations that the United States has been instrumental in helping to create and support since 1945 to promote global peace and prosperity. Most notable among the elements of this global order are such bodies as the United Nations, NATO and the European Union, as well as that medley of treaties and entities created to foster international trade and commerce such as NAFTA and the WTO.

Among scrutineers of Trump’s pronouncements, the consensus is that his views augur badly for the future of this order. Adding considerable weight to this elite chorus is the survey published just after Trump’s victory by the pair of historians of international relations Charlie Laderman and Brendan Simms of Great Britain.

They conclude that the liberal international order enjoys a very uncertain and insecure future under the current administration. They write:

Mr Trump represents a fundamental departure . . . from the entire bipartisan consensus that has existed in US foreign policy since the end of the Second World War . . . In short, by contrast with every single Democratic and Republican President since the Second World War, including George W. Bush, Trump rejects the liberal international order.

Essentially, what Laderman and Simms seek to establish is that, since as early as 1980 when Donald Trump made his first public comments about America’s foreign policy, he has consistently argued that weak political leadership since the end of World War II has allowed his country to become economically and militarily exploited by supposed allies. America has also suffered, Trump maintains, deindustrialization through the economic malfeasance of such trading partners as China and Mexico. Further military embarrassment and humiliation has been dealt to America by minor hostile powers like Iran, not to mention such rogue elements as Al Qaeda and ISIS.

What America needs to do, Trump claims, is make itself great again by divesting itself of uneconomic and unnecessary obligations and alliances – unnecessary and uneconomic, that is, according to a very narrowly conceived construal of national interest.

Here are some vignettes of Trump’s that Simms and Laderman cite to illustrate for how long and consistently he has been lamenting about what has been going wrong for America under its poor leadership:

“That they [the Iranian Revolutionary Guard] hold our hostages is just absolutely and totally ridiculous. That this country sits back and allows a country such as Iran to hold our hostages, to my way of thinking, is a horror.” (1980)

“For decades, Japan and other nations have been taking advantage of the United States. . . . The world is laughing at America’s politicians as we protect ships we don’t own, carrying oil we don’t need, destined for allies who won’t help . . . Make Japan, Saudi Arabia and others pay for the protection we extend as allies.” (1987)

“Everything’s a compromise today. We don’t want to anger Japan . . . They’re laughing at us! Look at the way we opened up the Persian Gulf for Japan to get oil for Saudi Arabia and Kuwait to make money. Why aren’t they paying us for this?” (1989)

“The United States has become a whipping post for the rest of the world . . . I have said on numerous occasions that countries like China, like India, like South Korea, Mexico and the OPEC nations view our leaders as weak and ineffective and have reportedly taken advantage to the tune of hundreds of billions of dollars a year… I love open markets, but not when China is manipulating the currency.” (2011)

“You have to take jobs away from other countries, China, India, all of those countries; they’re taking our jobs . . . We’ve made it so good for Mexico; what they’re doing to us is unbelievable.” (2013)

Despite disavowing any attempt to judge the “truth content” of Trump’s campaign statements, in actuality our two authors deliver a swinging indictment of them. Thus, for example, regarding his reiterated contention that China has long been engaged in currency manipulation and sharp practice at America’s expense, they observe: “The charge . . . might have been true ten years ago but there is not much justice to it today.”

Our authors then point out that, were Trump, as he has threatened, to impose a heavy tariff on imports from China, this might prompt “retaliatory measures in the South China Sea” thereby risking military confrontation with China.

Their greatest misgivings about Trump’s likely foreign policy arise from his threat to withdraw support for America’s NATO partners, especially when combined with his longstanding, undisguised admiration for Russia’s President Vladimir Putin. Laderman and Simms argue that Putin might feel emboldened by NATO’s implosion to reclaim as a part of Russia’s sphere of influence those former Warsaw Pact countries that have sought, since the break-up of the Soviet Union, to align themselves with the EU and NATO. They write:

By throwing doubt on America’s commitment to upholding the NATO charter, he risks placing Poland, the Baltic and the Black Sea states in the firing line . . . It is one of the many failings of his foreign policy . . . Europe will effectively be on its own against Russia . . . President Putin may be emboldened to take risks, in Ukraine, in Eastern and Northern Europe and more generally.

The suggestion that a U.S.-underwritten NATO alliance is needed by the Baltic and other former Warsaw Pact states like Poland to protect them from Russian aggression rests on flimsier evidence than our authors realize. What looks like Russian aggression can equally seem no more from Russia’s point of view than justified self-defense against Western expansionism. After all, why should not the stationing of American and other NATO forces on its borders be considered no less unjustifiably provocative and aggressive than was the Soviet Union’s stationing of nuclear missiles in Cuba?

While doubtless there is much about which to be concerned vis-à-vis the Trump presidency, his being overly favorably disposed towards Russia and Putin remains a concern that to date seems without warrant.

President Trump is by no means the first major American policymaker to have vehemently criticized the relevance of NATO in upholding liberal political institutions and states. That distinction must surely go to the man who was arguably the chief architect of the entire postwar liberal international order, including and especially the creation of NATO. That man is George F. Kennan, who first articulated in his famous Long Telegram of 1946 the need for a policy of containment of the Soviet Union. The essay was later anonymously republished as “The Sources of Soviet Conduct” in the journal Foreign Policy in 1947, where it had influence on the creation not only of NATO but what has become the European Union.

While Kennan was persuaded of the need for NATO to contain the Soviet Union, after the collapse of the latter in 1990, he became equally as unpersuaded of the need for NATO to incorporate the former Warsaw Pact countries. He regarded this eastward expansion to the borders of Russia as needlessly provocative and potentially catastrophic to world peace. In an interview with Kennan in 1998, Thomas Friedman of the New York Times quoted the 94-year-old former diplomat on the entrance into NATO of Poland, Hungary and the Czech Republic:

I think it is the beginning of a new cold war . . . I think it is a tragic mistake. There was no reason for this whatsoever. No one was threatening anybody else. . . . Don’t people understand? Our differences in the Cold War were with the Soviet Communist regime. And now we are turning our backs on the very people who mounted the greatest bloodless revolution in history to remove that Soviet regime . . . Of course, there is going to be a bad reaction from Russia, and then [the NATO expanders] will say that we always told you that is how the Russians are—but this is just wrong.

Kennan concluded the interview with one final note: “’This has been my life, and it pains me to see it so screwed up in the end.”

Facts and Myths of Mass Incarceration

It is Trump judges who would allow states to do just what the Illinois Senate wants to do in SB0145 as it seeks to prevent Trump’s reelection.

The Dangers of an American Caste System