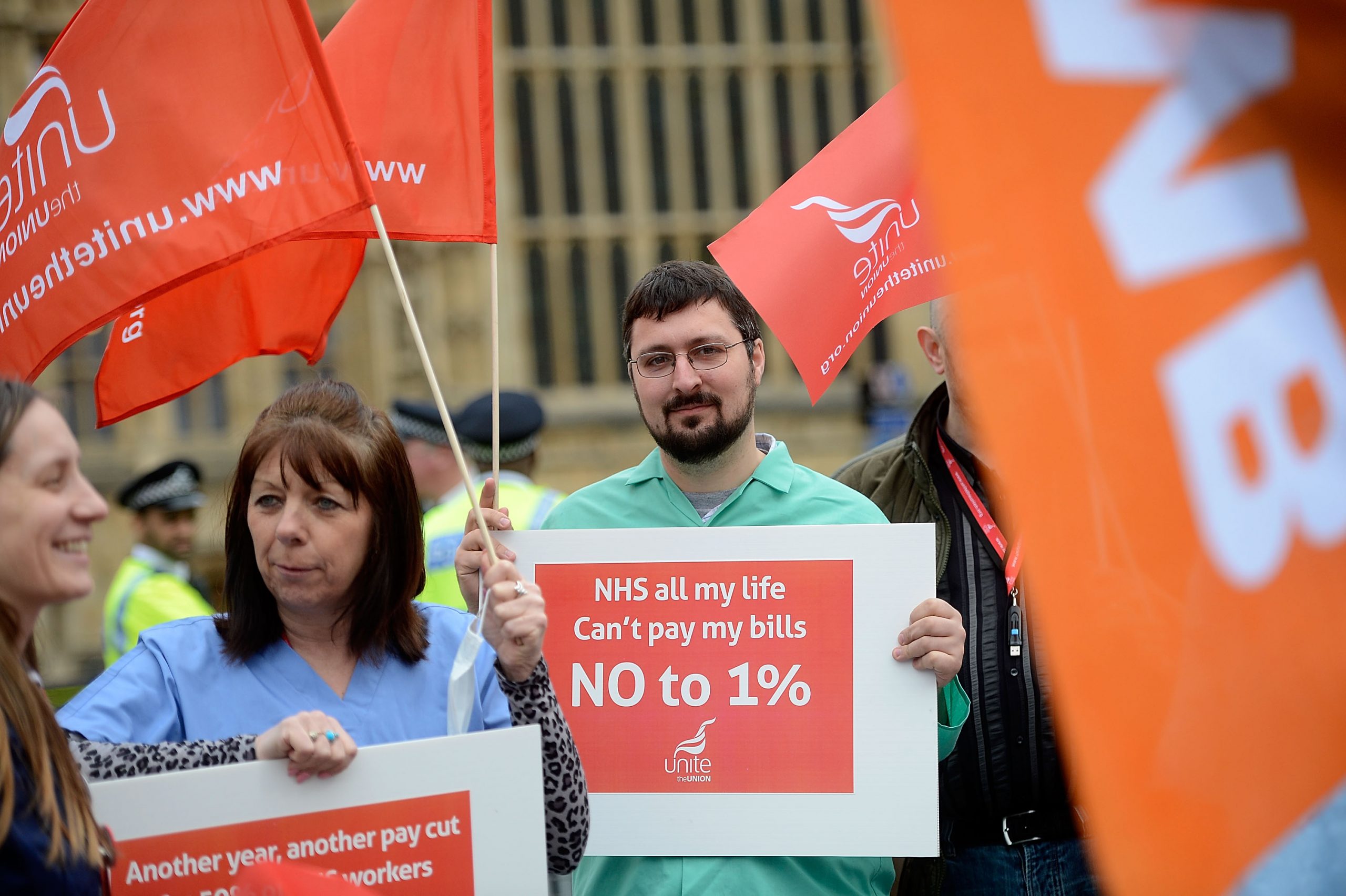 Protests against NHS cuts ahead of the Budget on March 19, 2014 in London, England. (Photo by Bethany Clarke/Getty Images)

Public spending seems as if it were attached to a ratchet because it moves in one direction only, which is to say upwards. Even if a downward movement is occasionally discernible, it is generally small, easily reversible, and the result of so ferocious a political struggle that it discourages further attempts of the same kind.

It is not difficult to see why this should be. Those who receive money from the public purse—whether directly, through salaries or welfare payments, or through the more hidden and subtler mechanism of government contracts awarded to private companies largely or entirely dependent on those contracts—do not like to see their incomes shrink. In this, they are like the rest of us. A privilege once acquired is relinquished only reluctantly. The very succinct French expression for this, les acquis, denotes social and economic “rights” or assets that, once granted, must be maintained. What I have, I hold. This is, if not quite a basic human instinct, at least a very common attitude.

Thus an increase in public expenditure at once creates a vested interest, often comprised of individuals who can be expected to go to the polls at election time. It is not hard to persuade such people that those arguing for the limitation of public expenditure are mean-spirited and ungenerous, concerned only to reduce their own tax bill for selfish reasons. It is cruel and foolish to reduce expenditure on, say, health, education and welfare, for who is not for better health, education and welfare? By definition welfare is good: does not the Oxford English Dictionary define it as “The state or condition of doing or being well; well-being, prosperity, success; the health, happiness, and fortunes of a person or group”? Those who would reduce expenditure on welfare must therefore be in favor of poverty, failure, illness, and misery.

In politics, connotation usually triumphs over denotation. If public money is spent on health, education or welfare, the public (or much of it) is inclined to believe that a healthier, more educated and well-off population must result. This is a little like believing that an archer, aiming at a target, must hit the bull’s eye just because that is what he aims at.

And yet the British public has been persuaded that this lack of increase represents “austerity” or something even worse, namely cold-hearted, Dickensian penny-pinching, in which millions of forlorn Oliver Twists have been left asking for more.

Thus the following headline a few days ago in one of our premier newspapers: “The Guardian View on Spending Cuts: Unspeakable Horrors.”

One might think that such a phrase, in a world in which journalists are beheaded in Syria, tourists are slaughtered in a Tunis museum, worshippers in Shia mosques in Yemen, and villagers in Nigeria, would best be reserved for events of that nature. If stagnation in public expenditure produces “unspeakable horrors,” what words are left to describe the barbaric actions taken against innocents around the globe? Deflation might be undesirable economically, but it is surely desirable in public discourse.

Nevertheless, the Guardian editorial of which that was the headline is worthy of attention. For it is undoubtedly true that those who rely on government benefits are relatively and perhaps even absolutely worse off than they were a few years ago. While this is not worthy of the headline, perhaps the “horror” was in permitting and even encouraging people to lead the welfare way of life in the first place. In that case it would be an editorial comment, not on raw material want, but on the adoption of a mode of existence without self-respect.

If those claiming government benefits are worse off, it cannot be because of reduced expenditure. It is true that the amount spent on welfare has stagnated in nominal terms and therefore declined in absolute ones. But the unemployment rate fell by 25 per cent in the same period, and those claiming any kind of welfare benefit at all declined by 13 per cent between May 2012 and May 2014 alone. In other words, there was no obvious reason why those on benefits should have been worse off, certainly not absolutely, and probably not relatively, either, since real wages stagnated or even declined in the same period.

This is another example of a tendency for public expenditure, once it has reached a certain level, to sever any connection with its ostensible goal or purpose. It would be an exaggeration to say that the main beneficiaries of such public expenditure are the people working in the public sector, for it is clear that schools and hospitals, for example, must offer some service to the young and the sick, respectively; but the main purpose of public sector of the public sector, as against its main beneficiaries, becomes the preservation, or if possible the improvement, of its privileges.

This is quite clearly illustrated by Britain’s National Health Service. For the last two or three years, expenditure on it has not risen by more than the rate of inflation, which in the context amounts to a cut. Of course, if the demand for health care has risen during this period, pressure on the budget would have risen, other things remaining equal. Thus the shroud-wavers of the Guardian school recount the “unspeakable horrors” caused by this failure of the government to increase expenditure further. People working in the Service do not hesitate to frighten the public with warnings of horrors to come if more money from the public purse is not forthcoming.

Now the largest item of expenditure in the Service is, not surprisingly, wages—and they rose by 25 per cent per head between 2000 and 2010. No one in the Service, as far as I know, has ever suggested even the most modest reduction in wages as a means either of preserving or expanding services to the public at a time of relative financial difficulty. To save money, employees always prefer economies elsewhere, that is to say a reduction in services rather than a reduction in wages, the latter of which would have a significant multiplier effect on the money available for the work to be done.

Again, it is not in accordance with human nature to request the diminution of one’s own wages for the benefit of others; but that fact that workers in hospitals would far prefer that operations be cancelled than that their wages be cut exposes their pretensions to be more concerned for the public good than for their own standard of living.

If it were true that the attempt, not very drastic, to rein in public expenditure brings unspeakable horrors, what nation of wards of the state have we produced?

Brennan’s Best or the Court’s Worst?

Goldberg v Kelly illustrated Brennan's jurisprudence—his confidence that the Court was better than the political branches at making social policy.