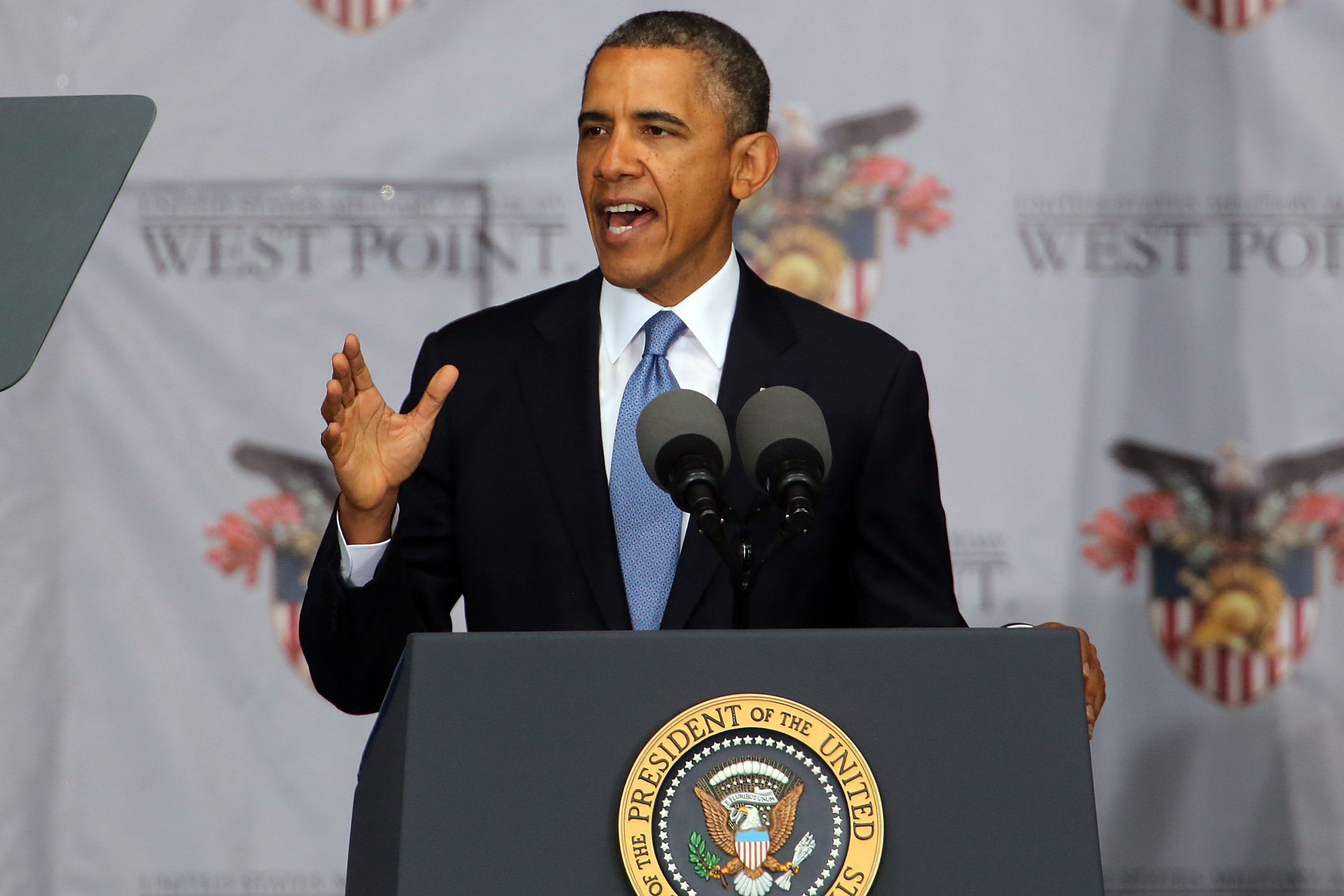 West Point’s graduating cadets were patriotic props for President Obama’s “major speech” on foreign policy. Heavy advertisement of the speech, pre and post, tells us that others were his intended audience. The speech was a defense of his conduct of foreign policy against critics whom he did not name but characterized gratuitously, together with a promise to double down on that conduct in the future.

So it really wasn’t directed at foreign friends or foes. It was an act of domestic politics, and of “major” importance, because Obama’s decisions had been criticized unusually heavily in these election-campaign months—including by persons who normally pay little attention to foreign affairs. His audience was really the loyal media whose tolerance he may have exceeded, and even some of his political base.

The technique that Obama used to reach the newly crucial “low information voters” is one that lazy freshmen take away from “Writing 101” courses: build two opposing straw men with unattractive generalities, and place yourself squarely in the moderate middle between them with attractive generalities.

Thus Obama distanced himself from those who “think military intervention is the only way for America to avoid looking weak” and abjured “a strategy that involves invading every country that harbors terrorist networks,” as if anyone were advocating such a strategy. And he set himself apart from nameless “self-described realists”—the only example of whom he implied was no less than George Washington—who argue that “conflicts in Syria or Ukraine or the Central African Republic are not ours to solve.”

Not that the President affirmed that they are ours to solve, you understand—only that the proposition that they aren’t amounts to “American isolationism.”

Then, rising majestically above these unreasonable alternatives, he set forth the kind of world he would like, “a world where schoolgirls are not kidnapped; where individuals aren’t slaughtered because of tribe or faith or political belief . . . a world of greater freedom and tolerance,” and he promised to “use military force, unilaterally if necessary, when our core interests demand it: when our people are threatened; when our livelihoods are at stake; when the security of our allies is in danger.”

Such rhetoric shows the Obama team’s infantile intellectual level as well as its contempt for its audience. And it further challenges the media’s will to keep believing in him.

The President, recall, had embarrassed his media supporters by switching from several “red lines” of menace toward Syria’s Assad regime to effectively guaranteeing its permanence via a fraudulent agreement with Russia. At West Point, he continued the equivocation:

I made a decision that we should not put American troops into the middle of this increasingly sectarian civil war [in Syria], and I believe that is the right decision.

I will work with Congress to ramp up support for those in the Syrian opposition who offer the best alternative to terrorists and brutal dictators.

More recently, he had blustered about stopping Vladimir Putin from imposing Moscow’s will on Ukraine, but tailored U.S. actions to the diminutive dimensions of the German business community’s willingness to displease the Kremlin. So, at West Point, he claimed that his coordination with the European allies had “isolated Russia” (even as Russia had concluded the energy deal of the century with China) and had provided “a chance for the Ukrainian people to choose their future—without us firing a shot.”

He had blustered about stopping Iran’s nuclear weapons program, then concluded an agreement that incorporates that program. Of this he said at West Point: “for the first time in a decade, we have a very real chance of achieving a breakthrough agreement, one that is more effective and durable than what we could have achieved through the use of force.”

In sum, he challenged an Obama-friendly press corps to re-label as “American leadership” and “American strength” what they have judged as Obama’s failures. By so doing, he asks them to choose between their partisan loyalty and their intellectual integrity—somewhat as the man who, having been caught in flagrante, asked his wife: “Who are you gonna believe, me or you lyin’ eyes?”

The speech’s only concrete commitment was a domestic one offered to his political base: “Next year, I intend to make sure America is out front in putting together a global framework to preserve our planet.” The villains of this “foreign policy” address were stateside: “We can’t call on others to make commitments to combat climate change if a whole lot of our political leaders deny that it is taking place.” These enemies of the planet are also dumb enemies of peace: “We can’t try to resolve problems in the South China Sea when we have refused to make sure that the Law of the Sea Convention is ratified by the United States.”

Neither in that speech nor anywhere else has Obama, or anyone else, explained how a rise or fall of “x” percent of the 0.04 percent of the earth’s atmosphere made up of carbon dioxide has ever raised or lowered the earth’s temperature by “y” degrees, any more than anyone has ventured to explain how U.S. ratification of the Law of the Sea Convention might dissuade China (one of the treaty’s signatories) from continuing to violate it. But fighting “climate change” (known as global warming before recent cold weather) and the Law of the Sea are parts of the Democratic Party’s socio-political identity.

There may be things that Barack Obama is not good at, but he has proved to be very good at tailoring his words to his audiences.

Public relations seems to have been the Afghanistan War’s most successful operation.

Executive Power Should be an Important Issue in the Presidential Campaign