A friend over at NRO’s Postmodern Conservative blog recently asked which contemporary French authors might profitably be read by American conservatives. As a Francophone who has translated French philosophers from this and previous centuries, I thought I’d contribute my two cents.

My criteria were: 1) What could help American conservatives better understand Europe, the evolving nature of liberal democracy, and the pathologies of the age, both abroad and at home? and 2) Who are the contemporary French authors who could speak to a fairly diverse cohort?

A caveat: The works I recommend are available in translation. If you know French, your range of choices is much greater than what I list here.

The single best French author on liberal democracy and a host of related matters, a genuine political philosopher, is Pierre Manent. Born in 1949, student of Raymond Aron, and cofounder of the superb journal Commentaire, Manent just retired from teaching at the Ecole des Haute Etudes en Sciences Sociales in Paris. Three of his books will start you on your way: A World beyond Politics? A Defense of the Nation-State (2006); Democracy without Nations? The Fate of Self-Government in Europe (2007); and Metamorphoses of the City: On the Western Dynamic (2013).

The first, which appeared originally in French shortly after the attacks of September 11, is a capacious analysis of the contemporary liberal democratic world, with particular focus on France and Europe (and, to a lesser extent, America). Its chief claim is that “the European construction” faced a fundamental choice: become a genuine political community, with defined borders, real martial capacities, and genuine institutions of political deliberation and common action; or continue to pursue the will-o’-the-wisp of a humanitarian region knit together by commerce, human rights, and international law, with predictable untoward consequences. Manent here introduces a key concept, “political form,” and employs a broadly Aristotelian understanding of politics, to critique the apolitical humanitarianism dominant on the Continent, while recognizing the precious contributions of modern liberalism and democracy to the European adventure.

Manent updated his consideration of the European project in a book entitled La raison des nations, which I translated as Democracy without Nations? This brief volume is filled with deft analyses, penetrating criticism, and brilliant aphoristic formulations. Normatively, it pairs “community” (echoing the Greek and Aristotelian political koinonía) and “communion” (Christian and Pascalian) in order to analyze the distinctive European creation, “the Christian nation,” a.k.a. the modern nation-state, and to indicate the sources that helped form Europe’s distinctive nature and vocation. Modern small “d” democrats ignore these sources at their peril. 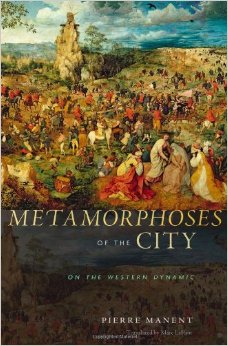 Metamorphoses of the City is, to use the French phrase, a tour de force. It is Manent’s long-matured analysis of Western civilization from Troy to the EU, effected through a specifically political lens, and employing a single hypothesis: Man is a political animal. Brilliant readings of Homer, Augustine’s City of God, and the modern thinkers attempting to build a new order of things are but a few of the intellectual treats of this magisterial work of scholarship and reflection.

As fascinating and valuable as they are in themselves, Manent’s thoughts on France, Europe, and Western civilization can also serve as foils for American conservatives who seek fresh ways of understanding our liberal democracy and our status as sons and daughters of the West. They provide essential intellectual and political content, as well as valuable political and moral guidance. And they’re a pleasure to read (if one of the translators is allowed to say as much).

Philippe Bénéton’s Equality by Default: An Essay on Modern Confinement (2004) would likewise be an illuminating book for American conservatives to read to better understand our political and cultural condition and conflicts. Bénéton, who teaches political science at the University of Rennes, employs a master essayist’s pen in addressing reason, equality, and freedom—the chief intellectual and moral commitments of liberal democracy. By way of a series of studied contrasts, he sketches two versions of each. The result is an arresting account of our conflictual common life.

In its good forms, reason is substantial and genuinely scientific[1]; in its bad, merely instrumental and scientistic. In its good form, equality, too, is substantial—that is, based upon a rich notion of a common human nature, one that is intrinsically dignified, because the home of reason, conscience, and freedom, but which also requires discriminating recognition of further unequal achievements or degradations of that given nature. In its bad form, equality is “by default,” that is, emptied of substance: We have nothing in common but basic biological components and a mysterious plasticity upon which to operate and create our real humanity. Society or culture used to perform the operation; now we can increasingly do so on our own by employing biotechnology and implementing individual designs.

After exposing the often unacknowledged presuppositions behind the defective forms, Beneton holds up their God-awful consequences in terms of diminished humanity, shrunken human ties, and obvious inadequacy to human reality, for the reader’s inspection and revulsion. His positive alternatives therefore become more attractive, especially since he tends only to sketch them, thus leaving room for the reader to fill them in for himself.

Chantal Delsol (born in 1947, professor at the Université de Marne-la-Vallée, founder of the Hannah Arendt Institute) can help in this and many other regards. There are English translations of three of her books, conceived by their author as a trilogy, and also of excerpts from her fundamental work of philosophical anthropology. The trilogy titles are: Icarus Fallen: The Search for Meaning in an Uncertain World (2003); The Unlearned Lessons of the Twentieth Century: An Essay on Late Modernity (2006); and Unjust Justice: Against the Tyranny of International Law (2008).

The trilogy focuses on Western European human beings and societies after the collapse of communism; it forms a sort of “spiritual sociology” insofar as it treats of “the spirit of the times” and “the state of mind” (esprit) of her contemporaries in the post-1989/91 period. As a philosopher, she considers their ideas and attitudes concerning the true, the good, the just, while as a political philosopher she severely criticizes the false inferences they draw from the totalitarian past and the false hopes they project for the future.

Significant claims of truth are said by her contemporaries to be intrinsically ideological and implicitly totalitarian. Ironically, relativism then becomes the official truth—allegedly the only truth appropriate to democracy—and hardens into a dogma. The good is diminished to democratic tolerance and the avoidance of suffering (with the forms of unacceptable suffering ever-expanding), and the parlous dialectics between the just and the law are to be replaced by a legal order said to be simply moral, because based upon human rights. Equity, prudence, and the risks of judgment and decision find no place in this scheme.

Implicit in Delsol’s analysis is a basic anthropological view, captured by the quintessential French phrase, la condition humaine. Her considered thoughts on these fundamental matters are presented in the aptly entitled Qu’est-ce que l’homme? (What is Man?) Two chapters of this as-yet-untranslated work can be found in a collection of essays devoted to her thought, Lucid Mind, Intrepid Spirit (2011). Self-conscious mortality, a moral sense, an unbridgeable tension between a need for solidarity and a desire for autonomy, the necessity and contestability of cultural answers to the enigmas of existence, and a constitutive longing to be ailleurs (elsewhere) are among the defining traits of the human. In general, mankind is “the metamorphic species,” hard to define, belying any and all “essentialisms,” but still possessing a core—one that is best approached indirectly by recognizing threats to it, threats with which our age abounds. Biotechnical interventions and projects are but the most salient. In these works, Delsol combines the philosophical aspirations of Manent with the literary pen of Bénéton.

Rémi Brague (born in 1947, professor emeritus at the Sorbonne and Romano Guardini chair of philosophy at the Ludwig Maximillian University of Munich) is a scholar of medieval philosophy, a philosopher, an amateur theologian, and a public controversialist. Five of his books have been translated into English. In keeping with the aforementioned themes, Eccentric Culture: A Theory of Western Civilization (2009) is must reading. Instead of the standard “Athens and Jerusalem” trope as the twin “roots” of Western civilization, Brague focuses on Europe and the central place of Rome in its formation and nature (which renders the English subtitle misleading).

“Rome” itself is ambiguous, referring to pagan Rome yet also to the Western—precisely, Roman—Catholic Church. What attracts Brague’s attention is that both Romes did not see themselves as simply independent and autarchic. The pagan Romans recognized the superiority of the Greeks in the domain of culture, the articulation and pursuit of genuine humanity, while the Christian church repudiated Marcionism and made its originating relationship to Judaism and the Old Testament eternally constitutive of itself. Deference and gratitude were thus built into Rome, whether pagan or Christian, together with justified claims of superiority. It is this complex mixture of pride and humility, of nature and grace, of human and divine rule, that constituted and defined Europe. To be sure, it was a mixture hard to theorize and live! And it is no wonder that some would find it insupportable, perhaps incredible.

In other books, therefore, Brague assayed learned intellectual archeologies to show how major pre-modern thinkers attempted the task of synthesis, and how major modern thinkers abandoned or dramatically reconceived that synthesizing task. Two weighty efforts in this vein are available in English: The Wisdom of the World (2003) and The Law of God (2008). The former retraces the varied articulations of the cosmos in Greek philosophy, scriptural religions, and modern science, and their normative implications; while the latter addresses “the divine as norm” especially, but not solely, in the three great scriptural monotheisms.

The chief polemical claim of The Law of God, executed with scholarly detail and deliberate understatement, is the sharp contrast between Christianity and Islam on the interrelated issues of the divine, normativity, and human agency. And along the way, Brague criticizes contemporary secular Europe for its ahistorical denial of its essential debts to Christianity. Read in tandem with Manent’s Metamorphoses, these learned books provide a fascinating histoire raisonnée of Western humanity, with enough disagreement between the authorities to force the reader to think for himself as he attempts to bring the two perspectives (one cultural, the other political) together.

As a controversialist, Brague has taken on widespread misconceptions that obfuscate public discussion about religion and society in Europe. I recently translated his 2013 work On the God of the Christians, in which he demonstrates that the easygoing concept of “the Abrahamic religions” is very misleading, and, more positively, shows in a variety of ways the uniqueness of the Christian idea of God. With this last-mentioned book, Brague makes clear that his is a faith seeking understanding. His others were essays in self-exploration as a child of the West and as a deeply grateful fils de l’Europe.

The same could be said of the other authors herein described. This should come as no surprise; as it happens, all are believing Catholics. Their Church invites them to such broad perspectives, and their faith gives them an acute sense of what needs to be conserved in today’s Europe and the West generally.

[1] For substantial reason, think: some combination of Aristotle, Socrates, Pascal, and Peguy.

The Countercultural Idea of a Christian University

The next great Christian university will oppose the combination of modernism and cultural ideology now regnant in the academy.

The Resistance and Socrates