Editor’s Note: This essay is part of a Law & Liberty Symposium on the Future of Debt.

When he chose spending as the focus for his general theory, John Maynard Keynes unintentionally set in motion a sequence of events that have been playing out over the past century. By focusing on spending and then aggregating that spending into what today we call gross domestic product (GDP), Keynes handed politicians a tool that had two uses: economic and political.

Keynes’ argument was that the government could smooth, or stabilize, business cycles by increasing government spending during recessions and decreasing government spending during expansions. We call this fiscal policy. Putting aside the fact that effective fiscal policy requires that bureaucrats be able to identify and react to business cycle turning points quickly, Keynes’ argument created two problems.

First, fiscal policy was a siren call to politicians. Keynes’ theory identified government spending as a fiscal policy tool, but politicians used it as a political tool. A politician’s goal is to get elected, and voters prefer politicians who bring more benefits than costs to their districts. Politicians could now promise to spend more government money in their districts and claim that this would be good for the economy. How do they know? Because experts say so. And spend they did. Federal outlays as a fraction of GDP rose from less than 15 percent of the economy after the close of World War II to 20 percent today.

The second problem is that, in treating all spending alike, Keynes’ theory failed to distinguish between production of things that people want and production of things that politicians want. In Keynes’ model, a dollar’s worth of grenades is indistinguishable from a dollar’s worth of guacamole. Consequently, the reality that people might be worse off when taxing and spending replaces consumer goods with government goods shows up nowhere in Keynes’ model.

Theory aside, the data do not tell a compelling story for spending as an effective fiscal policy tool. The graph below shows quarterly data from 1959 through 2018. The horizontal axis measures the quarterly growth in inflation-adjusted federal spending. The vertical axis measures the average quarterly growth in inflation-adjusted GDP over the subsequent four quarters. If federal spending were effective in stabilizing the economy, one would expect to see the dots forming an upward sloping pattern, moving from the bottom-left to the top-right of the graph: greater increases in spending would be followed by greater growth.[1] But the data do not show this. 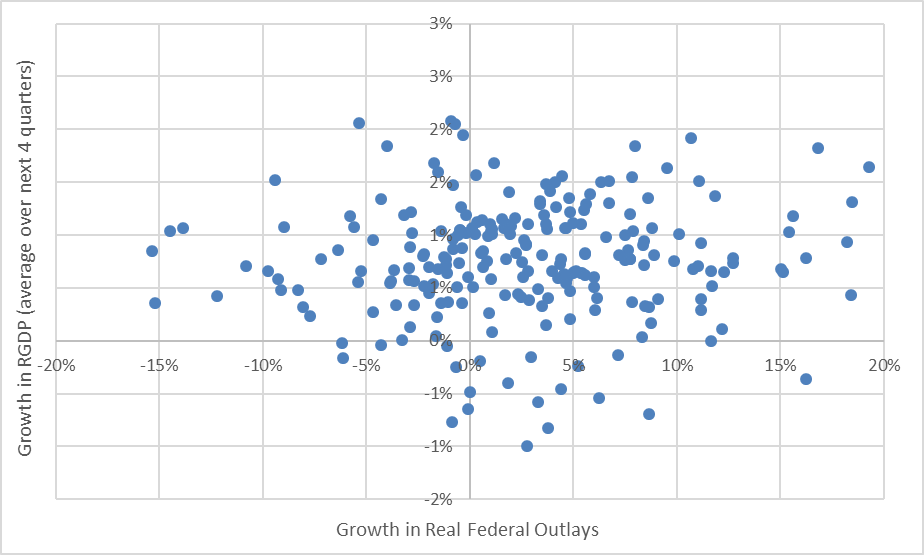 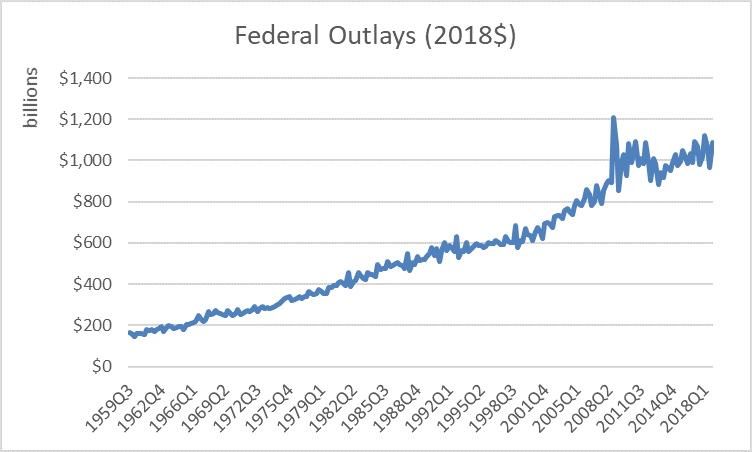 While the data raise questions as to whether spending works as an economic tool, there are fewer questions as to whether it works as a political tool. Even adjusting for inflation, federal outlays today are more than six times what they were in 1959. Voters perceive a benefit to government spending in their districts, and so they elect politicians who deliver that spending.

When the government borrows, it is requiring that future taxpayers pay for today’s spending via on-going interest payments. This method of funding spending has become so popular among both voters and politicians that the official federal debt is now more than six times federal receipts (the federal government’s annual income from all sources combined) – a level last seen at the close of World War II.

The unintended consequence of the government having borrowed so much money is to create a link between fiscal policy and monetary policy. The way the Federal Reserve fights inflation or cools an overheating economy is by raising interest rates. But, the larger the federal debt, the greater the chance that raising interest rates will plunge the federal government into fiscal crisis. It is simply a matter of time before the Federal Reserve finds itself having to choose between inflation and federal insolvency.

It is simply a matter of time before the Federal Reserve finds itself having to choose between inflation and federal insolvency.

The world's central banks are possibly facing an insolvency of their own making.

Skewering “the Pretense of Knowledge” in the Financial Realm

Alex Pollock punctures the mystique of the “experts”— including the Fed, “an independent governmental fiefdom of alleged Platonic economic guardians.”

The more blunders the Fed makes, the more power and prestige it seems to get.