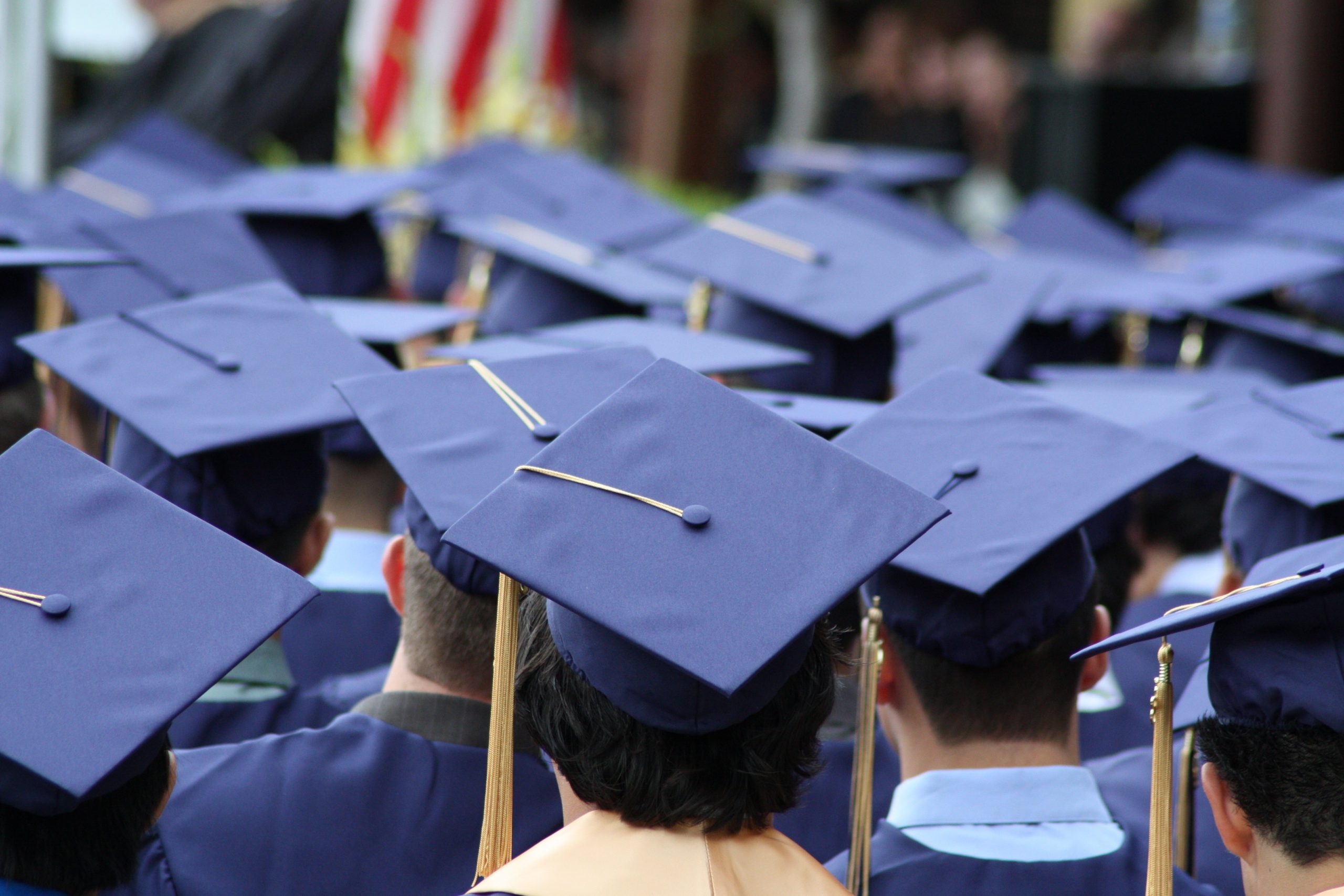 Graduation season is well underway. With all the excitement and regalia of the annual event, it might be easy to overlook the commencement address, an American tradition as old as the graduation ceremony itself. These addresses—and, in particular, the speakers invited by high schools and colleges to deliver them—have at this point become a regular source of controversy, protest, and even, on occasion, borderline violence.

There was a time when graduates saw the commencement speaker as that distinguished figure standing before them as the final obstacle to gaining their degrees. Following scores and scores of hours dedicated to study, what’s one more short, if slightly boring and innocuous, speech from an old sage claiming to have access to the secret recipe for success in life?

True, there were students who might have actually enjoyed their commencement speaker, although I suspect more than a few will carry into old age very little of what he or she said. For example, I remember exactly who our college commencement speaker was—Ohio State’s Archie Griffin—but to this day, while Griffin remains the only two-time Heisman Trophy winner in college football history, I still can’t bring to mind anything from his speech.

Then again, there are those who, whether on their own or moved by their mentors in the faculty or administration, respond to the commencement address in an altogether different manner. Believing it their right and duty, as their school’s unofficial vanguard against villainy and oppression, to dictate to others what can and cannot be heard from the podium, they protest commencement speakers whom they consider to be controversial. In almost every case where this has happened, “controversial” just means “conservative.”

Suddenly the commencement speech became a much more captivating sort of event. And this suggests, incidentally, that there may be something to be said for the importance of the input of students and faculty in the selection of a commencement speaker. Many facets of modern university life, from freshman move-in day to graduation, are already meticulously planned out by administrators, who in most cases exert complete, or nearly complete, control over the choice of a speaker.

Among the recent captivating/controversial instances: former Secretary of State Condoleezza Rice voluntarily withdrew from addressing the Rutgers University Class of 2014 after student-led protests—including the forced occupation of a campus building—frightened university officials. Also in 2014, Brandeis University disinvited Ayaan Hirsi Ali, a Somali Muslim and outspoken critic of Islam’s treatment of women and gays, following an intense showdown with a group of Muslim activists and radical faculty. The list of other recent silencings goes on: Robert Birgeneau at Haverford College, Christine Lagarde at Smith College, Robert Zoellick at Swarthmore College, and Dr. Benjamin Carson (now a presidential candidate) at Johns Hopkins University.

With these now-common acts of intimidation, which sometimes come with threats of violence, activists are succeeding in their intended goal: avoiding direct contact with diversity of thought and opinion. But they have also, and accidentally, succeeded in producing more public interest in this topic than there was before. The graduation speech now seems worthy of serious study, with value beyond graduation day. It is in light of these new and curious circumstances that the journalist and author Zev Chafets has given us Remembering Who We Are: A Treasury of Conservative Commencement Addresses.

This collection seeks to challenge the dominant tendency in higher education to prefer fashionable consensus to intellectual rigor and discourse. Conversation and curiosity are no longer the norm in the American classroom; they have been displaced by absolutism, disguised as political correctness, and in the pursuit not of a higher truth or power, but of power simply.

Chafets describes his purpose in the introduction: “to enlighten and inspire.” This is also, of course, the aim of any well-constructed commencement address. Specifically, the book is meant to “enlighten liberals by exposing them to new and unconventional thoughts,” and to “inspire conservatives—especially young conservatives—with the realization that there are plenty of brilliant, talented, and eminent men and women who share their views and who speak to, and for, them.”

Two monumental tasks, to be sure. While it may be impossible to judge the extent to which Chafets is successful in that endeavor, what is certain is that this little volume is a necessary and timely breath of fresh air amid the intellectual rot hanging over, especially, America’s elite colleges and universities.

An idiosyncrasy of the collection is its reliance on remarks that were spoken or written by their authors, but not formally delivered as part of an official commencement ceremony. Chafets loosely, but legitimately, defines the term “commencement addresses” to include many pieces that are either not speeches at all, or are speeches that were not spoken to graduating seniors. For example, the “commencement addresses” of Ayaan Hirsi Ali, Rush Limbaugh, P.J. O’Rourke, Thomas Sowell, and Bret Stephens are presented in this way. What Chafets is doing with his expansive editorial hand is underscoring that actual  conservative commencement addresses are pretty rare in today’s academy.

Not that there is a party line represented here. There isn’t. With its 30 influential thinkers, the book offers a wide range of perspectives—those of entrepreneurs, artists, humanitarians, writers, academics, economists, media broadcasters, Supreme Court justices, military veterans, and politicians (at least six of whom are likely or 2016 presidential contenders). There are contributions here from social issues conservatives, libertarians, tea partiers, moderate conservatives, and left-leaning Republicans. With only a few exceptions, most of the speeches are from after 2008 (that is, during President Obama’s time in office), heavily favoring those delivered last year. They include:

As the title indicates, all 30 men and women selected for inclusion are conservatives, though some of them probably would not call themselves such. Chafets is quick to point out that this collection, rather than developing a cohesive right-wing orthodoxy, is intended to “show the intellectual and cultural nuance on that side of the spectrum.” And so, as he rightly claims regarding the variety of contributors, “They would not all agree with one another on any particular issue.”

Take, for instance, the issue of illegal immigration. Mary Eberstadt, senior fellow at the Ethics and Public Policy Center in Washington, D.C., gave this advice to graduating seniors in her 2014 commencement speech at Seton Hall University: “Never, ever use  the word ‘illegal’ as a noun to describe a human being.” Are you listening, Mr. Limbaugh? (And consider that, even bearing this message, Eberstadt was protested by the campus Left at Seton Hall, students and faculty alike.)

This is the kind of book that anyone can pick up, turn to a random page, and begin reading with pleasure. And with its relatively short length (under 300 pages), it can be read from cover to cover in one or two sittings. It is meant for mass consumption, easy and fluid in style and prose, ideal reading for students, teachers, concerned citizens, and especially recent graduates. Its selections are suitable to the literary digestive appetites of one and all. Nor is every single selection from a university setting; one is the 2010 commencement speech given by Justice Antonin Scalia at Langley High School, a public school in Virginia.

Finally, the main title—Remembering Who We Are—deserves attention. One might assume that conservatives are the “we” indicated here. That is, conservatives need to remember who they are and can begin to do that by reading conservative speeches. However, since the aim is to break the partisan liberal blockade on graduation speeches, in fact on all forms of campus speech, with a book that is meant for everyone—Left, Right, and center—this misses the mark. It is as ill-fitting to readers as intolerant left-wing doctrine is to education.

The true meaning of the title must be that “we” takes in all students, and for that matter all human beings. The commencement address is meant to enlighten and inspire human beings by reminding them what it means to be human, particularly during one of the defining and formative milestones of a life.

Remembering who we are, then, demands knowledge of the distinctly human experience of living well, or an answer to the all-important question: how ought we to live? The commencement address (and hence this book) is always an attempt to answer that burning question.

Such utterance is turned aside or shouted down at our own risk and possible peril.

We would do well to remember it.

The Enduring Tension That Is Modern Conservatism

Diversity Bureaucracies are a Cancer on the Modern University