I appreciate John McGinnis’s account of the state of our liberty. He’s right that by some objective measures liberty is on the decline. But, a consistent individualist might say, liberty is on the march when it comes to same-sex marriage, legalized marijuana, and the general front of “lifestyle liberty.”

On this front, as the consistent libertarian Randy Barnett argues, judicial activism flowing from Roe and the evolving (well, Randy might say originalist) understanding of liberty as autonomy has been the source of significant “regime change.” Randy hopes that the Court will become as consistent as he is in applying the same preferential option for liberty over the law in cases concerning the economy. It almost did so in the ObamaCare case, and Justice Kennedy’s aggressive dissent there shows that he has evolved into close to the model libertarian justice. On the judicial front, we can also point to George Will’s recent praise of such judicial activism as what is or should be the mainstream conservative position. 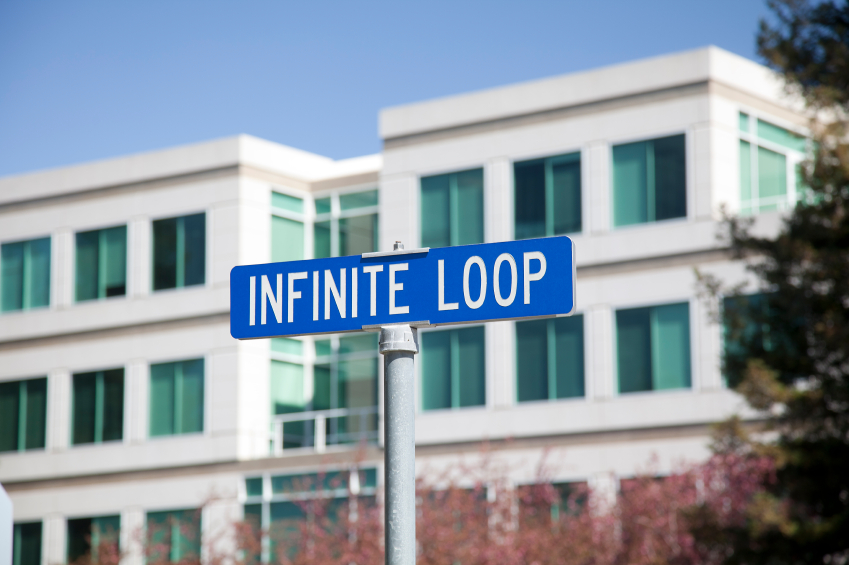 On the road in Cupertino, CA

On the civil liberties front, more impressive than what should have been rather unsurprising revelations about NSA surveillance has been the public’s negative response to them and the resulting rise of libertarian Rand Paul as perhaps the leading candidate for the Republican presidential nomination. But, let’s face it, the surveillance issue shouldn’t be regarded as simply or even primarily a big government problem. What about Google and the promiscuous generation of intimate big data for big profit (in both cases big is too small a word) by Silicon Valley in general? I note, for example, that Peter Thiel is, from one view, so libertarian that he wants to live on his own anarchist island, but he has no problem being a leader in advancing almost exponentially what can be known about each and every one of us by both government and mega-corporations. His contempt for democracy on behalf of liberty includes the thought that fortunately ordinary people are easily manipulated. Any comprehensive account of liberty today would have to come to terms with the alliance between Silicon Valley and the Obama administration, which could easily be branded some combination of somewhat irresponsible lifestyle libertarianism and a new and pernicious form of crony corporatism.

It’s true enough that envy is always a democratic issue, and it is always justly opposed by some form of the “trickle down” theory. Sure, those who Locke aptly named the industrial and rational are much better off in a free society, but most everyone is somewhat better off. Although envy, from a theological view, is a sin, I can also see that it’s against my self-interest once I see the connection between your hugely inventive and entrepreneurial job-creating success and my own far more modest but steadily growing prosperity.

In a free society, moreover, anyone who is industrious and rational–no matter what or where he or she came from–can rise to wealth and power based on real merit. That means that both justice and self-interest demand that I stop being envious and start working hard, and if I come up short, I have no one to blame but myself. But who can deny that social mobility is on the decline, as Charles Murray, for one, has explained? The argument for blaming the failing members of the lower middle class for their lack of virtue might have less and less explanatory value. And if Murray is right about “assortative mating” and all that, then the rich are not only getting richer, they’re getting smarter, and so less and less like most Americans. The real democratic remedies for envy are shared citizenship and shared opportunity, and there are reasons why the perceptions of both are diminishing.

Next to Randy Barnett, the most consistent and engaging libertarian I know of is Tyler Cowen. With disarming incisiveness and candor, Cowen has written that Average is Over. “Average” is the characteristic, of course, the middle part of the middle class. The “cognitive elite”–those who are comfortable inventing and manipulating genius machines and those who are really good at manipulating those who use genius machines–are getting richer than ever, and, from a productive view, they deserve what they have acquired and will acquire. Meanwhile, ordinary people are becoming more marginally productive, and that means that their lives will be increasingly less shaped by worthwhile work and personal wealth. Cowen anticipates that they’ll find life to be bearable by losing themselves in the various enjoyments they can find on screens. He anticipates that they’ll be too diverted (and, by implication, too stupid) to be envious or at least effectively envious.

All honest libertarians, such as Cowen and Thiel, acknowledge that robotization will result in the loss of more and more jobs, meaning that fewer people will really be productive. The optimistic Thiel emphasizes the good in this trend: People will be freed up for other things. But he can’t explain for what or with what money. They won’t have the wherewithal or the taste, for example, to join Cowen in being foodies. There are reasons to doubt that there’s going to be a new birth of aristocratic leisure or even of the flourishing of whimsical bohemianism that Marx unrealistically described as “the end of history.”

McGinnis criticizes even the Tea Partiers for being too much about cutting benefits for the poor and not enough about cutting the middle-class entitlements–meaning entitlements created for everyone–from which they benefit. He’s right that cuts have to come, and that our economy will eventually be wrecked if they don’t very soon. But choosing liberty over entitlements on which one has come to depend is a pretty high standard. It’s choosing against one’s own self-interest, something economists rarely recommend.

William Voegeli has written sagely that if people came to believe that Social Security and Medicare are unconstitutional, they’ll come to hate the Constitution (link no longer available), not the entitlements. So they could only reasonably be induced to choose those cuts if it were persuasively explained to them why they are unsustainable. The main reason is the demographic “issue”–too many old people and not enough young and productive ones. The demographic issue, of course, has been caused much more by our individualism–technological development in the service of personal longevity, prudent avoidance of risk factors that imperil one’s health and safety, and the decision to privilege oneself over generating biological replacements–than by a culture of dependency.

The good news we can see is that–thanks to these unintended consequences of burgeoning liberty– “the road to serfdom” never gets to serfdom. The difficult news that most Americans have to accept is we have to mend–not end–our entitlements with what we really know about our personal futures in mind.

The truth, more generally, is that our futures will be more individualistic. Employer and employee loyalty are fading away, as are unions and pensions and tenure and similar safety nets. More and more of us are going to function as independent operators selling our flexible skills to anyone who can benefit from them at the moment. The 21st century global competitive marketplace is, in many respects, in the service of personal liberty. These new births of freedom, to tell the truth, are changes many of us can only half-believe in.

A final observation on the self-interest front. Lots of libertarian political activity these days is funded by billionaires interested mainly in lowering taxes and taking out government regulations. I don’t deny for a moment that their reformist agenda serves liberty, and that the reformers embrace it out of principle. But we can’t forget that, in their case, principle and self-interest are quite obviously on the same page. And we lovers of liberty have to think clearly about the ways in which many or most Americans are having more trouble than ever connecting the principles of liberty with what’s best for them.

I don’t have a rousing conclusion here. My only intention is to add some complicating factors in thinking about the state of liberty today. If I had more time, I would explain why excessive concern with the individual is at the expense of who we are as free and relational beings. Those who say we have to choose for either individualism or collectivism aren’t thinking clearly enough about who each of us is.

Uber Is a Force for Equality