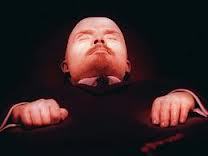 Both the London Times  and the Washington Post  carried at the week-end (Jan. 12 & 13) reports that Lenin’s embalmed corpse might later this year finally be buried, after having lain on public display in a mausoleum in Moscow’s Red Square for the past eighty years, since the Soviet leader’s death in 1924.

Both newspapers linked their respective reports to the recent closure of the mausoleum to the public, pending major structural repair, as well as to remarks in defence of the continued display of Lenin’s remains there, made last month by President Vladimir Putin at his first meeting with campaign supporters since his inauguration in October.

According to the Kremlin’s website, the meeting was attended by ‘representatives of public associations, intelligentsia and arts communities, prominent scientists, sportspeople, [and] journalists’, as well as by campaign activists. At its termination, the Russian President was asked about the moral threat Russians, especially the young, faced from a dissolute media. In response, President Putin said:

Yes, we do have that problem. Of course, it is multidimensional and is due to many factors, including the loss of certain reference points. After all, what happened after the fall of the Soviet Union and its prevailing ideology? We did not gain anything new in its place. Incidentally… even the communist ideology took its main principles from the world religions. What was the Communism Supporter Code about? It declared the same principles as the Bible or the Koran – do not steal, do not kill, do not covet your neighbour’s wife. It is written in and borrowed from those texts.

Many people argue about the Lenin’s Tomb, saying that it does not follow tradition. What does not follow tradition? Just visit Kiev Pechersk Lavra or go to Pskov Monastery, or Mount Athos. You will see hallows of holy people there. Go ahead, you can see it all there. Therefore, the communists continued the tradition even in that respect and did it competently, in accordance with the demands of those times.

But we must return to our historic roots. We must work on educating our youth, on teaching them patriotism based on our traditional values, but of course also bring them up as modern individuals, striving toward the future. Then, a great deal will change on the television channels themselves. Although, of course, the mainstream media must fight not only to increase their ratings and advertising minute prices, but also to assure an educational influence on its viewers. You are right.

Nauseating as the analogies that he drew are, one cannot but admire President Putin’s brazen chutzpah in both alleging that the Soviets had drawn moral inspiration from the teachings of the Abrahamic faiths, especially concerning the wrongness of murder, as well as in having likened Lenin to a saint, whose remains, like theirs, merit display and veneration. Nothing could be further from the truth in either case. But, then, I suppose, what else can be expected from this former lieutenant-colonel of the KGB, and open continued admirer of Soviet communism?

Removal of Lenin’s remains from public display, and their committal to the ground, would enable Russia to move on from the communist era, and even begin to come to terms with the moral atrocities committed during it. But possibly Putin is too morally compromised by his own longstanding participation in that regime to allow him to do anything that might call into question its moral legitimacy and therefore his own. Indeed, as recently as 2005, President Putin reportedly (link no longer available) referred to the collapse of the Soviet Union as ‘the greatest geopolitical catastrophe of the 20th century’.

Instead, if anything, we see in some of President Putin’s recent policy decisions a concerted effort to return his country to rule by a state so savage in internal repression and centralized in control as would threaten to undo the work of Glasnost and Perestroika begun during Soviet times under the presidency of Mikhail Gorbachev, and continued after the collapse of that regime during Boris Yeltsin’s tenure.  (For details of Putin’s repressive policies, see the excellent report about him in the New York Times, updated on December 27 2012.)

The truth is that the Soviet regime was fiercely anti-Christian, as well as deliberately and quite self-consciously unmoored from the Judeo-Christian ethic. No one who occupied leadership of it was more so than Vladimir Ilich Lenin who merits continued posthumous glorification as much and as little as do Adolf Hitler, Idi Amin, Saddam Hussein and Osama bin Laden.

Although a lengthy probe conducted in 2008 by the Russian state prosecutor’s office into who was responsible for the assassination in 1918 of Tsar Nichols II, his wife and five children failed to find any evidence linking Lenin to their fatal shootings, the chief investigator in that inquiry concluded Lenin had been complicit in these murders by endorsing them and in failing to punish those who had carried them out. In any event, horrific as they were, these murders form but a very small part of the iniquity that can be leveled at Lenin and the continued veneration of him.

No one has better documented the case against Lenin than the Russian historian Vladimir Lavrov, chief researcher at the Institute for Russian History of the Russian Academy of Sciences. Writing in September 2012, Lavrov has usefully documented statements by Lenin that reveal just what a mockery of the truth it was for President Putin to claim the Soviets were inspired by a Judeo-Christian ethic and to have likened Lenin to a saint. As regards President Putin’s suggestion that the Soviets were inspired by Christian moral teaching, a few choice vignettes from Lenin’s works that Lavrov quotes reveal the true relation between his teachings and Christianity:

Lenin practiced what he preached, as is made clear by the various following directives and ‘imperatives’ Lavrov quotes Lenin having issued as revolutionary leader:

Some Kremlinologists have claimed that President Putin has regularly reignited the controversy over what to do with Lenin’s remains as a way of splitting the opposition to him and diverting public attention in Russia from embarrassing news of which there has lately certainly been no shortage. One such piece of potentially embarrassing news for President Putin has been a recent revelation about Alexander Litvinenko, the former FSB officer who gained asylum and citizenship in Britain in 2000 after publicly accusing Vladimir Putin of being responsible for the bombings in 1999 of two Moscow apartment blocks to serve as a pretext for invading Chechnya, and who subsequently died mysteriously from polonium poisoning in 2006 after taking tea with two Russians in a London hotel. It was revealed that he had been in the pay of both the British and Spanish secret services and about to expose more alleged dirty tricks by Putin.

Maybe, a lot more water in the Don needs quietly to flow before Lenin’s remains can be laid to rest, and Russia, and the rest of the world, finally escape the residue of its Soviet past.

A Program of Integrated Frivolity

The Bolshevik takeover in the so-called October Revolution sparked a civil war in Russia that ended in 1922 with a Bolshevik victory and the establishment of the Union of Soviet Socialist Republics.

When Susan Sontag Told the Truth about Communism